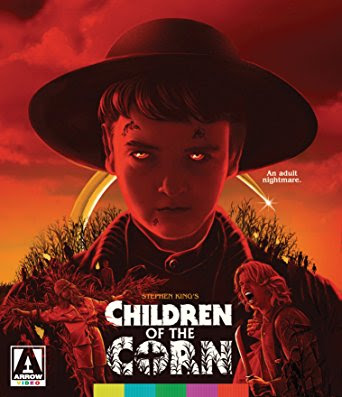 There are a handful of horror franchises that probably shouldn’t exist. Children of the Corn is one of those. It’s not that the original 1984 film is a bad one, it’s actually held it’s own in the 30+ years since its release, but it’s a series that has taken a massive nose dive in quality that it should never have existed past a few sequels. With a horrendous made for TV remake and an upcoming sequel that Dimension seems reluctant to ever release, it was a wonderful reminder through this latest Blu Ray edition of Children of the Corn that strikes a chord for horror fans. It’s a reminder that this series wasn’t always a black hole of horror creativity. Featuring a nice new 2K version of the classic film and a slew of special features to go with it, this release showcases the film nicely for established fans and those looking to perhaps dig into the franchise for the first time. It’s a film that wears some of its flaws on its sleeves in obvious ways through its budget constraints and strange third act, but it’s also one that does some admirable things too and deserves a refreshing look.

Based on the Stephen King short story, Children of the Corn has a couple of key elements that play into its favor as a film. Mainly, the film is a rather simple one that keeps things pulled back and straightforward while focusing on a young couple who stumbles into one strange and horrifying situation. Outside of a finale that does go a bit cockeyed, Children of the Corn sticks to some slasher tropes to deliver its thrills and kills for the audience and it’s this simplicity that works for it. Our couple, smartly cast with the likable – and believable – performances of Horton and Hamilton, are easy to side with by the audience as they attempt to always do the proper thing in the film. This franchise starter focuses on building their relationship and not fruitlessly dropping tons of awkward slaughter fodder in useless side characters. As they find themselves heading into Gatlin, a town where the children have risen and murdered all of the adults for the sake of their ‘religion,’ the film layers in plenty of solid character-building scenarios and increasing tense situations to make the audience feel uncomfortable when it’s revealed to the characters that the children are, for the most part, the villains of the film. Having children, both good ones that help them and bad ones that try to take their lives, makes the film feel much more dire and intense. Just the opening scene, which is a tad awkward with its rather forced voice over material, still feels terrifying as we see the kids turn against the adults around them. Partner this with two protagonists that deserve to be rooted for and it makes for a simple and very effective build to the film that generates some great scares.

The simplicity works in this manner and through that Children of the Corn is also able to create a fascinating world for the characters and situations to inhabit. For a film that occasionally stumbles into some very cheesy territory with its slasher elements, it also has a charming knack for establishing some sly commentary underneath it all. The obvious connections about religion are established right away, but the film goes a bit further in its social commentaries about children and adults, the core concepts of family, and some supernatural elements that punctuate all of those things. Both good and evil children to populate Gatlin, the film establishes a much more complex situation for its characters and for how the audience should feel in regards to them which makes the film uncomfortable even when it starts to become cheesy or unbelievable.

It also punctuates the tone with the surprising quality of performances from the actors. Considering that Children of the Corn is a remarkably low budget film that has to find ways showcase its themes, style, and scares on a limited budget, the film makers found a rather robust and believable group of actors and actresses to fill the roles. There are some that struggle a bit when it comes to the kids, but between our strong lead adult protagonists and the fantastically creepy villains (I will never trust a Malachai to this day) the film is pretty impressive. It works well with the atmosphere and slasher tropes to deliver the classic 80s horror goods.

And while Children of the Corn is certainly a bona fide classic of 1980s horror that holds up remarkably well despite its low budget and decades of passing, this Arrow Video release is a stark reminder of why it should be when the terrible sequels soil its original concept. The new restoration is a big step up from my original Blu Ray and the sheer number of special features is worthy of the watch even for those that may not be a fan of the film itself as it gives some fantastic back stories, interviews, and material for horror fans to dig into in a historical context. There is a brand-new commentary and full documentaries too just to make sure the icing is slathered on the cake. Not only is this latest release the best very released thus far, it’s easily the best one by a long shot.

So whether you have been lost in the corn maze of shitty sequels or stand up for the series, this latest and very impressive Children of the Corn release is a reminder of why the film was impactful enough to warrant such a long lasting impact. The film, despite some obvious flaws, is still decently effective, somewhat brilliant with its approaches, and pops with fun moments that make it stand out from its peers of the era and the rows of sequels that follow. Arrow Video gives it the shrine that fans expect in this release and it can’t come recommended enough. 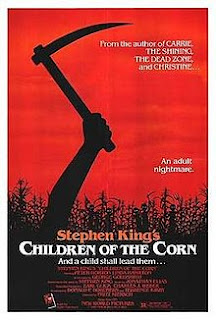