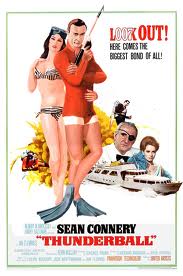 For our fourth outing with mainstream Bond, we take on the giant scope of "Thunderball", a film that makes a love/hate relationship seem easy. Of course, we are still in the 'classic Bond' stage of the series and many fans swoon over this one too, but for me I find that too many of its flaws undermine the really good parts of this film.

STORYLINE: Is it a bird? Is it a plane? Fuck yeah, it's a plane, and SPECTRE plans to steal nuclear warheads off of it! If SPECTRE is involved we better put 007 on the job, right? I suppose. The diabolical dealings of our monstrous anti-hero group have to do with holding the US and Britain ransom with some stolen warheads for a shit load of money. Why money? To do other evil shit, of course! So 007 (whom just happened to be at the right place at the right time) is sent to Nassau to investigate Largo, a very rich man with an eyepatch whom Bond thinks has some serious doings with this bomb theft.

PLOT 3.5/5: Honestly, I love this plot. It's a bit over the top considering the film feels like it wants to go more serious like the first two films (where it runs into some issues) but the scope of this film is pretty impressive. Much of the film has underwater dealings which is a new place for Bond to be badass but at times these underwater scenes drag ON and ON and ON. Even the final 'battle' at the end with spear guns and knives and random explosives feels way too slow and way too drawn out for its own good. I do appreciate the more serious tone of the film and its approach though. Although it is grand in its plot, they play it very realistically for the most part. Honestly, the reason this film loses points for plot is because of three things. 1) The pre-credit sequence is completely retarded. Really? you happen to have a jet-pack and a car that shoots gigantic streams of water from its tail pipes? WTF. 2) The pacing of this film drags on, like I mentioned. 3) The film feels like it should have been even longer. The ending seems to come very quickly. Some of the more detective things seem ridiculously rushed. Like his partner Laura - who the fuck is she?

BOND 4/5: Connery returns as Bond once again for this one. And like I mentioned prior, he is pretty awesome at the job. I like that he is once again kind of a dick in this one, for example I love that he fucks with Largo at the card table insinuating things through blatant word play. The plot suffers the character more often than not in this one as they rush through some things and drag on others.

VILLAIN 4/5: I like Largo. What kind of man keeps a personal military on hand, wears an eye patch, embroiders Octopi on everything, and keeps a lagoon of sharks on his property? This guy does. Not to mention just looking at that list makes him a probable suspect for most things evil. How can he not be Number 2 in SPECTRE?! Not to mention he keeps a giant boat that can split in two and become a speed boat. Fuck yea. Granted, the performance of Largo is solid and he does seem evil. He is a bit over the top for all the reasons listed above. His henchwomen is a solid choice though. She's a bitch first and foremost and she tells off Bond a few times. I love the scene with her and Bond in the car when she is driving him to the hotel. TEN-SION! Did I mention she is also bat shit crazy?

BOND GIRL 3/5: Oh Domino. How much better could you have been? She just kind of flounders around the film for the first chunk and only in the third act does she actually have any weight to her character. The last act is good for her character (not really) with her final conversation with Bond and the few final scenes with Largo. She would have been the worst thus far without these moments to make her character more relevant.

Overall, I enjoy "Thunderball" but of the Bond series thus far, its the weakest. Its too long, not long enough, it starts off to a pretty stupid path, and can't decide whether it wants to be corny or not. It does have a solid villain and Connery as Bond and there are great moments (including the plot) but they aren't enough to balance the film. It's good, but not that good.