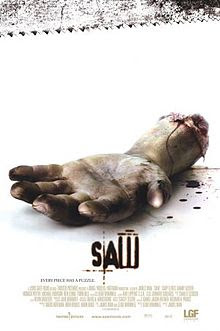 To say I'm a fan of this film is somewhat of an understatement. Saw it three times in theaters when it came out, and have owned it since day one of its release with many watches down the hatch at home. I find this film to be immensely entertaining and clever for the time period that it was released and one that, despite some flaws, holds up even when the nostalgia goggles of my youth have been removed. Saw is a film that takes its exploitative elements and gives them a fun and smart modern twist that balances its use of limited budget to maximize its entertainment value.


Saw tells the tale of two men that awake in a locked room shackled to opposite corners. These men then have to play the game of the sinister "Jigsaw" whom has set up a trap to have them learn life lessons and appreciate the lives that they are throwing away. Intensity, flashbacks, and twists occur until the two men are pushed to breaking points about their priorities in life.


It's not like the horror film with a moral lesson is anything new, but the manner that Saw approaches it at least feels fresh and fun. It's entertaining to see filmmakers try and inject some kind of moral stance into their horror films and Saw takes this to a new level. And not just the 'don't fuck with a stranger who has a knife' kind of lesson. It's a lesson in taking things for granted and how one views life. In a way it's almost a meta concept to what the horror film is as a whole. A kind of lesson taught through violence and extremism that serves well beyond the film on hand. It's an interesting aspect that many horror films don't touch enough and its respectable that Saw did it using layers for its concept, plot, and characters. It's like a modern Grimm fairy tale with its monstrous moral at the end.

The plot and narrative is naturally the focus of the film though well above the usual horror cinematic intent. At a time when movies needed to have that 'twist' to be legit shockers, this film attempts to truly develop a momentum and mystery that continually builds until its impressively executed third act. This focus can be problematic for other aspects of the film though. The acting at times could have been better (Danny Glover is just awkward in the film and the two leads, played by newcomer and Saw writer Leigh Whannell and Princess Bride alum Elwes, struggle at times to reach the places they need to go) but the more than solid visual work from James Wan and the intense story is enough to suffice and make this film work on multitudes of levels. It's easy to see how this film would set the standard for mid 00s horror in style and Wan continually impresses to this day. His work here is a bit rough around the edges compared to his later material, but the core concepts still sell the entire film well. It can be a bit too modern for many exploitation fans with its flash edits and stylish bombarding visuals and camera tricks, but, once again, the core effective foundations more than give it a bedrock to work.

Still, as I revisit the series, it's easy to see how Saw balances classic exploitation entertainment with a spin on modern horror that still works to this day. Wan directs the hell out of film, injecting tons of great tension and visuals to fill in the gaps of the performances or script, and the film's meta layers make it one that continually reinvents itself as a horror film that is still worthy of watching.