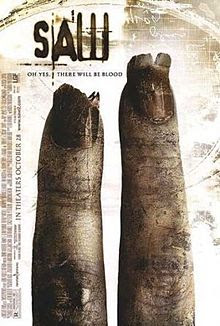 In the first of numerous sequels to come, Saw II has some trouble matching wits as its predecessor. It has some great moments and it has some stinkers too. Even though one can expect that this film will have twists and a surprise ending to go with its style, Saw II still accomplishes quite a bit despite the lofty expectations set by the original, but too many cliche elements in the film bring it down again and its ambitious continuation of the concept creates too many problems for it to solve on its own.


Once again, the narrative is our focus here and it is a whopper as it extends out the "universe" of the Jigsaw killer. Detective Eric Mathews (our flawed hero of the day played predictably by Donnie Wahlberg) is able to apprehend Jigsaw quite easily only to find he has fit himself in as a cog in one of Jigsaw's now patented games. The new game includes a trapped house full of ex-cons who have to work together (or tear each other apart?) to find and use a set of antidotes that will cure them of a deadly neurotoxin that will kill them in two hours. Sounds pretty slick, eh? Despite some odd jumps in the story of logic in the story that seem there more for plot progression than anything else, the story once again is our saving grace for the film. It's lucky too, as some of the other elements don't quite hold as well to the clever tale.

The acting is perhaps its biggest speed bump in Saw II like the original. Overall, it's perhaps better than its predecessor, but that's not saying a whole lot. Granted the story does not do the cast a lot of favors by including far too many players to actually build any relationship with and the character development suffers from limited screen time. The film has two essential plots, one including the interrigation of Jigsaw by the detective and then there is the trap house with the ex-convicts, and it's a tad too much to pull off ultimately to get the audience invested in the characters, their connections, and their plight. Thus, when we have some of the people in the house getting knocked off (this is not a spoiler because you knew it would happen) the audience doesn't particularly care. The blonde girl, who's name completely escapes me despite seeing the film multiple times, dies and honestly I muttered "Finally!" under my breath as she acts more like an annoyance that a true aspect to building the tension between the team as she was meant to do. It's not just her though. Even the main players give us some lackluster performances in the house and their characters don't exactly intrigue outside of some obvious combative characters to knock up the tension. Truthfully, the scenes between Wahlberg and Bell as the detective and Jigsaw are the highlights of the film in tension and that's simply due to the nature of now the narrative is built.

Also, Saw II sees Wan exit and Darren Lynn Bousman jumps on board as director for this sequel (and the next few.) Although he has some nice moments including his very solid pacing and more intense moments of classic horror bits like the "chase" through the tunnels at the end of the film, but overall his work isn't quite as slick and stylish as the first film had. It uses a lot of the same elements (the oddly sped up car parts are something he probably should have cut in replicating what Wan was doing) but not quite as effective in the end. It's solid, just not as solid as it could have been.

Of course, like the original, it's the finale that truly hits the bell at the top of the hammer game. For all of its problems getting there with bland and cliche characters and too much plotting in its parallel narratives, Saw II absolutely destroys in the final 20 to 15 minutes of its run time. It builds nicely to keep its audience on the edge of their seat and the way that the two narratives twist together make for a fantastic reveal at the end proving that this series was not a one trick pony when it came to that third act plot twist. Naturally, you won't find spoilers here, but make sure you take note of the details of Jigsaw's game as they always come back to haunt those that don't.

Saw II is still quite enjoyable, and I immensely enjoy how much of a sequel it is (all the references and ways it fits into the first Saw film is quite impressive) and its story keeps an audience tied down as it progressively builds to its finale. Too bad too many cliches and not enough time for all the characters bogs it down too much in the end. Solid sequel and one of the better ones for the franchise, but it's hardly perfect.