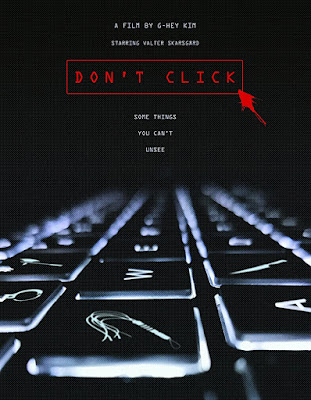 There is a sense of discovery to watching films at a film festival. Perhaps films that have not been seen before or ones that have completely flown under the radar for the majority of film watchers. Unless you work for one of the major news outlets, more than likely there is going to be a handful of intriguing discoveries made while attending a film festival. Mile High Horror Film Festival is no different. It’s been a handful of years since I had the pleasure of attending this one and while 2020 has certainly made it a wholly unique virtual experience, once again it’s a place to find unique films. Don’t Click is the first of such films. While the film occasionally suffers from its limited budget and other hit or miss elements, it’s also a film that takes a wild swing in trying to combine a plethora of lofty ideas while simultaneously injecting a bit of social commentary into the mix. It’s an intriguing combination that proves to be the perfect kind of film festival discovery.

When a young college man, Josh, played with a surprising range by Valter Skarsgard, discovers that his friend and roommate has disappeared, a quick search leads him to his laptop where a violent and pornographic website is streaming. The site leads him down a rabbit hole of strange dreams in a torturous dungeon room, memories, and what may or may not be the current reality he is living.

Stitching together bits and pieces of incredible slices of horror cinema history, the influences on director and writer G-Hey Kim become only more apparent as Don’t Click progresses. A slab of Hellraiser, some Videodrome, and a dash of post-modern Jacob’s Ladder inspiration all warp into one brisk tale about the excesses and disconnect of the modern young man. Bounding between multiple realities, there is a looseness to its narrative that indicates logic and more traditional storytelling elements are not the focus of the film. Instead, Don’t Click aims for more dreamlike elements, bigger messages, and vague characterizations to fuel its social commentaries. There is plenty here to dissect for those willing to leap in, whether it’s the need for constant gratification, the addiction to online elements that leave us disconnected from the real world, or how the need to save others leads us to our own demise, and it’s this portion of the film that certainly makes it a fascinating watch.

On the more traditional surface level, Don’t Click can be a tad muddled to truly live up to its lofty messaging and narrative goals. Its leaping time structure bleeds into its dream logic qualities, but it ends up too loosely played to have the impact necessary to carry the rest of the film. The same goes for its performances. While both Skarsgard and Koufos get the job done, the speed of the film and tone never quite capture their chemistry as friends to dictate much of its character and emotional core. When Josh ends up in the dungeon-like dreamscape throughout the film, there are some fun gore moments and Hellraiser inspired debauchery to be had, but it’s limited budget and lacking sense of crafty direction tend to undermine the punch. All of the pieces for a fantastic film are there, but the execution always seems two inches off the mark to make it to the next level.

As mentioned though, Don’t Click ends up being one of those fascinating film festival finds though for the sheer ambitiousness of its script and how it attempts to push the boundaries of its limitations. There is a spunky attitude with its material that makes it an entertaining watch, helped by its incredibly brisk run time of 77 minutes (give or take.) Ultimately, the film is a mixed effort, hindered from reaching top speeds by budgetary constraints and a lacking depth to many of its messages that would have been brought to light with some digging into the characters and plot. Horror fans will find a fascinating watch, but one that wears its flaws in some obvious ways.