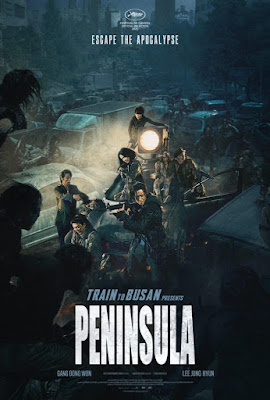 In 2016, South Korea fired one hell of a shot into the arm of zombie cinema. That shot was Yeon Sang-ho’s horror with heart film, Train to Busan. A loose sequel to his animated zombie flick, Seoul Station, Train to Busan came out with a bang. Immediately it was making lists for best zombie films, best modern horror films, and best films PERIOD for the year and the decade. I was a big fan myself and its international success only laid the groundwork to spawn a sequel. Fast forward to four years later and the follow-up, also directed by Yeon Sang-ho, has now been unleashed in theaters. Peninsula, or as it has been stylized for the US release Train to Busan Presents: Peninsula which I refuse to use as its title, is quite the fascinating next chapter of this series. It’s a high-octane shotgun blast of an action flick with a loose heist narrative based in the world of Train to Busan and, while mileage may vary for audiences going in, it never, ever, ever ceases to entertain.

Taking place a handful of years after the initial outbreak of the zombie horde, the majority of the run time for Peninsula is spent a short time in the future. A soldier (Gang Dong-won) is recruited in Hong Kong to help a small team of hired guns to go back into South Korea to find a specific truck that was loaded with cash before the country was overrun with zombies. Naturally, a rogue military group ends up with the cash and our hero, along with a rag tag group of survivors, must find a way to get the money and make it to the extraction point. Peninsula is not just a ‘survive the zombie swarm’ flick like its predecessor, but it’s as if a simple heist film was plugged right into the middle of the military concepts from Day of the Dead.

In all, it’s a smart move for director Yeon Sang-ho to not try to fully replicate the successes of Train to Busan. If you already damn near perfected it, why even try to compete? That was what made each of the original trilogy of Romero Dead films so strong and conceptionally it should work here. In that line of thought, the influence of Day of the Dead is very heavy here – whether intentionally or not since it’s an idea that has been continually ripped off for the last 30 years. Still, including a rogue military unit with some insane characters, who believe the entire world has gone to hell and not just South Korea, makes for a strong dual antagonist group when partnered with the hordes of insect-like zombies. In fact, the film could have focused a bit more on the hierarchy and anarchy of their camp. Yes, the zombie game of tag is certainly insane, but it’s only one part of the camp and the film rarely spends the amount of time or nuance to deliver on the darkness it might have with it.

Fans of zombies may find that, ultimately, the zombies are less of a threat and more akin to a series of speed bumps for the protagonists. The makeup is well done and an initial attack on a boat in the opening sequence delivers on the scares, but the focus of this film is far from being a horror film. It’s firmly rooted in its action. There are a handful of CGI heavy vehicle chase sequences that deliver on the promises of a Fast & Furious influence – mixed with a Resident Evil influence (sigh) with the amount of hit or miss visual effects in each shot – and it’s here that the film earns its entertainment badge along with the thought, ‘I wish this had more practical effects.’

As a final point to Peninsula, it should be noted that while Gang Dong-won serves as the main protagonist, the narrative and script treat the film more like an ensemble effort which serves as a double-edged sword. It adds a lot of layers to the expanded world and adds plenty of fodder for the body count from both person and zombie, but it waters down the ability for the film to develop any one character. Whether it’s the group of mercenaries sent into South Korea, the family desperately trying to survive (the MVPs of the film end up being the two young girls in this camp, truthfully,) or the military group, there is a lot of characters to dissect and the film simply does not have time to do so. Instead, it creates broad stroke characters that serve to move from plot point to plot point. Where its predecessor succeeded in creating a small band of relatable and heartfelt characters to drive the emotion home, Peninsula struggles to find that balance.

For those looking for a different zombie experience, one that is often more akin to a being the best Resident Evil film force-fed some wild Fast & Furious action set pieces, then Peninsula will certainly suffice. It delivers on entertaining action impact with a slew of morally questionable characters that litter the post-apocalyptic landscape. Where Peninsula suffers is that it cannot compare to the strengths of its predecessor in character and narrative flow, but it attempts to make up for it by being a different film altogether and focusing on a heist concept and tonal changes. Nonetheless, if you wanted to see a full-on Mad Max inspired third act demolition derby chase with zombies as environmental hazards, then Peninsula delivers with rib crushing zealousness.