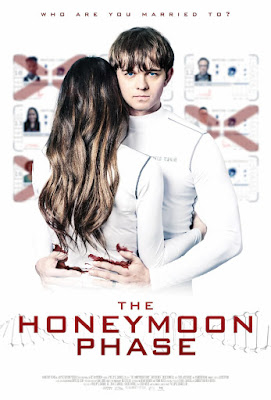 Why is it we are so happy early in a relationship, and why doesn’t feeling last? That’s the question that starts The Honeymoon Phase, and although it doesn’t necessarily persist through the film thematically, it does stand as an interesting launching point for a slow burn sci-fi thriller. There is a persistent, uneasy feeling throughout the movie making it clear there is more beneath the surface, though the film is mostly careful and glacial with revelations, the threatening aura feels laid bare early.

Tom and Eve (Jim Schubin and Chloe Carroll) are a young couple going through some financial difficulties, especially since Tom is a writer with a years-long case of writer’s block. Eve discovers a study offering fifty thousand dollars to newlyweds to stay in a home together for thirty days. Seeming simple enough, they decide to pretend to be married for the money. Everything seems to be going along well early, save a bit of uncharacteristic aggressive passion from Tom, until one-night Eve sees Julie, another test subject she met earlier, frantically pounding at her door begging to be rescued from her husband. The door won’t open and Eve is forced to watch as Julie’s husband attacks her and drags away the body. Even worse, no one believes that it happened. Even the security footage betrays Eve as she begins to think that maybe she’s under threat as well.

The movie conjures some really brave and interesting feminist theming including sexual assault (and a form not often confronted at that), women’s rights, not to mention the above-mentioned accusations of delusion and hysteria, as Eve suddenly finds herself very pregnant and Tom being completely unwilling to discuss any options. Not to mention a plot thread where The Director (Chau), expressing concern for Eve’s mental state, threatens their position in the study, and the payout, forcing Eve to put on a happy face, so to speak, a prisoner both in her home and own body. Unfortunately, as strong and thought provoking as this theming is, a lot of it is dropped in service to reaching the finish line, and that’s where I feel this movie falters a bit.

Although the first two acts are slow-paced, moody, and captivating, at some point it feels like the script just sees the finish line and breaks into a spontaneous sprint. Revelations about what’s happening occur at a shocking pace leaving each feeling a bit flat and characters suddenly change scene to scene in a way that makes sense to the narrative goal of the scene, though occasionally butt heads with how these characters act previously. Also, once the final twist is revealed, it leads to a reasonably predictable conclusion, which is a bit disappointing in such an otherwise enrapturing movie.

None of that completely undoes the film as a whole, however, and a lot of The Honeymoon Phase feels like a first-time feature director with something to really say. I think that what’s on-screen is still an entertaining watch that at least implants a few important questions in your head. I’ve definitely found myself considering a few of the questions it’s raised, and it has stuck with me, so despite my opinion that the film stumbles at the ending, it’s still a journey well worth taking.