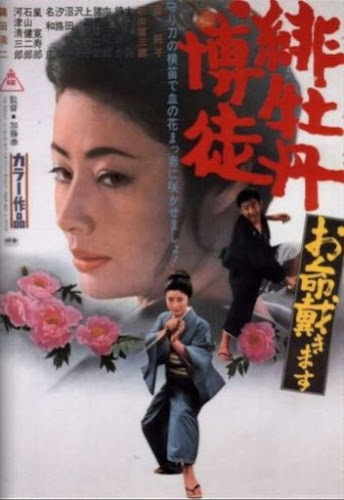 As we reach the final stretch in reviewing the films in the main Red Peony Gambler series, it’s fascinating to see how each entry takes the basic formula, themes, and characters and then adds just enough individualistic pizzazz to set them apart from one another. Even if I was binge-watching them all in a row, there is a sense that many of the entries would pop due to these small and often unique tones. With that in mind and the general roller coaster ride that goes with the quality of the films (most are solid with just nuanced shifts of effectiveness to their storytelling,) the seventh entry of the series, Red Peony Gambler 7: Here to Kill You, is a shockingly impressive entry. The story is impressively relevant to this day, there are plenty of key sequences to appreciate, and there is an emotional journey in Oryu’s story that makes it one of the more poignant entries. It’s not without its flaws, but for fans, this one easily stands out as one of the franchises best.

After Oryu, once again played with dramatic punctuation by Junko Fuji, saves a man falsely accused of cheating at gambling, she ends upside stepping into a very unique situation. A small town on the verge of riots against a new factory that has killed their crops, tainted their water, and polluted their air. With the help of a local yakuza representative, a single father trying to navigate the power struggle of local leadership, business owners, yakuza, and the military who have an investment in the factory, Oryu looks to right some environmental, big business, and military overreach to save the small village.

With its stark environmental angle, Here to Kill You stances itself with some unique messaging for the series. Not only does it take on pollutants affecting the small town lives and economy, but it does it by criticizing how government, military, and nationalism play into those factors – that ‘what’s best for the country outweighs what’s best for the people in that country.’ It’s at times a scathing critique in small ways, how the farmers are unable to use traditional customs due to the now poisoned soil or how arrogantly the military and business owner beat the local yakuza representative when he stands up to them. Even if Oryu didn’t show up, Here to Kill! might have held on its own with its thematic cuts and jabs. The narrative impact of its anti-corruption cornerstones, paralleled with the townsfolk and the character arc of the yakuza rep, Kikutaro, make for a well written intertwined story that echoes strongly even 50 years later.

Naturally, that’s mostly the table setting. While Kikutaro’s story with his son and their plight against corruption carries the film, this is ultimately another tale of the Red Peony, Oryu, and her continued quest for justice. Here to Kill You nails all of the ninkyo eiga elements of justice and honorable ass-kicking for the tattooed queen of gambling and knives. The film is able to key in on her emotional attachment to the situation through her relationship with Kikutaro and his son, the latter allowing her to have some fantastic moments of chemistry with the young character that establishes an immense amount of heart to the characters and narrative. If anything, the one aspect of Here to Kill You that struggles to find its footing is the action. Compared to the last couple of films, this one doesn’t have quite the memorable action set pieces that the previously directed Tai Kato entry, Oryu’s Return, did. In fact, this film is often the inverse of the previous one. Where the sixth film struggled with narrative and character but soared in action, this one reverses its strengths and weaknesses. The action can still be great, with note to the opening reed battle and the final showdown between Oryu and the main villain, but it’s weaker compared to the rest of the film.

As this series starts to wrap up, it’s welcome to know that each film can be as overly strong as this one in its execution. Red Peony Gambler 7: Here to Kill You builds on its story with a finely tuned narrative and character combination, some great nuanced performances, and still deliver enough entertainment to be an easy to digest piece of cinema. There’s only one more film in the main run left, so stay tuned for the fascinating conclusion to Oryu’s journey.