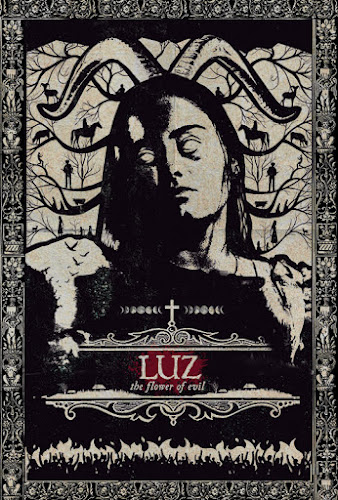 There is a dreamlike quality to Luz: The Flower of Evil that many films aspire to and never quite achieve. In the effortless fashion of a David Lynch or Jodorowsky, Luz creates a world with internal, consistent logic that is both horribly familiar and terrifyingly alien. Every frame of it looks like an oil painting, like a sort of perverse lost Norman Rockwell “Hidden Columbian Religious Cult” collection. It’s almost hard to even call Luz a horror movie in a modern sense of the term, as it owes more to something like the original Wicker Man or The Holy Mountain than anything even close to a slasher movie. It means that it evokes a different kind of horror, something existential.

El Señor (Osorio) is the leader of a small cult in the woods of Columbia. The land is poor and the people are suffering, but El Señor promises them that capital “G” God has spoken to him and told him that they will begin to see miracles. Chief of which concerns the barren tree next to which he buried his wife Luz, who was well-loved but died under unrevealed circumstances. He has three daughters, two adopted, who are regarded as angels. Chaste, perfect girls who exist to care for their coming Christ figure. His natural daughter, Laila (Esquival) is curious, a wanderer who likes to explore the “demon woods.” She comes across a device, which we know is a cassette player, an older type making this movie appear to take place in the 70s, that her father tells her is the devil. The devil takes many forms and exists to manipulate and fool good people. One night, the youngest daughter Zion hears a struggle outside, it’s El Señor and a woman struggling, with him screaming that this is the chosen child before assaulting her sexually and running her off the land. From then on, we have a blonde-haired, blue-eyed child chained in the middle of the village, proclaimed to be Jesus.

The cult takes Jesus to the creek that feeds their land to dunk him in, like a baptism, and purify the water. We do find out from some of the villagers that this is the sixth such child, and that maybe this child, too, is actually a demon or possibly even just a kidnapped child. This is one of the things about this movie that is so interesting. I am a lover of cult horror, and not in the Rocky Horror sense, of course, but in the Midsommar sense. I believe that there is something inherently fascinating about cultures that are foreign to me and, like the best examples of the genre, this uses the set up to question religion as a concept, its value, and our place in the world. It allows us to explore the extremes of human belief and what we can justify if we think there is a greater purpose. Luz is challenging in all of those ways, as it presents a belief system that’s within a step of something we do understand. It uses that to take a step beyond and express what happens when those around El Señor begin having doubts, even speaking in open dissent, and what El Señor is willing to do to maintain his power. Even as everything begins to fall apart around him, the possibility that Jesus is really a curse with his own daughter potentially falling to evil, Luz exists ultimately as a character study.

Horror character studies are a storied tradition in film, arguably most famously Henry: Portrait Of A Serial Killer, and Luz follows well in those footsteps. It’s filmed in the surreal, fantasy-like fashion I described earlier, so there’s no stylistic comparison, save for the documentary-like look at a specific figure. No judgment, little expectation towards a denouement, and not even enough grounding to say for sure what decade it’s supposed to be set it, gives it a timeless, ethereal quality. It’s like some sort of artistic therapy session, a cinematic Rorschach test if you will, and this movie and your reaction to it will ultimately tell you more about yourself and how you feel about the heavy, as I said occasionally existential, subject matter on display. It’s at the very least horribly captivating and entertaining, for desperate want of a better word, situationally.

There is almost no negative to pick out in the movie that can’t be easily attributed to either the micro-budget (as stunning as everything looks, there’s an occasional artificiality to it) or that lacking narrative grounding that helps you find your footing if you’re not someone who enjoys a film that operates on pure dream logic. That said, I do not need such grounding personally and I do unequivocally recommend this movie. Once it gets a full review via Dark Sky Films later this month, I believe it’s going to make some real waves. At the very least it certainly deserves to.