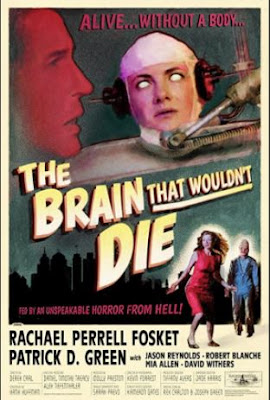 Remakes are a tricky business at the best of times. You have to respect the original material, and try to put a spin on it to justify retreading the territory. That second part is more vital than it may appear on the surface, and luckily we have Gus Van Sant’s Psycho as shorthand that spares further explanation. The genre of the fifties and sixties sci-fi horror has been a fertile ground for remakes with its combination of earnest (if over the top) acting, high concept (if silly) stories, and low budget cheesy special effects. The Brain That Wouldn’t Die was certainly ripe for a new take, and freshman director Derek Carl puts his passion for the original on display in a satire on the era that maintains the existential dread Inherent to the concept.

Bill Cortner (Patrick D. Green) is a brilliant surgeon obsessed with beating death, convinced that the ends justify the means. While on a drive to his lab, Bill and his fiancé Jan (Fosket, absolutely channeling original film actress Virginia Leath) are in a terrible car accident, and she’s decapitated. Seizing on his experimental knowledge, Bill manages to keep Jan’s head alive deciding that all he needs to do to fully save her is transplant her to a new body. Mutilated lab assistants, mutated failed experiments, psychic powers, models, detectives (the main one of whom is played by recently departed character actor Robert Blanche in a reasonably memorable final on screen performance), beauty pageants and brawling burlesque dancers all factor in to the “everything thrown at the wall” plot that manages to express its appreciation for the artistically laissez faire attitude of the genre and hold it all together resulting in an intentionally disjointed but ultimately satisfying story. 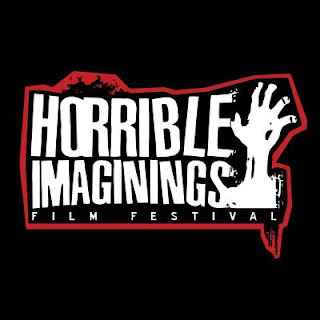 The effects work, though reasonably low budget, is all practical and looks really good, as does the whole film. Well shot, with a fair few intentionally awkward angles and transitions reminiscent of the era it’s evoking. The satire is where this movie is going to fall apart for some, as everything in this movie is heightened to a parodic extreme, especially the acting and blood. For myself personally, humor being subjective, the jokes were pretty hit and miss (though for what it’s worth, the gag about Bill’s experiment in college in a flashback definitely made me laugh), and I do believe it caused a few sequences to drag. For every one of those, there were also very earnest deliveries on monologues about Jan’s desire to pass on versus Bill’s unchecked ambition and the inherent cruelty of forcing someone to live as just a head in a pan. They work and land strongly.

The idea of being stripped of all agency and left, mostly alone, in a lab while the man claiming to do it for your own good is attempting to commit a grotesque murder to provide you a new body is really unsettling, and not the only unsettling idea at play. The levity of this take on the story does prevent one from getting overly depressed or locked into that concept, and Jan’s eventual burgeoning psychic abilities offset it a bit as well. Not to mention the breezy pace and generally fun tone make this an entertaining watch, even if you’re left wanting a bit more substance.

It’s hard to call The Brain That Wouldn’t Die an objectively good movie, and there is a little bit of cringe here and there, but none of that is the point. This movie is an overwhelming success in the sense that it’s a stone-cold blast, and is exactly the sort of thing that should be projected on the side of a house on Halloween, seen in a drive-in with half attention given to it. They took one of the ultimate classic cult b-mad-scientist-horror-movies and made a modern b-mad-scientist-horror-movie, destined to find cult status. If that sounds even mildly interesting to you, then this is a must see.

Written By Sean Caylor
Posted by DarkReif at 8:41 PM