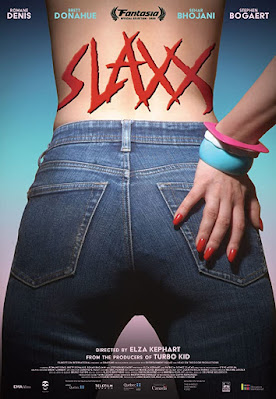 “Small price to pay for an awesome ass.”

Having worked as a retail manager for a decade or so, there was immediately an intriguing humorous element to the concept of Slaxx that caught my attention. If you have ever worked in the retail world, why wouldn’t you want to see a horror comedy that satirizes the overwhelming consumerist nature of modern society? I fuckin’ did. This is where Slaxx fits. It’s a low-budget Canadian horror comedy brimming with awkward humor, bursts of gore, and plenty of social commentary for those looking to consume a film of this nature. It’s sharp when it wants to be, charming throughout, and just strange enough in some of its choices to remain memorable beyond the credits.

It’s no secret to anyone that follows Blood Brothers that horror comedies are, to put it lightly, not my favorite. Satire, on the other hand, is one of the kinds of comedy that does perk my ears which is what initially drew me to Slaxx. Telling the story of a young woman, Libby, she is the new hire brought on board to complete a floor set for a big brand name clothing company. The problem is that their new line up of jeans just might be bloodthirsty living creatures out to devour the staff. Can the quirky people that work in the store survive the night?

What will attract the biggest number of watchers to Slaxx is the audacity of making a film with killer pants. It was only a year or two ago that fans were treated to In Fabric, a dark comedy and horror film about a killer shirt. While one might be tempted to compare the two, the films couldn’t be further apart in style and choice. Slaxx is pure tongue in cheek. Whether it’s the awkward way that characters interact, the ham-fisted manner that the store is portrayed, or the sheer outlandishness of seeing some puppet pairs of pants slurp up blood, snap necks, and chew off hands, Slaxx always keeps one foot firmly planted outside of the pant leg. While not all of the jokes land and its brisk run time prevents the film from digging further into the secondary characters to give them more depth and time to shine, there is just a fun vibe to the material that works in its benefit. Who knew Bollywood music would be so actively involved in a film about killer pants?

Almost immediately, beyond the horror comedy aspect of the film, Slaxx is aiming to send a message with its material as it opens on a young Indian woman picking cotton for the company that would eventually make the killer pants. Sure, that sentence is certainly two sides of the horror spectrum, but that’s the thing about Slaxx – director and co-writer Elza Kephart wants to make sure there is something to say along with the laughs, oohs, and ahhs. Oddly enough, this anti-consumerist critique of corporate capitalism and the wild tactics that it uses to sell itself to buyers and employees are low key the best part of the film. Perhaps it's my own general distrust of the system, having spent far too long inside of it, that I attached myself to the commentaries in the film, but even when the film gets a bit heavy-handed with its material it adds a fun thoughtfulness to what could have been a simpler film.

Like all horror comedies, how far the concept carries it will heavily depend on taste and cinematic preference, but Slaxx is a film that delivers on what it promises. There is a lofty sense of social goals to add to the gore and goofs which gives the film a bit of an edge. It allows Slaxx to navigate many of the pitfalls that come with genre-bending, its budgetary constraints, and how humor can hit or miss in a way that works. While rumor on the street has it that Slaxx will be receiving a digital streaming debut sometime next year, write it down. It’s not a film for everyone, but the hilarious mixture of satire, horror, and man-eating pants make it an effective curiosity that has to be seen to be believed.