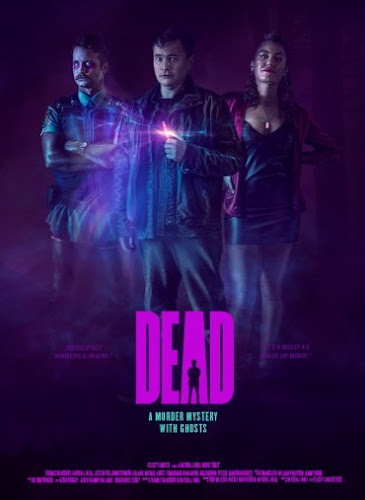 Horror and comedy work well together because of a similar sense of pace and revelation. A dependence on surprise. They, whoever “they” are, even say that laughter is actually a type of expression of fear, our minds reacting to unexpected stimulation. A common route is the inherent violence of slapstick or an extreme childish humor, an effort to offset what’s happening on screen. New Zealand horror comedy Dead goes a different way, with light, character-based and situational comedy. It’s a refreshing mood and an interesting take on the otherwise fairly well-tread territory.

Marbles (writer Tom Sainsbury) is a low energy stoner making ends meet as a spirit medium, helping people’s loved ones communicate any final messages and pass on. This is presented immediately and factually, as Marbles takes a mysterious injection that grants the ability, and the film admirably wastes no time on any kind of dull subplot doubting his power. After one such session, he finds himself stalked by the ghost of an uptight cop, Tagg (Director Hayden J Weal, Love And Time Travel) who demands Marbles solve his murder, the seventh in a serial murder spree. After Marbles’ mother indicates she’s selling the house he grew up in, a home with memories tied to his recently departed father, he decides to help Tagg in hopes of reward, enough to buy his home outright.

One of the initial strengths of this movie is its exposition. An opening montage sets up Marbles’ medium abilities, his goal and the danger of a ghost not passing on in a timely manner as they become more ghoul like. The make-up work on the dead, especially as they descend into this mindless state is subtle but extremely effective, as is the light filtering used to indicate when Marbles is high. The other strength is the jokes, which are more grounded to story. It’s not Evil Dead 2 with its geysers of blood and stooges inspired violence. Nor is it even like Kiwi country mate Deathgasm, with its… also geysers of blood. Horror comedies have more than the one schtick, but the blood geyser is certainly a mainstay. Instead, Dead employs gags like Marbles’ moped running out of gas immediately because he forgot to fill it then leaving it behind keys and all, deciding it’s a safe neighborhood since a cop lived there. The dead cop he’s talking to at the time, mind you.

And interactions like that are what make the more upbeat aspects of the movie work. Everyone is likable and reasonably believable. Tagg is uptight, uncomfortable with emotion and interpersonal communication, while Marbles isn’t a typical “Cheech and Chong” type stoner, instead being presented and entirely functional, if a bit dim. We eventually meet Tagg’s sister and a few others that round out a believable group of characters. Nobody has sitcom dialogue or really any jokes, again keeping the laughs grounded in the awkward and bizarre situation. Not to be outshined, the horror of this movie is actually pretty insidious. There’s nothing jumping at the screen and the ghoul makeup, although good and clear, isn’t especially scary. There isn’t even a musical spike in the movie. What ends up being so interesting here is that the killer and their motive are intensely believable and we take a fair few twists and turns to get there. There are never enough clues to call it a proper murder mystery, but everything does come together in a satisfying way. Not to mention when Dead’s mood shifts to this darker place, there isn’t a joke in sight to break the mood or tension.

Nothing in Dead is especially new, but it does take this familiar trail with an acrobatic deftness that doesn’t make it feel fresh, but does make for a smooth, comfortable journey. There is value in simplicity executed well, and this film is a fine example of that credo.