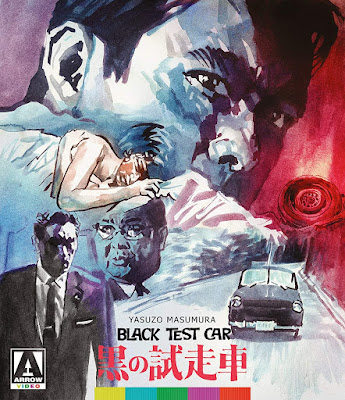 There are quite a few directors that I’ve always wanted to dig into, but between lack of availability to their films, money, and time, I have yet to really work my way through their filmography. Yasuzo Masumura is absolutely one of those directors. A wild and very diversified filmography makes him a fascinating artist, but most of his material has yet to receive proper releases. Perhaps that will end soon. With a slick duel release of his films, Black Test Car and The Black Report, Arrow Video is making a claim to continue their daunting task of hunting down the great and often forgotten cuts of cult Japanese cinema. Both films come in the same package with the Arrow Blu Ray, so for the sake of consistency with the release, both films will be discussed here as the fantastic double feature it is. They also represent two films in the Daiei ‘Black series’ and perhaps there is hope that Arrow has the rights to the rest of the 11 films in that series. Nonetheless, let’s discuss the two films from this latest release. 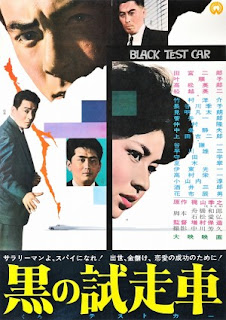 With the wave of ‘new action’ films that were being unleashed in the 60s from the various Japanese studios, one might expect the Daiei released Black Test Car to follow suit with its tale of corporate conspiracy to some degree. However, Black Test Car fits perfectly into the ‘Black series’ of old school espionage, corruption, and murder mystery that the studio was pumping out at this time period. Telling the story of two rival car manufacturers, Black Test Car is all about the corporate decay of moral ambiguity and shadowy decisions when two groups attempt to steal the ideas of the other company since they are both releasing similar sports cars on the market at the same time.

Doused in gorgeous noir visuals and seething with a sense in impending dread about the repercussions of failing to win the proverbial car race, Black Test Car is low key one of those brilliant thrillers that takes a very basic premise and imbues it in such a way that it’s impossible to ignore once it’s on. Ultimately, the car of the title is not the focus of the film, but it’s the strange depths that it’s slew of characters are willing to sacrifice themselves to that makes it a riveting watch. The manner that it’s main protagonist, hardly the “hero” of the story and played with a conflicted and occasionally sinister spirt by Jiro Tamiya, is willing to undercut his romantic relationship for the sake of his task, along with the espionage inspired tactics of his team, makes for a much darker film than expected. Director Yasuzo Masumura uses subtle visual keys, particularly in its rich and vibrant black and white cinematography, blocking, and tight camera angles, to layer into a script that could have easily fallen into more exploitative B-film territory. In fact, it’s easy to see why Arrow wanted to double up two features by this director for this release as he single handedly elevates the product far beyond it’s plot. Black Test Car is an enigmatic flick, punctuated with incredible execution of its concept and its final moments will leave one feeling a bit hollow about the sheer absurdity and dark intentions of the corporate and capitalistic world. 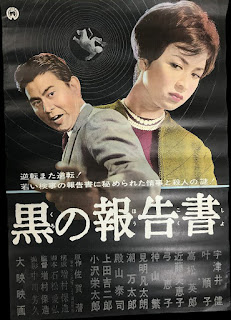 For the second film in this double feature, Arrow has smartly paired Black Test Car with a film from the next year of director Masumura’s career, The Black Report. While the director, like most of his peers in this time period, was a hired gun from the various studios, his style between the two films makes them feel like sister films, meant to be paired together in a variety of ways. Making it something of a perfect film in this double feature. The big difference between the two though is that The Black Report is a film that takes a similar nihilistic bent and applies it to more standard noir-ish murder mystery instead of a corporate espionage plot.

Once again gorgeously shot in black and white, as if it needed to hammer home its shady contrasting elements anymore in a visual manner more than it already does, The Black Report follows an up-and-coming lawyer as he is thrown a new murder case. A questionable gentleman and plenty of underhanded individuals who may or may not be involved in his violent demise jumps to the top of his massive pile of work. The film, opening up at the almost serene crime scene before the flurry of police and lawyers start investigating, is less about the reveal of the murderer than one would expect. Instead, Masumura approaches the story and narrative in a way to focus on the investigation. An ‘about the journey, not the destination’ kind of approach to its tale. The politics between law and business, how money factors into everything and the fickle nature of humanity all become obstacles to the protagonist, Kido. Naturally, like the other film in this set, the corruption of the system and the hollowness of its lofty ideals rear their head as themes and tonal choices which makes the rather standard procedural aspects of its script feel far more artistic and effective than expected. Partner that with plenty of nuanced performances and that overarching sense tension that the director cakes into the tight camera work and stylish visuals make The Black Report a gem of classic Japanese studio cinema.

While the Blu Ray release doesn’t feature a ton of features, outside of a fantastic analysis of the director in a slick visual essay and a fantastic written piece in the booklet, the fact that these films even have a beautiful high definition release in the US is reason enough to celebrate. The quality of the two films is easily reason enough to add this set to your collection and it brings a lot of hope that perhaps Arrow Video has picked up more films from this often-overlooked director.