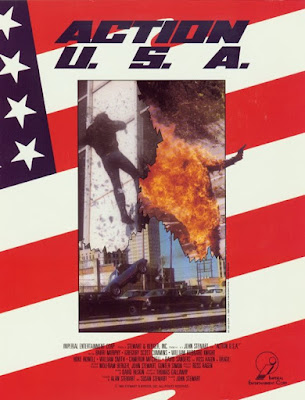 Although I have yet to actually attend a Fantastic Fest in person, I will admit that being able to see some of the films from this iconic film festival from the comfort of my home has been kind of nice. Don’t misunderstand that statement, I am a huge theatrical release supporter and once we get to a point in the pandemic that I feel it is safe for myself and others to go back to festivals I will be there in a heartbeat, but for the time being the ‘virtual festival’ is kind of convenient in regards to seeing the movies. Being able to partake in my first ‘Secret Screening’ at Fantastic Fest 2020 is still fun and the fact that they chose to showcase a new 4K restoration of the relatively unheard and lost action film, Action U.S.A., only deserves a round of applause. While the film will certainly play gangbusters with a crowd, even with a movie audience of 1 (and a couple of choice adult beverages) Action U.S.A. is a damn riot.

Coming right at the end of the 80s boom of stunt-filled action cinema, Action U.S.A. plays like a greatest hits collection of sheer stunt audacity. I would be lying to say that I’ve heard of director and co-writer John Stewart, but throughout the entire runtime of the film, I couldn’t help but think to myself that I don’t understand why he never found his cult following like fellow stunt director legend Brian Trenchard-Smith. Simply because if you’re a fan of the latter – you will be a fan of the former. (Side note: This screening included a very informative and fun Q & A where, you guessed it, BTS interviewed Stewart, so put that in your back pocket for later.) There is a sense of ‘can do’ attitude in every sequence of this film. Whether it’s in the breakneck cat n’ mouse pacing of its plot and narrative or the sheer amount of car wrecks, ‘splosions, and men flying through the air into and through various objects, Action U.S.A. intends to deliver enough thrills and spills to satiate any 80s action cinema fan.

When it comes to the overall quality of the film, one might be overzealous to call it ‘a great film.’ Quite frankly, it doesn’t need to be. As mentioned before, it often reflects the idea of being the greatest hits compilation of the entirety of 80s action. Action U.S.A. kicks off with a bang, introducing the audience to a young couple speeding around in a fast car before heading home to make love. Don’t worry. The romance is thin and often relegated to being a small subplot. Within minutes, two thugs kick in the door and the chase is on. Fifteen minutes in and we have a massive helicopter sequence with a man dangling outside of it. Stewart and company have no real interest in pumping the brakes too much with the film, the character development comes mostly at the moment and the pauses between action sequences are to make sure the film is setting up the next set-piece and hitting all of the usual tropes of the genre. In this manner, yes, the script feels a bit thin with much of the characters and plot feel thinly threaded in-between the action, but the film is hitting the tropes so hard and with so much attitude that it still entertains. Which is, in the film’s defense, exactly the reason why someone would be watching a movie called Action U.S.A.

Once the film has stepped on the gas, it never lets up. The chase structure of its plot, which later introduces two FBI agents, possible moles, missing diamonds, organized crime, and a hitman named Drago who drops lines like “They don’t make bullets big enough,” in reference to why he isn’t dead, makes for a breakneck pace. It’s all in the benefit of its audience. The dialogue is silly, the secondary characters are haphazard caricatures, and there is often a sense of tongue-in-cheek that can rub a viewer the wrong way if they are in the wrong mindset. These are also the reason why this film entertains to no end. This film is blissfully 80s and action-packed. You either buy into the fact that the protagonists stop conveniently at a bar in Texas to start a barfight to give the heroine, Carmen, a chase to sing a country song on stage or you don’t. If you do, slam that cash on the table right now.

The new 4K restoration looks very impressive, although I do not have the experience of seeing this film in the VHS era to compare it to as a standard. For action fans all over, do yourself a favor and give Action U.S.A. a shot. It’s a film that wears its influences on its sleeves, delivers on all of the ridiculous action set pieces you could want, and never takes itself seriously enough to stop having fun in every minute of its run time. From my understanding, the film will be available to rent over at the Alamo Drafthouse On Demand service for a short time following this screening. I cannot recommend this film enough for those interested after reading this review.