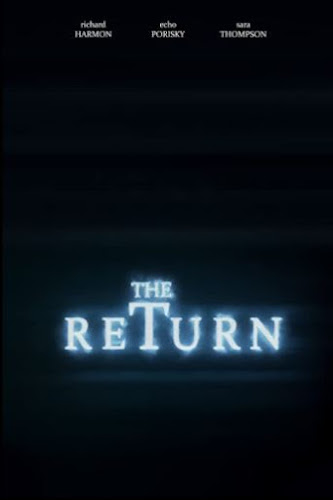 Haunted house movies are one of the, if not the, oldest and most venerated sub-genres in the entirety of horror. From The Amityville Horror to Poltergeist, House On Haunted Hill to Paranormal Activity and everywhere in between. The hardest part of one of these movies at this point is doing anything even remotely interesting with them. The trouble with being the original effects genre is that you literally have to reinvent the wheel over and over again in order for it to be effective. Or, more simply, when you see someone looking in a bathroom mirror, you know the next beat is going to be some horrid specter staring out of the mirror as soon as the room vacates. Some of these scares are so completely ubiquitous you can see some variation at the haunted house your neighbor down the block throws together every year. It’s the reason The Return comes as such a pleasant surprise. It feels like a legitimately fresh take and marks an exceptionally auspicious feature film debut for Canadian director BJ Verot.

Rodger (Richard Harmon from tv’s The 100) is a genius college student road tripping with his childhood best friend Jordan and girlfriend Beth (Porisky and Thompson, appropriately) back home after the tragic death of his father. Almost as soon as they arrive strange things begin happening and it’s a murderer’s row of the classics. Doors close seemingly on their own, shadows appear and move on their own, ephemeral ghost hands grab shoulders. There are a lot of the classic scares, albeit very well executed. This is an extremely good-looking movie all the way around with really good effects. And not just for the budget, the actual look of the ghost is really memorable and stunning, a black misty figure with sharp striking eyes, who’s also occasionally a fleshy skinless horror. While cleaning the house, Jordan finds medical records indicating therapy sessions Rodger doesn’t recall in his teens and he tracks down the doctor (genre actress Marina Stephenson) to question her about them, eventually learning of an imaginary friend he and his tragically deceased sister shared. Realizing the timeline of his imaginary friend and the therapy sessions line up with a lot his personal tragedies, including the aforementioned sister and his mother’s mysterious disappearance, Rodger and his companions realize that the threat in the house is all too real and begin to search for a way to stop it.

All of that, combined with some overlong scenes, and some lack of script efficiency led me to believe I was watching an otherwise solid but run of the mill ghost movie. Ultimately, it feels like this was the intent because that’s almost precisely when the movie pulls the rug out from underneath you and becomes this entirely other beast. The nature of the entity and Rodger’s connection to it felt like a gut punch and I spent the rest of the movie trying to collect my jaw off of the ground long enough to wrap my head around what was happening. I don’t want to say it was a twist, as it’s not an M. Night “shoulda seen it coming” affair, and it’s really not the point. This isn’t a mystery where you’re seeking the answer in that way narratively and it doesn’t especially need to be. It does, however, change the weight and overall scope of the story in a way that is extremely refreshing and feels very new and modern by the end of it.

I truly came out of The Return satisfied in a way I’m usually not by haunting films. Although I don’t want to oversell it. A clever note and very strong third act don’t completely cover some of the script problems and even the fresh context of said ending doesn’t completely excuse some well-trodden territory, but for me it was like walking a familiar trail and taking a sudden left into undiscovered ruins. The rough parts are still rough but the experience overall is memorable and exciting. This film has an energy and narrative that is fun and breezy while also being intense when it needs to be. It takes a familiar set up and does something unfamiliar and clever with it. This definitely feels like a movie made with focus and a strong vision, and likely the beginning of an extremely memorable career for its filmmakers.