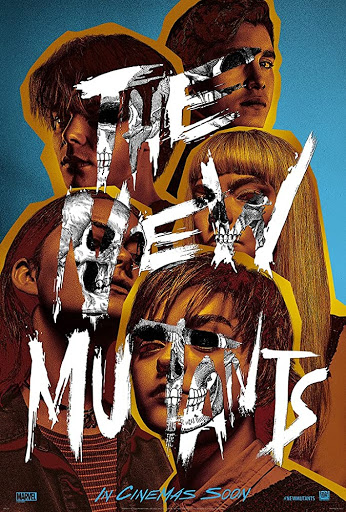 The New Mutants is one of those movies that people thought was cursed. Not in the sense of Poltergeist, but in the “finished but maybe never released” sense. The House Of 1000 Corpses, John Dies At The End, Roger Forman’s Fantastic Four kind of way. Two of those three came out eventually, and as of this week, it’s three out of four. A troubled production, reshoots far after principal photography, and the Disney buyout of Fox were all major factors at play here. None of this has any particular ultimate bearing on the quality of the movie. But any reviewer would be remiss not to mention it. That combined with the roller coaster flying off the rails feeling that is the year 2020 makes this movie a wild release. A theatrical only release when some major markets still aren’t allowing open theaters? (Full disclosure, I live in one such market, and saw this film at a drive-in). But how does it stack up as an adaptation of a beloved series, and more simply as a movie?

Firstly, let's talk about the source. Created by legendary X-Men scribe Chris Claremont and artist Bob McLeod (miscredited in the film as Bob Macleod. Ouch) The New Mutants was the first spinoff spawned by the blockbuster early 80s revival of The Uncanny X-Men comic following an exceptionally long hiatus. The original series dealt with a new team of teen X-Men in training, now that the original team and further recruits were definitely supposed to be characters in their thirties (or older, I’m looking at you Wolverine). Most of the characters in the movie were on the original team, only Magick a more popular character (and in the comics Colossus’ sister and technically non-mutant) replacing long-forgotten original member Karma. This is all backstory, since all they really took from the original books are names and powers.

So, what we have on-screen here, all preamble aside, is an amalgam of other influences using The New Mutants comic as a sort of glue to attempt to hold it all together with mixed to negative results. It takes shape thusly: Dani Moonstar (Big screen freshman, Blu Hunt) is the sole survivor of a spontaneous and devastating tornado that tears through the Cherokee reservation that her father and the rest of her family lived in. She wakes in a mysterious hospital learning about the tragedy and that she tested positive as a mutant in one fell swoop. Doctor Reyes (the always excellent Alice Braga) tells Dani that they isolate young mutants who have freshly manifested powers and work with them in how to control their newfound abilities. Also in the hospital are Rahne a young Irish woman who’s basically a werewolf, Sam a good ol’ Kentucky boy and human cannonball, aloof but fiery Brazilian rich boy Roberto, and magical mean girl Illyana. Instead of using the established looks and personalities of these characters, they’re given the classic 80s Breakfast Club teen archetypes which work for the shift to horror well enough but doesn’t serve the adaptation. It will likely upset the small but loyal fanbase these characters have. I will say that the manifestation of mutant powers has been shown to be traumatic and often violent and using this as a common denominator and metaphor for mental health and more specifically traumatic guilty memories is a stunningly clever play in an otherwise by the numbers film. The horror element comes fully into fruition in the form of hauntings tied to these events. The kids are being haunted by specters of their past. Sam sees visions of his father and coal mine he died in, Rahne envisions the priest who declared her a witch, etc. Now they have to survive and figure out why their pasts are coming back to literally haunt them.

So with that, we have the license, the mechanics, and the plot, but how does it fit together? Better than one would think but like a puzzle depicting raw sewage, fitting well doesn’t always make a pretty picture. None of the horror is especially scary, and the effects work is iffy. The themes and design of the sequences are clever and, unlike most superhero films, this isn’t heavy on action or power usage. The powers are only directly dealt with in the framing of the film around Dani discovering her powers, although the kids trying to survive the hospital (and perhaps get moved up to the big leagues, the prize that Dr. Reyes waves in front of them) becomes the point. By and large, this movie is passable, and the performances are equally passable, but there is also the distinct feeling that this would’ve been better as a television pilot or perhaps it would’ve been slightly more effective if it had come out when originally intended. It was possible to sub-franchise as a late script reveal links this movie to the previous Fox “X Universe” in an interesting but entirely pointless way, and with that, the film as a whole feels like the first act of something… well, something better and if not better than at least more complete. Then there is the human trafficking subplot that is borderline brushed aside which may be for the best, as it is a plot point this film is not equipped to handle. Similarly, a subplot about burgeoning sexuality, and a few others that feel like half-thoughts are undercooked, underwhelming and actively weaken the experience as you’re left more feeling confused by the sudden character turns and revelations. Plus, some of these things are weighty enough that it feels inappropriate to pay only lip service as a means to wave away otherwise unacceptable character behavior.

It definitely shows that this film was heavily inspired by Nightmare On Elm Street 3: The Dream Warriors, and supernatural haunting at a mental asylum where the haunted have powers is a good idea. It worked great in The Dream Warriors. It’s unfortunately barely passable here. It’s difficult to really recommend The New Mutants as anything more than a curiosity at this point, a remix of a few better movies with a beloved comic property sprinkled in for spice. It’s hard to figure out who it was for. As both a comic book (although admittedly not this one) and horror fan, it feels like this was being served just for me and I’m left starving. It’s honestly worth waiting for this to be streaming somewhere, and will likely go down only as a strange capper to an occasionally illustrious and long-running franchise. But it’s a better bow than Dark Phoenix, at least.

Written By Sean Caylor
Posted by DarkReif at 8:50 PM