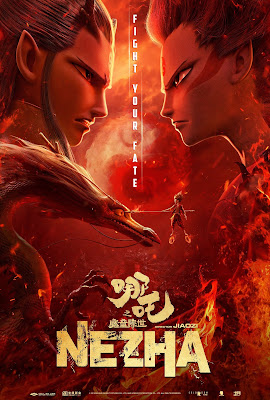 One of the more fascinating pieces about the rise of the Chinese film industry over the last five to ten years is how incredibly unpredictable the entire thing is as a whole. Films that would seem to check off all of the boxes to soar in the box office flounder and yet other films come out as massive surprises. Of the latter category, Ne Zha might be one of the most astounding. China has been slowly putting together an animation film plan over the last few years to build an audience there and recent foreign box office successes like Disney’s Coco and a re-release of Spirited Away have laid the groundwork for a domestic giant to arise. As it turns out, that film is Ne Zha. Ne Zha took China by storm, generating astronomical box office numbers and becoming something of a legend seemingly overnight, enough so that international distribution label Well Go USA took notice and quickly generated a theatrical release for the film in the US. A surprising move since, well, it’s a foreign language animated family film. Still, now that the film his been unleashed on the unsuspecting US market, it’s safe to say that, yes, Ne Zha is a blast. The animation is fun and tight, balancing traditional cartoon choices with lush CGI detailing, and the story and narrative find a strong balance between the family-friendly moments and key fantasy action set pieces. This landmark animated film takes the best of the blockbuster formulas that China has learned from Hollywood and given it a delightful and distinctly Chinese spin. The results are a rip-roaring ride of laughs, action, and bigger than life fantasy morals.

Ne Zha focuses on a heavenly fantasy concept where some deities are tasked with a prophecy that concerns a crystal which is split into two parts: the spirit pill (good) and the demon pill (evil.) When a conspiracy unfolds that has the spirit pill stolen and given to the imprisoned dragons, the demon pill is the one that ends up as part of the newborn son of a just and kind couple who protect the local village. They refuse to give up on their son, Ne Zha, and fight the prophecy that tells of the monster be will become. They set off to train him and give him the love and talents to fight his fate, even if a larger conspiracy lurks to make sure he fulfills his destiny.

There is an immense amount of plot of Ne Zha. Like most fantasy focused films, the first 20 minutes or so are spent laying the groundwork just to get the audience settled into the world that the rest of the story is going to occupy. From there, the film rarely rests on its hands. It swings back and forth between non-exposition sequences and full-on exposition spewing moments. If there is one thing that tends to slow down the film, it’s the fact that it spends so much time painting the backdrops and laying the groundwork for the second half of the film. It’s not necessarily a terrible idea since the character is a relatively famous name in Chinese folklore and the story being told is a relatively large departure from the various outlines that I’ve heard previously. As a westerner though, it’s still a lot to consume and if a viewer wants to enjoy what Ne Zha has to offer, it’s best to accept it and just run with it.

When considering how much that Ne Zha leans on Chinese fantasy concepts, it’s relatively impressive that director Jiao Zi could blend it so seamlessly with the consumable nature of the international blockbuster. However, it’s not like this hasn’t been accomplished before. Although an earlier science fiction film from the year did something remarkably similar in tonal balance, the wildly entertaining if not flawed The Wandering Earth, Ne Zha owes a bit more the likes of Stephen Chow and Tsui Hark in its inspirations than anything. There is a sense of balance to its tones and approaches to its more family-friendly concept. There is plenty of slapstick humor and easy to understand emotional beats for kids, including an action sequence that ultimately results in one character’s ability to fart on command to win, and yet there is enough adult material in its themes of fate, choice, sacrifice, and parental obligations to carry in some great depth to the characters. It’s a bold choice to make the titular child character a villain who is fighting against his darker tendencies to be the hero no one believes he is and, truthfully, it’s what makes the film feel so fresh compared to its peers. Sure, Ne Zha is a relatively annoying character and some of the more generic jokes and child appeasing moments can feel silly, but the film weirdly succeeds in generating the heart and soul it needs to sell the world.

The biggest reason to see Ne Zha though is the impressively executed fantasy action set pieces. The film smartly builds up its action as it goes, often relying on comedic moments buried in the action to break up the pseudo-violence onscreen including a key sequence where Ne Zha hunts down a water demon in the second act before meeting his “good” counterpart, the result of the dragons crafting their own hero from the spirit pill. The visuals throughout the film are relatively striking, using diverse settings and fun character designs to strong effect. By the time the film reaches its third act, it’s a full-blown visual and action extravaganza. Fire, ice, water, storms, and a fantastic four-way brawl down a waterfall power up the spectacle and it delivers in spades. Be prepared, it gets wild and it’s all the better for it.

Although Ne Zha is a foreign film that does not hesitate to embrace its Chinese folk tale source material, this is a film that fully deserves the theatrical distribution it’s receiving even if a western audience may have trouble swallowing it. It deserves the big-screen attention for its full-on visuals, impressive action set pieces, and larger than life narrative. It is not necessarily an easy film to consume for those unfamiliar with the style of Chinese blockbuster fantasy cinema and some of the family friendly elements seem simplistic compared to the world-building and visual style, but Ne Zha is a supremely entertaining blend of the animated big budget film mixed with the traditional action fantasy storytelling. See it, see it in theaters if you can because Ne Zha is a trendsetter for the future of international cinema.

Who else is ready for Ne Zha 2? I sure as hell am. Keep fighting fate!