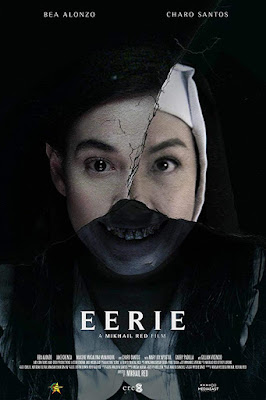 Initial trailers made me relatively excited for Eerie, the Filipino horror film that was recently picked up and released via Netflix in the US, but then the weird publications started to get a hold of it. Headlines that claimed it was too scary for regular audiences and how people had to sleep with the lights on started to make their way across social media and it immediately turned me off of it. Not that those kinds of claims indicate a film is good or bad – another Netflix release, Veronica, was a film I quite enjoyed that received the same treatment, but clickbait articles like those sour me a little. Having a bit of free time to review a few films for the year that I had not seen was the main reason I decided to partake in Eerie after some of that overzealous hype had worn down. Although there are certainly some creepy set pieces to be enjoyed in the film, the overly predictable nature of the plot and its adherence to so many tropes of the ‘ghostly girl’ sub-genre make it a rather mixed effort. For every interesting piece of execution, it follows it up with a mediocre one. For young horror fans, more casual film watchers, or those simply not versed in the sect of Asian ghost stories, Eerie might be appealing. For the rest of us, it’s a rather hum-drum addition to the genre.

Eerie tells the story of a student counselor, Pat Consolacion (played by Bea Alonzo in a performance that essentially carries the entire film on her shoulders emotionally,) who works at a large Catholic Academy for girls. Rumors have spread since one girl hung herself in the third story washroom and Consolacion has started to suspect that it might not be suicide. Fortunately, she has the unexplained ability to see the ghost of the young woman at night and starts to question her about the incident in hopes of uncovering what really happened. When another student dies on the campus, Consolacion suspects that there might be a larger conspiracy on hand.

Eerie’s plot and narrative play out in the most basic of ways. At this point in my life, I’ve seen a few dozen films that follow all of the same beats. The mysterious murder. The emotionally charged central character who attempts to solve the case. A possible conspiracy to hide a killing. The ability to see the dead girl and question her. So on and so forth. Even with the film tries to take a few new angles with things, including a rather interesting slant of religious layering or a third act that kicks fully into horror territory, it’s not enough to truly set itself aside from its peers. Most of the emotional messaging falls flat, despite some great efforts from Alonzo to carry that portion of the film, and there is only one key sequence in the last five minutes or so that really lifts the film up in terms of emotional weight to its paint-by-ghostly-numbers plot. The film ends up being more of a crime drama with a supernatural twist than a true horror film which makes it even less interesting as it unfolds.

With a thin and uninspired foundation, there is some solid executions to Eerie that do kick it into being a middle of the road film instead of a lesser horror experience. Director Mikhail Red, who earned a ton of credit for his sophomore effort Birdshot and is currently finishing up his follow up zombie film Block Z, ably slathers the film in some impressive atmosphere. The opening sequence is a classic ghost scare set up and, weirdly enough, it works. Throughout Eerie, there are some solid set pieces that make use of the setting and concept. Again, he nails the third act in a few key ways and there are a handful of great sequences that start to develop a solid sense of dread. However, the balance of supernatural tones and the crime mystery at play never even out.

All in all, there is nothing offensively bad about Eerie as a film. It has some solid sequences, a great atmosphere, and the lead performance by Alonzo carries the film. Unfortunately, it lacks a sense of urgency to its pacing and its formulaic plot and narrative undercut any of the effective execution. It’s not a bad way to burn an hour and a half for more casual horror fans, but in terms of the sub-genre, it tends to fall flat.