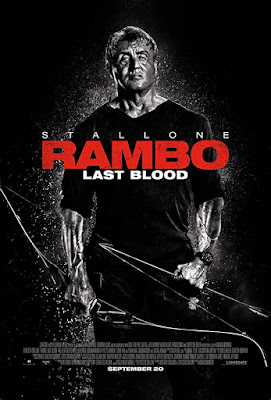 Author’s Note: It’s hard to discuss anything to do with the Rambo franchise without observing the politics therein. They are all inherently political movies and I think the best of the franchise has something real to say. Now, I don’t think Rambo: Last Blood is so much actively making a statement as it is using some of the horrors of human trafficking and Mexican crime cartels as a generic “boogeyman” and as motivator, but in the reality we’re existing in now, it’s also not unfair to say that using these real-world horrors as dressing in your film means that it needs to be handled with a tact and grace that Last Blood doesn’t manage. This film has both cartoonish, Eli Roth movie-like gore effects and brutally realistic sexual violence/torture, and the incongruity of that is a problem, even if the politics themselves weren’t. I am going to review the movie as it is and not make any more specific political proclamations, and furthermore, I’m going to review this movie on its narrative and intent alone. The above is worth mentioning because, for some people, this movie will be difficult if not impossible to sit through and it bears mentioning up top.

Just about a decade after John Rambo killed a statistically significant percentage of Myanmar and finally came home to his father’s ranch in Arizona, we discover that civilian life has seemingly worked out for him. We see him breaking horses and digging tunnels. We’re also shown that John still suffers PTSD, but has sought help as he’s medicated for it. Upfront, this is not going to be a glowing review, and there are a lot of critiques this movie deserves, but the medication thing is worth calling out as mental health stigma is a huge issue especially among veterans and I actually do appreciate the normalization of necessary medication for THE premiere American war veteran action character… but I digress. We also find out that Rambo had helped raise family friend Maria Beltran’s granddaughter, Gabrielle. One day, before she heads off to college, she asks John if he’ll help her go to Mexico to confront her father Miguel so she can ask why he abandoned her and her mother. John tells her that her father was a bad person and that she should live some more life before asking these kinds of questions. Gabrielle then asks her grandmother, and she, her grandmother, and John have the same conversation again. Gabrielle then goes to Mexico by herself anyway and meets up with her old friend, who Gabrielle’s grandmother implied was a troublemaker earlier. They go to confront the father. It doesn’t go well, and he shoos Gabrielle away. Her friend suggests going to a club to clear their heads and sets Gabrielle up to be kidnapped by an especially brutal cartel of human traffickers.

We’re going to take a brief break to talk about this part of the plot set up, as we’re already at least two plot crushing details deep already. For one? Everything about the set up requires accepting some contrivances that are not justified, not the least of which being Gabrielle’s choices in this movie. She doesn’t just make naïve mistakes, she fully acts like a petulant tween at best and there is very little logic to her actions which is quite a juxtaposition compared to how intelligent and capable the movie until is trying to convince us that she is. There is also the fact that nothing about John feels anything like the Rambo we’ve gotten to know for almost forty years now. The fact that there is nothing that is character-defining presented on screen at any point is frustrating at best. No mention of Troutman and no mention of Thailand. Not to mention the urban setting with the gangland villains where no effort is made to even thematically or metaphorically tie-in to his experience in Vietnam.

Rambo discovers Gabrielle is missing and goes to Mexico to find her trail. He finds and questions Gabrielle’s father and friend, eventually ending up at the same club and questioning Gabrielle’s kidnapper. Even in the midst of this fairly trite portion of the movie, there is some impressive violence and more impressive practical gore effects. That is to say, he questions the kidnapper hard and does discover when Gabrielle is being held. But he’s also spotted by watchers and confronted by about twenty people and the two cartel leaders, Hugo and Victor. Finding Gabrielle’s photo in John’s wallet, Hugo tells Rambo that her life is now going to be short and torturous, and it’s all his fault. Also, John is going to have to live with that knowledge… and despite Victor’s misgivings, they walk away from a beaten unconscious Rambo. He’s saved by a journalist (Paz Vega) and after recovering (during a montage of Gabrielle’s torture, including having heroin forced on her), Rambo tries another rescue. From this point, it becomes more recognizable as an action movie, though the damage to the film’s mood and feel is done.

Gabrielle’s entire existence and her tribulations exist only as motivation and justification for Rambo to be as brutal as he wants to be to her attackers. Not even speaking to the cultural issues, that’s just lazy writing and worse, it’s lazy shock writing. The whole trafficking subplot doesn’t even match the themes of the movie. Well, except the stated idea that the whole world is terrible, which is a poor excuse to get into celebratory violence. Or to put it more plainly, this is a big, dumb, gory action movie with the plot of a self-serious revenge drama and it never marries or juggles these elements especially well. As implied earlier, there are no ties to the greater themes of the series, such as they are. This is a series that started as a meditation on our treatment of veterans. The plots still have logical theming following mistreatment of soldiers; Covering up POWs remaining in Vietnam well into the eighties. Helping the Taliban drive Russia out of Afghanistan and rescuing his captured Colonial.

Then the fourth Rambo mixed things up by having him still living peacefully in Thailand and rescuing Christian missionaries from a brutal military dictatorship which is functionally different, but still prisoners in a war. That’s who the character of John Rambo is. Last Blood’s depiction of the character is basically a vigilante. This is a revenge film, plain and simple. An ugly, exploitative one at that. You could have told me this started as an unshot Charles Bronson Death Wish sequel and I would absolutely believe you. There is also a huge disconnect when the cartel bosses let Rambo live. It’s a complete snapping of the suspension of disbelief. The fact that this movie tries so hard to justify it is almost admirable, though. Almost.

There isn’t much else good to say about this movie really. The acting is fine all around, though no two actors can seem to agree on what kind of movie they’re in. The effects are amazing, and there is gore and viscera a plenty for the few minutes of action that exists in this movie.
There is no reason to see this movie. Wait until some enterprising YouTuber sets all of the kills in this movie to, presumably, the Home Alone soundtrack to see the worthwhile parts of Rambo: Last Blood, and spare yourself everything else.