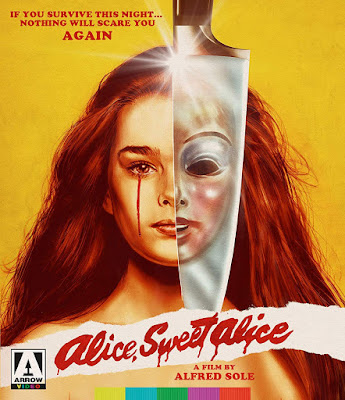 The first time that Alice, Sweet Alice came into my awareness was probably a decade or so ago when a painting of the masked villain of the film popped up on my social media feed. The painting itself was fantastic, a modern exaggeration of the characteristics with bold yellows, reds, and blues. If I could remember the artist, they deserve some credit and I spent a good deal of time trying to find that picture again to very little luck. The message was clear though, I needed to see the film. At the time, there was only a shoddy version of the film available via Amazon Prime streaming and this is where I first experienced it. Too often Alice, Sweet Alice gets thrown into the lot of “forgotten slashers” on a variety of internet lists and, despite its fair share of cult cinephiles that champion the film, it tends to be despairingly overlooked. It doesn’t deserve to be. Alice, Sweet Alice is one of the true diamonds to be found in the genre. It toys with the expectations of the viewer, delivers on its off-beat quirks, and still manages to layer in a lot of thoughtful material both in the visuals and narrative to give the film punch on multiple watches. On top of all of that, this latest (and greatest) Arrow Video Blu Ray release lives up the strength of the film itself.

Coming out in 1976, Alice, Sweet Alice is one of those films that often falls into being considered an American style giallo film or, as odd as it might seem, a sub-genre that is called a ‘proto-slasher.’ For simplicity’s sake, I tend to just refer to it as a slasher, but there is a reason for that. Although the slasher formula wouldn’t be truly broken down for a mainstream audience until the release of Halloween a couple years later, Alice, Sweet Alice hits a lot of the same style, tone, and narrative points that are inherent to the slasher genre. There’s a killer with a gimmicky look, a yellow rain slicker and a creepy mask with heavy cartoonish woman’s make up coloring, and that villain proceeds to slash their way through the people around an apartment complex and church community. Kitchen knives, a high body count, and a relatively quick pace keep things easy to consume on the surface for fans looking for an entertaining film.

However, the film plays things loose with the expectations of its audience. The giallo comparisons, at this point, are far more interesting though, simply because the film loves to toy with its viewers on the identity of the killer and layers in some often-dreamlike logic to the film. The film slathers on a religious overtone, particularly with the setting of a church community, multiple key sequences that occur within a church and during church services, and how the themes weave into the plot. This gives the film a depth and balance to its quirkier moments that allow an audience to invest in the characters, but not question some of the more ridiculous plot elements like the strange landlord and his weird attraction to little girls or some of the detailing with how the film maneuvers from point A to point B. What ultimately works in the film’s favor though is that it continually surprises with the directions it slides and if you think you know which character is driving this narrative, guess again because this film plays it very loosely there too – all to its benefit.

Once again, Arrow Video brings out the big guns for the release and stocks the new Blu Ray to the brim with fantastic features. Obviously, the main highlight of the film is the new 2K restoration, which is a massive leap up from the version I originally watched a few years ago, but the new audio commentary, interviews, an alternate TV cut of the film, and the usual trailers and such make this version a must-own for horror fans and those who collect great releases of cult cinema. It’s not like Arrow Video had to do much to improve on the versions of the film that were out there, but this latest release doesn’t hold back from giving fans what they want in terms of the features and new 2K restoration.

For a film that has been overlooked for so long, it cannot be understated enough in how fresh feeling Alice, Sweet Alice is as a slasher film from the era. It’s offbeat, smart about it, and delivers on its promises while adding in a splash of fun and some weirdly thoughtful layering. Alice, Sweet Alice is the epitome of why it’s worth exploring the undercurrents of cinema. This film gets a full recommendation and the latest Arrow Video Blu Ray encapsulates all of the great things about the film in a wonderful home video package. 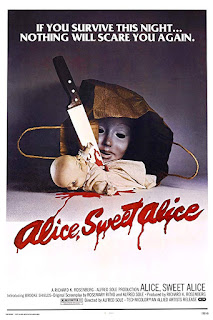