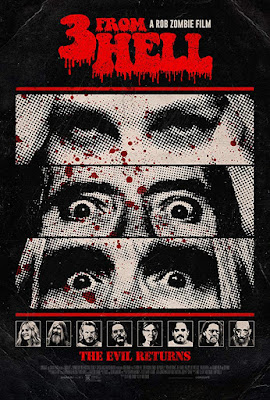 3 From Hell is a movie that requires some context to fully understand, so it’s necessary to briefly summarize how we got here first. Rob Zombie’s first movie, House of 1000 Corpses, tells us of the Firefly clan, a family of Texas psychopaths who trap tourists searching for the local spooky legend, an ex-Nazi scientist named Dr. Satan. In 1978, seven months after the killings depicted in the first filmSheriff Quincy Wydell leads a raid on the Firefly house. This kicks off the second film, The Devil’s Rejects, and the ensuing firefight kills most of the serial killing family and leads to the capture of the family matriarch who’s subsequently tortured to death by Wydell. Two members escape and act as our effective franchise protagonists. The first is Otis Driftwood, played by Bill Moseley (who’s own genre star-making performance in Texas Chainsaw Massacre 2 made him a natural fit in Zombie’s TCM inspired world) who is a murderer, rapist, and self-aggrandizing taxidermist with a nihilist streak. The other is Baby, played by the director’s wife, Sherri Moon Zombie in her signature role, who is a deranged, dangerous, childish, and a game playing killer with a tenuous grip on reality at best. The two are joined eventually by Captain Spaulding (Haig), an evil clown and purveyor of “The Museum of Monsters and Madmen”, who sent victims to the Firefly’s by spreading the legend of Dr. Satan and, as we also find out, is Baby’s father. After The Devil’s Rejects (a self-branded moniker) are finally captured and confronted by Sheriff Wydell, they escape again just to drive straight into a wall of police, and the firefight (set, reasonably on the nose, to ‘Freebird’) ends the violent, terrible lives of the three human monsters. It’s a neat, perfect capper to what is a horrid, unblinking examination of the human capacity for evil. There are no heroes in this story, only bad people and worse people, and most couldn’t imagine we would ever revisit anyone from the family.

And that brings us to now, nearly 15 years later. I went into 3 From Hell with nothing but apprehension. The Devil’s Rejects felt so real and visceral, like something that actually could’ve happened in a more exploitation film version of our real world, so I had no idea how Zombie planned to get the Rejects out of dying in the finale of the last film. As it turns out? He does it by simply by asking you to take a leap of logic. They each took around 20 bullets, survived, and were immediately imprisoned for life/death sentences. Frankly, this is a big ask, but it’s just feasible enough that if you’re willing to play along then the movie cruises along fine from there.

Spaulding, aka Cutter, is then put to death making Sid Haig’s presence in this film largely a cameo. As a brief aside, Sid Haig was recovering from major surgery and was unable to film this movie as written. There are complaints I will have going forward that indirectly relate to this, as one can only review the movie they saw, not the movie they want, but for what it’s worth? I do believe there would’ve been a tangible improvement to this movie if Haig had been able to reprise his role in a fuller sense. Regardless, soon after Otis finds himself on a chain gang (with genre mainstay Danny Trejo!), and is freed by long lost Firefly brother “Foxy” Coltrane (character actor Richard Brake, in his second major ride with Zombie, after 2016’s thoroughly forgettable 31), murdering all the guards, and other convicts (Trejo, no!!) on the way out.

Foxy and Otis decide to free Baby, who is having a rough prison existence. Having gone from slightly unhinged to full-on psychotic in the ten years she’s been in prison, we see her attack a prison guard during a parole hearing, and we see that same prison guard set Baby up to be murdered by other inmates in a basement. It doesn’t work out well, as the guard finds Baby sitting atop the other inmates’ corpses. Otis and Foxy kidnap the warden’s family and compel him to bring Baby to them, after which the three escape and spend the rest of the film in hiding. There is a lot of stylistic hyper-reality at play in this movie, from the curly-mustachioed floral-shirted prison warden to a group of Lucha masked assassins (wearing El Superbeasto styled Lucha masks, tying Zombie’s filmic ‘look’  together) call The Black Satans. The idea of serial killers knife fighting business-suited luchadores does thread a weirdly specific needle with me, but depending on your personal taste, the mileage may vary.

Sherri Moon Zombie and Bill Moseley have very little trouble slipping back into Otis and Baby, appropriately, and watching them at their worst is a true highlight of this movie. There is a long sequence in The Devil’s Rejects concerning these two holding a traveling band hostage in their hotel room and 3 From Hell doubles down on this concept with the hostage situation in the warden’s home. There is some of the usual Zombie weirdness in the form of a suddenly appearing party clown (an out of nowhere Clint Howard), but the sequence overall is cruel, mean spirited, and uncomfortable. It’s exactly what I’d have wanted out of a Devil’s Rejects sequel and largely the first half of this movie delivers. If you’re willing to accept the initial conceit of the three surviving the second movie, anyway. Unfortunately, I don’t want to give the impression that this is a recommendation because, for everything I did like about 3 From Hell, there was a bevy of problems.

Firstly, again not the movie’s fault, but the losing Cutter is a big blow to the movie. There are not a lot of characters who could believably put Otis Driftwood in his place and offer him any kind of resistance, physically or verbally, and Spaulding replacement Foxy “The Midnight Werewolf” is not up to the task. Setting aside my personal dislike for the “long lost family member” trope, Foxy, as written, comes off as Otis-lite. The same disregard for human life, but ever so slightly more affable. He’s the kind of guy who has a long conversation about wanting to give up the murdering life and start directing porn. There isn’t much in the way of tension between the three killers, and the relationships just don’t feel right. They’ve had to retcon these characters slightly, again, to make them fit the mold this movie needs them to fit in for the plot to move. Or, to put it more frankly, Otis and Baby don’t get along well and should be constantly fighting with each other without Cutter there to set them both straight. Then there is the bigger issue, that all horror franchises go through eventually, which is the deification of the killers.

You see, the thing that ultimately makes The Devil’s Rejects work and where 3 From Hell fails is that you’re never asked to sympathize with the Firefly clan. These are despicable human beings, who are worthy of nothing more than loathing. You’re meant to feel for their victims. It’s a portrait of evil, like Henry: Portrait Of A Serial Killer. Something you watch with haunted fascination. 3 From Hell eventually asks that you root for Otis and Baby, and that’s the movie’s real impossible logical leap. You can’t take people who we’ve spent nearly twenty years on the ground fearing and hating and then ask us to earnestly root for them. It’s not even a moral issue, it just undermines the characters. Otis isn’t as intimidating as he once was. Baby seems like comedic relief now (she has a hallucination of a cat performing ballet. That’s a thing that happens) and the whole movie suffers from this decision. It makes the two-hour run time feel like six. Richard Brake does the best he can with what he’s given, but he’s basically ice-skating uphill… and that’s not even getting into the fact that this movie still feels like it’s set in the early seventies (one framed photo of Reagan aside) which is a failure in production design, as it feels incongruous with the now aged characters.

If you’re a fan of Zombie’s work, 3 From Hell is definitely worth checking out on rental or VOD, as there is some good stuff in here. But the average moviegoer would probably do well to avoid this and even the aforementioned fan would enjoy this more with severely mitigated expectations. I really wanted to love this, but as it stands it’s merely alright.