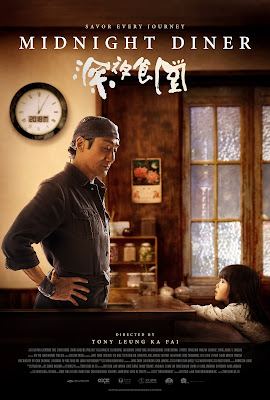 Tony Leung Ka Fai might be one of the greatest actors in the world. Not just from China or Hong Kong, but in the entire world. He automatically uplifts any film he is in, whether it’s pulpy action thrills, weighty drama, or, in the case of Cold War, both. He’s showered in accolades as an actor from both the Hong Kong and Golden Horse awards. Midnight Diner was going to be a film to see simply because he’s in it. What makes this film even more interesting is that it is his directorial debut too. It made me start to wonder if his talents onscreen could translate behind the camera and whether the omnibus style of the film’s concept could serve him well.

All of this combined is what makes Midnight Diner such a wildly missed opportunity. Despite another solid performance from Tony Leung Ka Fai, the film lacks a sense of direction and its multi-story pattern eventually crumbles under the melodrama and lacking screen development for any of the characters. It has its moments of heartfelt ideas, characters, and charm, but they are fleeting in a film filled with unjustified emotional punch and lacking cohesion.

Based on a graphic novel, which previously saw an adaption for Japanese television, Midnight Diner tells the story of the titular restaurant and its chef, played by a relatively subdued Tony Leung Ka Fai who desperately tries to not steal the film from any of the other characters/performances. Its narrative bounces between a plethora of various stories of the people who visit the restaurant and the almost fate like way that people and their lives cross paths.

On paper, this sounds fantastic. The intimacy of a stageplay-esque singular location that would bleed into an anthology of various kinds of dramatic tales is a prime area for great writing and nuanced direction. How the film eventually plays out succumbs to a stream of narrative voice-overs from the chef as he recounts various stories about his customers. It loses most of its natural structure in this format and instead of the nuance of characters and unique crossing paths, the film feels like a meandering and unfortunately forced plot. Some stories interconnect, some don’t. Some wrap up in horrifyingly cliché ways while others never claw their way out from under the weight of melodrama. The one thing that threads them all together is that none of them have enough time to truly develop the characters or plots for the emotional impact to work. The big emotional pay off exists for most of the stories, but none of them hit the heartstrings in any real way which undercuts the entire purpose of the movie since it has no real plot goal outside of those stories.

One of the most disappointing things about the film is that outside of one smaller story, regarding the police officer and his relationship to the chef, all of the stories eventually culminate as love tales. Some take odd ways to get there, including one with an elder gentleman who prods the various diners and his surprise relationship to the woman from the fish market who tends to drink too much, but all of them eventually arrive at some kind of romantic awakening. Some are sad, including the best story with the young woman who finds her voice as a songwriter which is horrifyingly underdeveloped as a love story, and some are about missed romantic opportunities that allow someone to find love for themselves. The problem remains that they all end up with the same basic emotional goal. Perhaps this was the goal of the film, but there is no establishing thread or continuity that sets up this. The promise of various dramatic stories about the human condition eventually end up as romance stories? It seems relatively shortsighted for the potential of its concept and the analysis of how people interact in the city.

To its benefit, the film does feature some great use of its setting, a neon skyline of Shanghai and the intimate tight streets of its neighborhoods, and there are a handful of performances that truly stand out with moments where the film potentially could have hit something expressively special. There are just too many subplots and it desperately needed to cut some of the stories to help support others. The problem remains that, in terms of scripting and direction, it never truly digs into the human experience of life in the city that it needed to hit. Midnight Diner ends up being a sappy, meandering story about stories for the sake of telling stories and, perplexingly, misfires on its intriguing premise. Even a solid performance from Tony Leung Ka Fai couldn’t save this one from its own dramatic flaws.

Written By Matt Reifschneider
Posted by DarkReif at 1:56 PM