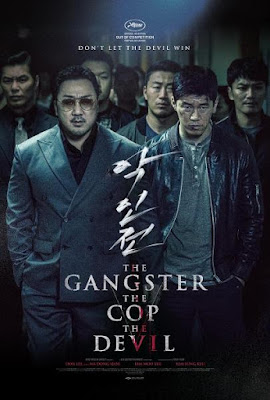 It didn’t take long for The Gangster, the Cop, the Devil to start making some waves when it premiered at Cannes Film Festival. Between a blissfully brilliant concept and having actor Ma Dong-seok (aka Don Lee because I guess they are still trying to make that name change a thing) in the film, it was primed to have certain cinephiles sold on seeing it. However, it’s when Sylvester Stallone announced his plans to already remake the film that I think even more casual fans stood up to take notice. All of this hype around the film could potentially spell high expectations and a chance for disappointment, but the film itself hardly disappoints when it comes to being a bombastic action thriller. The film plays its concept more straight forward than expected so this is not the artistic serial killer thriller in the same sect as The Chaser or I Saw the Devil. However, the combination of scene-stealing performances, brutal action set pieces, and an effective third act makes The Gangster, the Cop, the Devil a potent action experience.

As the title would indicate, there are essentially three main characters in this film that the narrative follows. There is the gangster, played by the always welcome and imposing presence of Ma Dong-seok who handily steals much of the film with his smoldering intensity that the film readily latches onto. There is the cop, a swaggering “do anything to catch the bad guy” detective whose cockiness and ability to bring a dark sense of humor to the film make him a smart bid for an audience favorite. Then there is the devil, the serial killer of the film that ends up bringing the two previous characters together through his ritualistic and disturbing random killings. The combination of the three is truly what makes The Gangster, the Cop, the Devil tick as a film. When the first two are on screen together, the chemistry and tension spark, as if the film is desperate to force repelling magnets together despite the natural aversion they have to one another. The performances from all three actors in the roles are phenomenal, ranging from nuanced character moments to big brash action set pieces and character clashes. The serial killer character doesn’t get nearly as much time to strut his material as the other two, thanks to a narrative that highly derails him from screen time as the protagonists try to discover who he is and hunt him down, but when he’s in the film he owns the disturbing force of evil he is meant to portray.

If there is any real place where The Gangster, the Cop, the Devil loses a bit of steam is in its relatively loose narrative. Moment to moment, the film inherently over impresses. The action set pieces, the chases, the interactions between the mob boss and the detective, they are all immensely impressive at the time. Director Lee Won-tae captures strong visuals and dynamic use of character dialogue as it goes, attempting to balance the sharp visuals of a big Korean release with the gritty nature of its violent content. Considering it’s only his second directorial feature-length effort, he captures a lot of the fun of the premise.

The strange aspect of the narrative is that, as a whole, it occasionally feels both rushed and too long. The film is almost 2 hours long and for a majority of the second act, the film feels more like a police procedural where the mob boss and detective attempt to put things together to beat the other to the killer. There’s a sense that there could have been some trimming here and there to get it tighter as a cat and mouse chase film. What’s happening isn’t bad, partially because the on-screen execution of the visuals and performances carry it through these moments, and it's usually more than impressive. The balance starts to lose the sheer velocity of its concept for a lot more script complexity that simply betrays the fun.

It should also be noted that the action in The Gangster, the Cop, the Devil is particularly solid. South Korea has been a staple for fantastic action films as of lately. The industry has a knack for bringing a Hollywood sense of budget to more traditional and intense Asian style action. This film is no different. Whether it’s an immense gangland siege, multiple hand to hand fight sequences which regularly show off why Ma Dong-seok is such a formidable physical presence, or the brilliantly executed final chase sequence through the lamp lit alleys and underground businesses, the film excels in this area – even if it is not strictly an action film with its thriller and occasional horror elements.

As a bonus, the Blu Ray release of The Gangster, the Cop, the Devil comes with a couple of fun behind the scenes featurettes about the making of the film and the characters. Neither are particularly long, but both add a bit of backdrop to understand how ambitious the film is overall that fans will want to have on the home video release.

Truthfully, while the loose narrative loses its focus at times, the rest of The Gangster, the Cop, the Devil is a high-speed thrill ride of genre splitting cinema. The style is effective, the performances layered, and the leaps from thriller to horror to action are bold. The big moments are larger than life and executed with panache. Although it has its flaws in its script or in how it flows, the rest is some of the best material of the year and worthy of checking out.