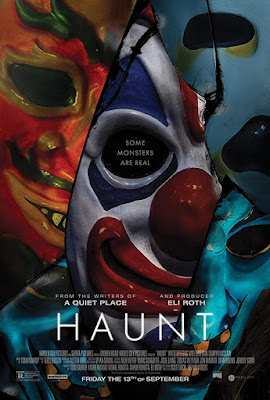 If you were to judge it based on its overall marketing, Haunt is the kind of film that should have dwindled away on VOD. There is a strong movement for “haunted house” horror films. Not the ones about ghosts, but the theme-park style haunted houses that people love to visit around Halloween time. Some of these have been good, Hell House LLC for example, and some have been less than good. Either way, there seem to be more and more lately as the genre continues to grow. When Haunt was announced it didn’t make much of a splash overall in most of my circles. It was getting a limited theatrical release which was the same day as VOD. Even though horror fans were most likely to see it, it’s the kind of film that to get a release without much fanfare.

There is one angle that made it a fascinating addition to that subgenre. Haunt was written and directed by Scott Beck and Bryan Woods and it’s produced by Eli Roth. The directors/writers proved they could modernize old school horror to a very successful extent with their written material for A Quiet Place and Eli Roth is relatively smart in the producer’s chair in bringing up talent. Fortunately, the combination proves to be very effective and Haunt ends up being one of the best films for the haunt movement and one of the best finds of the year.

The film’s basic premise is not complicated. Six college age students leave a Halloween party to visit a new extreme haunt in the area. The haunt is creepy when they arrive, they sign waivers, give up their cell phones and proceed into the house, As they go through, the terror becomes more real and by the third act, it’s a survival film. That’s it. Really. There are a few subplots here and there, including one about domestic violence with our lead heroine Harper, played by Katie Stevens who handles the burden of the emotional core of the movie admirably, but the basics of the horror are there and the film doesn’t try to overcomplicate things.

As Haunt starts, it plays things straightforward and hits a lot of the same beats as its peers in the sub-genre. The plot might be generic in how it runs through the basics, but the execution is rather impressive. The performances are decent enough from the young ensemble and while they run about all the broad stroke college characters you might expect, the chemistry and honesty in the acting carries it through. The direction has a spit n’ shine to it that makes it feel notably cinematic and much above the usual VOD films that come to the viewing queue. The directors, Beck and Woods, bring knowledge and professionalism to the execution that could have easily been squandered for another Saw or Collector knock off with any less vision. They double down on the tension first. So when the violence bursts onscreen, it’s an effective break to that tension and feels more impactful. Double points because most of the special effects are practical and very old school in the approach. Partner that with the relatively simple but impactful design of the various characters stalking the haunt and the combination proves potent.

This leads to the acknowledgment that the real reason Haunt ends up being one of the biggest surprises of the year is the overall restraint and creativity in its myth-building. Far too many films, particularly of this sub-genre, become too infatuated with the mythology of the setting or villains and end up over-explaining it. Haunt shows the maturity and cleverness to only hint at the possibility of the mythology. Outside of a brief sequence in the opening credits showing the building of the haunt, the film leaves the place and its inhabitants as large question marks. There are key moments and reveals to the possibility of something larger and more sinister on hand which works like gangbusters, but that is not the story for this film to tell. The audience is following our ensemble, Harper mostly, and it’s their/her story first and foremost. Haunt is merely laying the basic groundwork for the possibility of a franchise and it’s astute.

Haunt might be another entry into the quickly booming Halloween haunted house horror sub-genre, but the execution of its basic plotting and the subdued narrative is what truly lifts it well above most of its peers. This film is not aiming to trick its audience or try to win them over with some overzealous gimmick, it’s just pure and well-executed horror that finds its voice in the small moments. Haunt is a fantastic way to start off the Halloween season.