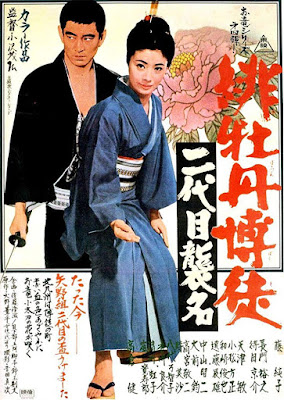 “I wish you good luck from the shadows.”

By now the formula is established. The first three Red Peony Gambler films share a common structure and narrative that solidifies the identity of the series, but by the third film it was starting to wear thin – even if that film ends up being quite the impressive little period yakuza film. For the fourth film of this franchise, with the subtitle Second Generation Ceremony, the series takes a somewhat unique direction that differentiates it from its predecessors. One part of me enjoys the film for a relatively refreshing approach to telling the next chapter of Oryu’s saga as a wandering yakuza gambler. The other part of me found the film somewhat of a chore to sit through with its sluggish pacing and occasionally overbaked plot. Although it’s a flawed film, Red Peony Gambler 4 is still a decent film, but it doesn’t find the balance and effective thematic depth of the three films prior.

Second Generation Ceremony starts off promising enough, as the audience find themselves once again on the road with our titular heroine, portrayed by the talented Junko Fuji. Like many of the other films, she essentially stumbles into another conspiracy, haphazardly defending a man on the run from a corrupt businessman and his clan only to realize this villain is going to be a pain in the ass again and again. The core plot of the film revolves around a business dispute between two yakuza groups who want to finish building a railroad. Naturally, one group is sinisterly evil and the other is good. When the leader of the good group passes, he asks Oryu to step in for him and finish the railroad. Complications ensue, there are rioting boatmen that don’t want the railroad to take their jobs, time is running out, and the body count rises as the evil group desperately attempt to sabotage her efforts.

The core narrative is relatively the same as the rest of the films. Second Generation Ceremony caters to Oryu’s talents and screen presence. She meets a wandering and mysterious yakuza man who helps out in the second half, there is a conspiracy, and the themes of a changing Japanese landscape (quite physically with the building of a railroad) create a fantastic backdrop for the film. In these ways, it certainly plays out like the other films. There is even a new comedic side character, a rich man with a harem of women, who replaces Wakayama’s offbeat character as a goofy gentleman who swoons over our protagonist. For fans of the series, the structure and basic concepts remain intact and very much continue the style of the series enough to appease the fans.

However, the film takes a decidedly different angle for most of the rest of the film in terms of tone and approach to the plot. Although Oryu is presented as something of an “outsider” to the events initially, she quickly acclimates and truly leads a clan here. Winning over her critics with her empathy, smarts, and daring. She’s not necessarily the wanderer with nothing to lose but her pride and faith in justice. Along with that, the film doubles down on its themes of Japanese progress and the battling ‘old versus new’ approach to a changing country. The major issue with all of this though is not the new angle, but the overall surface-level approach to it all. The first three films feature sly artistry to them, messages about gender roles, antiquated yakuza ideologies, and a sense of visual depth to bring those to the surface plot. Second Generation Ceremony lacks a lot of that. When the film should be embracing those things, it drags. The second act is a blur of jumbled narrative and for every moment that works, there is one that doesn’t. Emotionally, it doesn’t hit the depths needed to carry it through the formula. The performances are decent enough and the final action set piece is impressively atmospheric and foggy, but the film takes some large swings on secondary plots that don’t connect.

All in all, Red Peony Gambler 4: Second Generation Ceremony is a decent watch. The new angle to the material is refreshing, there are some solid set pieces, and there are a handful of performances that stand out. The rest of the film just doesn’t match the pace and balance of the previous three films stand on its own. There is still a lot to enjoy here, particularly if a viewer has enjoyed the previous entries, but this one tends to fall flat.