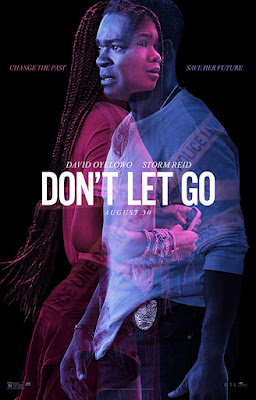 Don’t Let Go is a Blumhouse Tilt movie that snuck into theaters last week to little fanfare. Much like other movies released under the Tilt name, this film has a lot of bold ideas and a reasonably young, fresh talent expressing those ideas. Like a couple of other BH Tilt movies, namely The Belko Experiment, The Green Inferno, and Upgrade before it, this plot is well navigated territory with a slight genre tint to help it stand out. Does it work as well this time as it did for those? Not quite and that’s too bad.

David Oyelowo plays Jack, a homicide detective with a close, wonderful relationship with his niece, Ashley (Euphoria’s Storm Reid). Ashley’s father and Jack’s brother is a former dealer and not a particularly great father. After forgetting Ashley at a mall (with Jack needing to drive her home) he gets an earful from Jack.  A few days later, Ashley calls her uncle to say that whatever he said worked and her father has never been better. Sadly, that very evening he gets a weird call from his niece that cuts off, and when he goes to check on her, to his horror, he finds that his brother killed the whole family in an apparent murder-suicide. A couple of days later, Jack mysteriously gets a call from Ashley. He thinks it’s shock, or maybe insanity at first, but then he slowly works out that she’s really calling him… from a week ago. Here lies the crux of this movie. He has to work with his niece in the past to try and fix the present, and in the course of it unravels a mystery that may prove his brother’s innocence and perhaps prevent their deaths altogether.

This is not a new setup in any significant way. As a matter of fact, Frequency (2000) uses more or less the exact same setup. What does Don’t Let Go do to differentiate itself from the pack? Unfortunately, nothing. There are cool moments in here, like when Jack discovers that he can alter events through time (having Ashley paint a big red “X” on a garage door for example) and the camera effect for that change occurring is really visually interesting. The plot is mildly interesting. The cast is decent (including the always nice to see Alfred Molina, as Jack’s police captain), and as I said the sci fi hook, albeit generic, is interesting. That’s ultimately what I came away with from this movie. It was interesting. Tragically, more interesting than good.

Nobody is acting at their capacity. Not one single person is believable or chewing scenery and both options would’ve been much more memorable. Same with the sci-fi schtick. It’s interesting, but only used in a sense of plot functionality. The movie never really uses this plot mechanic in a clever way, it doesn’t explore the consequences, pitfalls or ethics of what’s at play. The movie is there to get in, tell its story and get out. Frankly, a streamlined plot in what’s an ostensibly high concept movie isn’t necessarily a bad thing. Just look at Shane Carruth’s Primer. That movie barely has a narrative through-line and it largely exists as a way to express this really neat time travel concept if you can wrap your head around it. In the last 15 years, I’m still not sure I fully get that movie and that makes for a compelling watch. Being as Don’t Let Go’s ‘time travel’ is just presented as a mysterious force (?) it just ends up making the film forgettable.

I don’t want to imply that this is out and out bad. As a genre fan and as someone who supports Blumhouse especially their Tilt subdivision, there are things to like here. Just not enough to justify a ticket purchase. Or even a rental. This is definitely “catch it when it’s streaming while you’re mindlessly scrolling through Netflix, highlight it, and say ‘Oh, yeah. This was a thing’” territory. Between this and Ma, it seems Blumhouse is trying to resurrect the mid-budget thriller and I think that the overall effect is going to be positive. Even if they stumble a bit in the process.

Written By Sean Caylor
Posted by DarkReif at 2:31 PM