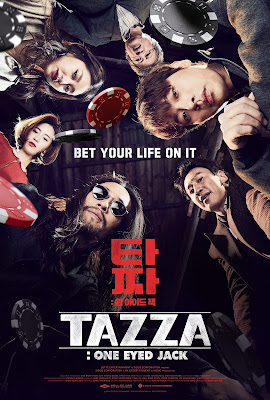 After one of the writers here at Blood Brothers raved about the first two entries into the Tazza series from South Korea, I was rather ecstatic to be able to see the third entry in theaters. Although I have not, at this time, seen the first two entries of the series, the impression I understand is that the if there is any kind of direct connection then it’s minute at best. This third film, under the title Tazza: The One Eyed Jack, is a highly entertaining film. Like it’s gambling thriller basis, One Eyed Jack doesn’t win all of the hands that it deals out, but it wins the long game by playing all of the cards at the right times – folding when it starts to get off track and going all-in during the finale. It might not be the most efficient film in telling its story, but the message rings loud and true and the thrills of its swindling plot are a sure-fire bet.

The basis of One Eyed Jack follows a young man, in college, as he begins to neglect his studies to focus on where his true skill lies: card playing. It’s only when he loses everything and ends up on the bad end of a loan shark does he find his true calling: as a gambling swindler under the guidance of a mysterious man known as One Eyed Jack. They put together a team to con a corrupt businessman, but things get complicated when their identities come under scrutiny and a mysterious card player named Demon enters the scene.

In an effort to be honest, my expectations for the film were tempered. The trailer looked entertaining, but the conman and swindler films have started to run a bit thin for me. How many times can a film use the basic premise of con/heist as a style before it starts to be as predictable as possible? There are only so many times someone can watch a film inspired by the new Ocean’s Eleven, you know? Fortunately, South Korea has perfected the blending of mainstream cinema and genre work which is on full display with One Eyed Jack. At the core of the film, it’s a combination of a gambling film and a con man flick, but it’s not afraid to dig into dark thriller, comedy, gangster elements while still managing to embed it all with a sense of purpose and heart. Many of the sequences might end up being predictable at the foundational writing level, but the style and ways that it goes about hitting all of the structured blueprints make it feel fresh. It’s not the first film with a young guy being introduced to the criminal world, nor is it the first film to take a handful of quirky characters with hidden talents recruited to work on a patchwork team, but the manner that One Eyed Jack plays it out makes it work.

One Eyed Jack breaks up its formula into very distinctive sections. Running just short of a robust 140 minutes, the film has a knack for delivering what could be essentially seen as three “sections” with details that carry through versus tone. After a rather lengthy set up for the first section, introducing our main protagonist Doh Il-Chool who is played with a pretty impressive range by Park Jung-min, the film kicks from a sly character drama set up into the swindler section. This is where the titular One Eyed Jack is introduced, played by Ryoo Seung-Bum in a film stealing and intimidating performance, and the film slides away from the dramatic tones for a much more comedic one. It introduces the rest of the team and does the cliché, but incredibly stylish, ‘here’s the plan explained as we show you what’s happening on screen.’ Although these two sections feature a ton of charismatic performances, a ton of great style from director Kwon Oh-Kwang, it’s nothing truly impactful and feels like it can drag at times with the detailing and plethora of subplots that are hammered into the film.

However, One Eyed Jack has an ace up the sleeve. It’s the third section of the film. After a well-executed, but rather humdrum start, the film immediately makes the most with all of the work that it has done establishing the characters, plot, and narrative to this point. As soon as shit hits the fan for our anti-heroes, the film kicks it into hyperdrive, diving into surprisingly dark and violent territory. It challenges its viewers to make sure they were paying attention in the first part because the tricks it has to play require a bit of work on its audience and the pay off is massive.  It makes some bold choices, including sidelining a large chunk of its cast in some shocking ways. The film performs plenty of slide of hand and it can be overwhelming, compared to the relatively slow and intentional build of the first portions, but the manner that One Eyed Jack hits it out of the park is worth the work.

For fans of South Korean cinema, Tazza: One Eyed Jack delivers on all of the things one might expect. It’s a dense film with a lot of fleshed-out characters, a relatively complex plot, and the style is upfront and charming. It’s occasionally too long in how it sets up its games and the first two portions of the narrative play out in some formulaic ways, but a massive third act makes all of the issues of the first part feel like intentional red herrings to how it pays out. The performances are impressive and the film moves from safe territory into some dark places to incredible benefits. Like any good card player, Tazza: One Eyed Jack baits its viewer into thinking they know what cards it is holding and then dumps raises the bets. By the time the film ended, I was completely bought into this franchise and went home and ordered the first two. Let’s hope they live up to the entertainment that this one delivers.