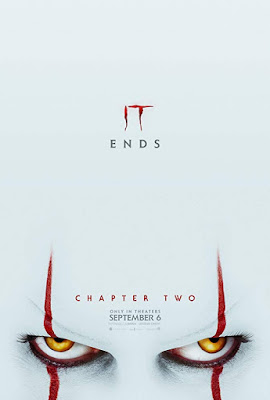 It: Chapter Two serves as a really good reminder of why people remember and celebrate the childhood half of the story. That may seem harsh, but if anything, this movie does deserve praise for making the material as interesting as it’s possible to make it. The adaptation of the story and some of its more esoteric elements are at the very least bold and interesting. I’m a long-time devoted King reader, and I grew up with the Tim Curry miniseries, but I’m going to take this film strictly on its own merit. For a record of my potential bias, the miniseries doesn’t really hold up, and probably wasn’t that good in the first place, and the book is definitely upper tier King but admittedly kind of a mess. Especially the ending…

Before we can give a brief synopsis on Chapter Two, perhaps we should briefly touch on Chapter One. The first part sees the Loser’s Club, a group of kids in Derry, Maine think their insane bully was their biggest problem. As it turns out, a fear and child devouring demon-clown named Pennywise is stalking their town, proving a slightly more significant issue. After one of their own gets taken to It’s lair, the remaining Losers chase Pennywise home and by mastering their fears, they’re able to save their friend and drive the creature away, injured and possibly dying. The losers then vow that if it ever comes back again, they’ll return to Derry kill it for good. Chapter Two opens with Pennywise making its presence known again. Mike (“The man your man could smell like,” Isaiah Mustafa) calls the other members of the Loser’s Club, the writer Bill (McAvoy) who can’t nail a landing (and one of the greatest of a long line of Stephen King self-insert characters), stand-up comedian Richie (Hader), risk-analyst Eddie (Ransone), abused spouse Beverly (Chastain), architect Ben (Ryan), and Stanley (Bean), who’s grown up career is never made clear. Everyone’s acting is on point, and they all do well channeling their younger versions’ actors’ defining traits, but special mention should go to James Ransone’s eerie channeling of young Jack Dylan Grazer’s neurotic energy and Bill Hader for doing the heavy-lifting of being the comic relief in such a long and dark affair. The movie does a good job of reflecting on the kids’ personalities and taking them to a logical if tragic, place. Beverly replacing her abusive father with an abusive husband and Ben losing weight and becoming successful but always alone are the best two examples of this, but all of them feel more or less right.

The losers, who left Derry, start to remember what happened to them as children and realize that they were unaware they’d even forgotten. The town has always had a strangeness to it, and this is amongst the strangest traits. Mike conveys that he spent the last thirty years researching Pennywise, and discovered an ancient Native American ritual that may seal it away for good. The Ritual Of Chüd requires them to go on separate journeys of memory and retrieve tokens of their childhood. This exists as a narrative device to both give them hope to defeat the monster and it gives everyone a solo journey to complete. This is ultimately both the strength and weakness of It Chapter Two as a film, particularly the adult half of the narrative. It’s esoteric and rambling, shamanistic and spiritual. It makes for a reasonably messy story that was always going to be a tough sell in a visual medium. Even in the pared-down version of all of this where they don’t bother with Gan, the turtle that holds the world on his back, the visions largely consist of Pennywise’s previous forms and its history. The emotional and character narratives suffer at the hands of the film’s focus on the mythology.

What it does give us is a bunch of disparate, almost vignette-like scenes with some high peaks but a lot of really low valleys as well, which is really rough at a robust 170 minutes. Some really good material includes the revelation of Richie’s real fears, played brilliantly in two timelines by Stranger Thing’s Finn Wolfhard and national treasure Bill Hader. When the adult Richie is confronted by Pennywise everyone in the background dead stops and stares at them. No special attention is drawn to it, it’s just a creepy bit of atmosphere used to great effect here (and in the library scene in the previous entry, actually). Less effective is Bev’s return to her childhood apartment, which includes a scary lady who moves in a way I can only describe as a skitter. It’s unintentionally funny, and that’s problematic in the face of juxtaposing the sequence a flashback of Bev’s childhood that is creepy and legitimately heartbreaking.

As a matter of fact, that scene in Beverly’s apartment is a really solid microcosm for my issues with the movie overall. It’s just disjointed, and every time that anyone thing starts to catch wind, the sails are cut in favor of the next scene. It’s overly economical plot-wise, which is an insane statement about a near three-hour movie. It never does hit a smooth pace, so you feel every minute of it. Not to say that It is boring or a disaster. Far from it, but in the face of it’s more engaging previous entry It Chapter Two is mildly disappointing. Its over-reliance on CGI monsters is more blatant than the previous entry, and I do realize that it’s a personal thing, but very rarely does that lead to anything more than eye-rolls. Some scares are really good, Bill Skarsgård remains petrifying as Pennywise (a scene where he’s hunting a little girl at a baseball game is especially unsettling) and there isn’t really a single big problem I can name that would justify not recommending It, but the plurality of the small problems left me wanting and I can’t shake the feeling I’m not unique in this regard.

If you liked the first one, and are excited for this one, I would definitely say see it as soon as possible. However, I think reasonably tempered expectations may go a long way into enjoying this movie, and even at that, it may just leave you kind of wanting to watch the first again.