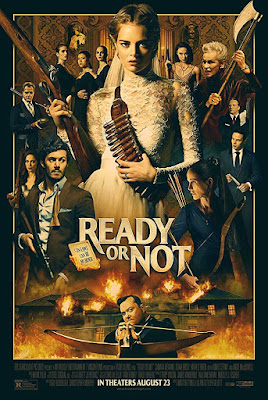 Horror and comedy are two great tastes that taste great together. In a broad sense, it’s because they rely on the same psychological concepts to play out. They’re both about the building of tension and lean on resolving that stress in a surprising way. Ready Or Not enters a long lineage of this sub-genre and does so in a fun way. Perhaps not wholly unique, but it’s fun and it has style. It draws a specific line juxtaposing a gore heavy, violent and hard “R” slasher sensibility with a sardonic, low-key, borderline disaffected sense of humor and then rides that line for nearly all its worth before getting out and walking away. In other words, it’s a pretty perfect movie for the end of the summer and wonderful counter-programming to the standard August dumping ground fare.

Grace grew up a poor orphan who never wanted anything more than she wanted a family. Alex (Mark O’Brien from Arrival) the estranged scion of the Le Domas gaming dynasty is madly in love with her and happy to marry Grace, save that he says he’s from a family of evil jerks. Still, to make her dream come true he swallows his objections and gives her the wedding day of her dreams, with a whole established family to boot. Everyone except Aunt Helene (character actress Nicky Guadagni) seems pleasant enough, and the wedding goes off without a hitch. That night, Grace and Alex are trying to consummate their marriage when Aunt Helene shows up in the room and announces that it’s time. Grace is obviously confused and disturbed, and her husband explains that in their family, a gaming dynasty, when you marry in, its tradition to join the family in a random midnight game. Grace draws a card from an elaborate puzzle box that simply says “Hide and Seek”. She’s told all she must do is hide until dawn. And off she goes, hiding in a dumb waiter, talking to herself about what a silly way this is to spend a wedding night. It isn’t long, however, before she discovers the game’s twist. The family needs her to die by dawn or, as the family legend states, the entire family will die instead.

This movie is your basic Most Dangerous Game scenario, and even has some small flavor of something like The Final Girl, so this movie uses its comedy to separate itself. And to that point? Samara Weaving proves to be something of a godsend. Hugo Weaving’s niece (really, look it up) is rapidly becoming a minor horror icon and this movie showcases exactly why. She has to be a scream queen, a gore victim and perpetrator, the emotional core, the comedy, AND the straight man and she doesn’t falter a single bit in any of those capacities. As I mentioned before, the humor in this movie is really quite surprising in how uproariously mumblecore, sarcastic and borderline silly it all is existing as something of a meta-commentary on both horror, specifically of the human hunting genre, and the wealth divide. This is especially emphasized in the fact that Grace isn’t the only one that’s aware it’s all weird. The various siblings’ spouses all know this is insane, hell, the members of the family itself are aware that it’s weird. There’s also a surprisingly strong emotional core to this movie about family. Questions about values, traditions, and the very meaning of family. A common thread throughout is how generally unwelcome additions to the Le Domas family are, a strong motivator for Grace early on, who’s yearning for acceptance drives her to acquiesce the strange midnight tradition in the first place. Ready Or Not does operate off of a strong core of logic as well when she questions why Alex didn’t warn her about the whole scenario. He says that she wanted to get married and she would’ve left otherwise, but if he’d told her everything upfront, she’d have left anyway, an ugly position because he truly loves her. It’s an interesting dynamic, and the chemistry between Weaving and O’Brien feels very genuine. I was honestly and earnestly rooting for them the whole time.

There isn’t much negative to say about this movie that can’t be fully chalked up to this being the creative team’s first full-length movie (all the writers and directors of this film have worked on various short horror films, including some from V/H/S). The pacing feels odd at times and the joke timing can be awkward, but so much of what’s there is so inherently funny anyway that I, at least, completely overlooked these issues fairly easily. Also, while this isn’t a complaint for me, personally, the violence in this movie is extreme and over the top to the point that it’s humorous in and of itself, which in the current social climate I could see being an issue for some. Ready Or Not also has some really strong opinions on class stratification that I could see being bothersome if you’re of a certain fiscal persuasion, but honestly? At this point, I’m really reaching for things to legitimately critique.

This movie’s execution hits with an astonishing cool confidence that you usually see from something like a David Fincher movie, and in this case, I don’t think Ready Or Not fully justifies its confidence, per se, but they went all in, laid their cards on the table with a big dumb grin, and managed a winning hand against all odds. I can not recommend Ready Or Not highly enough and am really excited to see what comes next from Bettinelli-Olpin and Gillett.