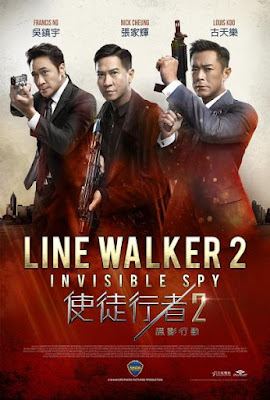 Who out there remembers Line Walker? Anyone? Despite being – from my understanding – based a popular TV show and an outright box office success in China, the film made relatively no impact in the US. Don’t feel bad if you don’t remember Line Walker. In the US, the film made one of those ninja quiet debuts on Netflix and essentially ceased to exist for western audiences. It’s not a huge issue because let’s be honest, Line Walker was enigmatically ‘meh.’ With the talent, it should have been a rip-roaring time. It’s not. Since it was a huge hit in China though, that only meant a sequel was coming. Naturally, it’s a “name only” sequel featuring most of the same cast and the same director, but it’s a brand-new film. If you’re like most of the US, don’t worry if you haven’t seen Line Walker because you’ll be able to jump right into Line Walker 2: Invisible Spy with no preparation. Fortunately, it’s also a film that’s an overall step up in quality. It’s still an outlandishly convoluted film, hammering down on its modern spin of heroic bloodshed themes, but it’s sprinting pace, fantastic cast, and outright astoundingly fun action make it worth the watch.

The overall set up of Line Walker 2: Invisible Spy is a lot to swallow. That’s just to get things going and set up the story to unfold. The main plot revolves around a terrorist group that has infiltrated most levels of the government by kidnapping children and training them to be ‘invisible spies.’ (Side note: if a spy isn’t invisible, aren’t they just a terrible spy? I digress.) We are introduced to three gentlemen that are thrown into the fray of this conspiracy by a young woman hacker who has information about the terrorist group and a list of their spies who then drops an information bomb – one of our three protagonists just might be a spy too.

The established plot is not all that unusual. How many espionage action films come out where a list of undercover agents is the core conflict? Too many. However, because we are meant to suspect one of our three main characters, played by the three major names of the film Louis Koo, Nick Cheung, and Francis Ng, the film needs to give us some hints as what the reveal will look like later. Thus, Line Walker 2 actually opens up with a massive flashback sequence of two young boys in a village who are brilliant – as shown by an entire montage of them competing with Rubik’s cubes (?) before terrorists attempt to kidnap them and only end up taking one who is hurt badly on his back. Why is this important? Great question, because there are only three small details from this sequence that come back later to add twists and really, it’s kind of useless information that could have been handled in a less awkward way via dialogue later. This is how Line Walker 2 starts though.

Once that’s out of the way as awkward and unintentionally hilarious as it is, the film then jumps into its modern slant of a heroic bloodshed film. We are introduced to our triangle of cops and told that one of them is a spy. Each introduction is blissfully cheesy, where Nick Cheung gets into a massive and well-choreographed fistfight on a bus, Francis Ng avoids two terrorist vehicles in a convertible sports car racing to catch up with the bus, and then Louis Koo comes in to challenge them via an interrogation of the young woman as a power investigator that immediately disrupts the flow. If anything, there are two reasons to see Line Walker 2. One of them is this triumvirate of iconic actors. Their chemistry sparks, their history of characters gives them lots of layers to tease out, and each of them dig into their roles with energy that works. Their friendship (and possible antagonist being hidden within it) makes the film move as the narrative hits a lot of tropes and only continues to pick up the pace to its wild finale.

The other thing that makes Line Walker 2 a fantastic watch is the outlandish and non-stop action of the film. While the plotting might be relatively redundant and the narrative a tad sporadic, the action in the film is ambitiously executed. From a massive gun battle in broad daylight in the middle of a busy street to the previously mentioned fistfight on a public bus to a finale that features a chase sequence during a bull stampede (oh yes, there are plenty of substandard CGI bulls to be seen, but it’s so out there that it’s kind of brilliant), Line Walker 2 delivers on the thrills and kills that you would expect from Hong Kong cinema. It’s all impressively shot, well-edited, and pulse-pounding action extravaganzas.

Overall, the experience of Line Walker 2: Invisible Spy is mixed. It starts off in an unnecessary flashback sequence and the overall writing is convoluted where it only surprises when it drifts away from the espionage action blueprint that it follows so diligently. Fortunately, director Jazz Boon knows that while the script is patchy, he can rely on two things: shooting incredible action and throwing the weight of the film’s narrative on the shoulders of three stellar actors to carry it. This is where Line Walker 2 succeeds and fans of modern HK cinema will want to see if for those reasons.