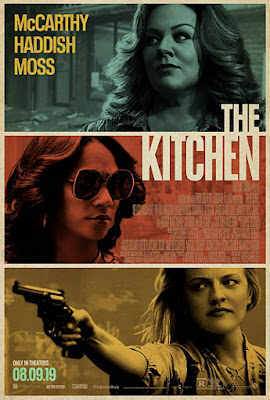 What does one do hot off of a writing Oscar, especially after writing something as instantly seminal as Straight Outta Compton? Writing and directing a female-centric period mob drama based on a DC/Vertigo comic would not have been my first guess, personally, but I do respect the unexpected move. Bold in its casting, The Kitchen exists as a dramatic acting showcase for both McCarthy and Haddish, typically better known for their comedic chops. The setting is interesting, and the concept of the story is infinitely engaging, potentially… with so much lined up in The Kitchen’s favor, it seems strange that it just never quite comes together.

It’s 1978 and in Hell’s Kitchen, a neighborhood in New York that at the time was still crime-ridden, things were being run by the Irish mob. A trio of said Irish criminals are getting together for a night of ‘work’ and we see them all saying good evening to their significant others. Kathy (Melissa McCarthy,) a loving wife and mother who’s shown to be in a reasonably healthy relationship given the circumstances, kisses her husband goodbye, and comforts and cares for her two children. Ruby (Tiffany Haddish) is a woman in a mixed-race relationship with the boss and living in a culture that’s not very accepting of it and she’s dealing with an overbearing and hateful mother-in-law (played exceptionally well by character actress Margo Martindale). Claire (Elisabeth Moss,) both meek and chronically abused, is introduced holding frozen vegetables to a fresh bruise on her face with her husband walking out making fun of her. The three men end up robbing a liquor store, in an attempt to build enough capital to get into loan sharking, and ultimately build the Irish back up to a place of prominence in the city. Unfortunately, the FBI is staking the boys out and the men are taken down and given three years in prison. The remaining mobsters, led now by a petty jackass sycophantic to Ruby’s mother-in-law, promises to take care of the trio of women, but come payday they’re not given nearly enough to live on. So Kathy, Ruby, and Claire decide to take their chances running things themselves.

It’s a reasonably good, if tired, setup. Where this all falls apart is the fact that no two actors in this movie can seem to agree on what the tone of the film is. Moss is in a pulpy comic book movie, full of gory violence and dark humor, McCarthy thinks she is in Goodfellas and Haddish is doing her own thing altogether. No one in the movie is out and out bad, but this basic miscommunication in style leads The Kitchen to overly feel like a dull, unfocused and badly paced mess. Coming at this from the angle of knowing it’s an adaptation of a reasonably well-regarded crime comic book helps make sense of the pacing because it legitimately feels like there are huge missing chunks of plot. This is really unfortunate because there are twists and turns in this that should work. Instead, however, much of this movie falls victim to the “and then” storytelling. The only character given any real arc to speak of is Claire since Kathy is set up as having grown up in the criminal life or at least around it (though that’s something of a muddled plot point as well) and Ruby is presented as a character who was a step from striking out on her own anyway, self-assured even with the world’s judgmental eye on her.

It’s never fair to speak of a movie in terms of what it could be because you can only critique the movie that came out, but the most unfortunate part of the whole experience is that there are strong flashes of quality and panache in The Kitchen. It’s definitely in the territory of almost fun, almost heartbreaking, almost a fist-pumping good time. You can see the movie it wanted to be in sequences like the introduction of Gabriel (Domhnall Gleeson), a sociopathic ex-military, ex-hitman into the story. Claire is being attacked, and he just calmly walks in, shoots the attacker in the head, and cooly says, “Hi.” This is followed immediately by two wonderful scenes; one in which Gabriel is attempting to teach the women about prepping and disposing of a corpse. This scene wonderfully develops all three of our principal characters by showing their disparate reactions to seeing a cadaver’s leg sawed off, for example. Although it’s kind of a predictable character turn for Claire to enjoy the power shift of controlling life and death as she embraces this and further lessons, it’s also enjoyable in this pulpy way and it is played really well by Moss. Whereas McCarthy and Haddish both decide that they’re happier being the brains of the operation. The other scene is a montage of Gabriel being effective muscle, which includes chasing and icing a pimp in the middle of the street, dropping the gun, and walking away. This is played for comedy and it is effective in the moment. Soon enough there is a serious scene with the girls meeting the Italians in the Bronx, and it once again The Kitchen thinks it’s a Scorsese crime drama.

For all the heavy lifting Gleeson and Moss do to try and make this entertaining again, The Kitchen just falls short in almost every other way. The movie is trying to say a lot of things about women, race relations, crime, and how those things all slot together, but nothing in the movie ever feels like a bold new perspective. It’s just trying to copy the successes of films that told similar and better versions of this narrative. The Kitchen presents a deconstructed crime narrative but never throws any new spices in to elevate the concept and as a dish, it just left me cold.