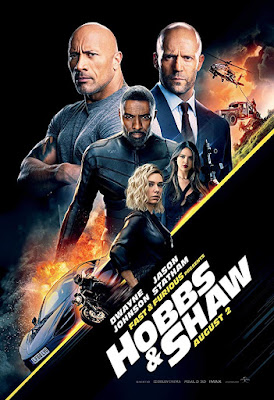 The Fast & Furious films have basically settled into being a superhero franchise that takes place in a universe where cars are a superpower. Ever since Fast Five I have said and believed this. It’s not even an insult to me. I love superhero cinema, I love cars, and I love The Fast and The Furious… which is why Hobbs & Shaw, the first F&F spin-off, surprises me with how well it worked. I’m a total mark for this franchise already, so I went in expecting to like this, but I was pleasantly surprised anyway when I came away realizing that, furthering my metaphor, Hobbs & Shaw is what a Bond or Mission Impossible-like spy plot taking place in a superhero universe where cars are a superpower would look like. This movie has cracked the formula that xXx wanted to so badly, and I hope this sub-franchise really gets some legs under it. One or two more iterations, and we may actually get a modern Goldfinger. Or at least a post-modern one.

I am only going to discuss the first act of this movie, by means of a synopsis, but this movie’s marketing has focused on the star power and the action, so it’s shockingly easy to go into completely cold if that’s your preference. And to the people I’ll lose because of that alone, I say this spoiling only the ending of my review, it’s really good. Like, really really good. Absolutely franchise-starter material, and I recommend it to fans of Fast and Furious movies, of action spy movies, of buddy cop movies and of pure spectacle.

That all said: This movie starts out with the pedal floored as an MI6 team is conducting an operation to recover an engineered virus, created by a techno-cult as a means to kick start a Transhumanist-evolution revolution. The British agents are really at the top of their game and complete the task with deadly and rapid efficiency. Then, a single man appears, Idris Elba’s villainous Brixton, who proceeds to completely and violently disassemble the English squad. This illustrates one of the great strengths of the movie, actually, early on. Everyone in this film is capable. Nothing that goes wrong in the plot does so for any reason other than an impossibly clandestine but equally ubiquitous villain organization. And, as if to exemplify that exact point, the one survivor of the MI6 massacre injects herself with the virus in question and runs off, leaving Brixton to pick up one of her dead comrade’s radios and uses it to simply and effectively implicate the surviving agent in a betrayal, telling her superiors that she stole the virus for herself. This isn’t just set dressing but is further evidence of the better than expected writing of the film as well. This isn’t a one-off thing. The bad guys’ capacity to control information and disseminate false intel is treated as much of a threat as Elba’s mysteriously enhanced physical danger.

That all leads nicely into the introduction of our heroes… a carefully constructed split screen intro designed to contrast the characters and crash course anyone who’s not a Fast and Furious aficionado: showing a morning routine, a mission accepted from a contact, and briefly how they complete their missions; Luke Hobbs, portrayed by Dwayne Johnson, is a loud, direct, intelligent mountain of a man, what he lacks in subtlety he makes up for in humanity. Though for all of his kindness, he is not above putting a hurt on someone, such as tattooing a man’s forehead to compel information from him. Deckard Shaw (Jason Statham) on the other hand is more elegant, and subtle. Your traditional spy through and through, deadly and quiet, merciless and unforgiving. Given the same opportunity to squeeze information from someone, he opts to hang a man out of a window, after having killed everyone else in the room in front of him… Hobbs is after a virus, Shaw is after the rogue agent who betrayed her team… both men have CIA contacts, courtesy of Mr. Nobody, a high-level CIA operator from this film’s franchise parent, that put the two men together (again), leading into what is actually a really great dynamic for this kind of film. Two men who already work well together, and are aware of each other’s capabilities and who never question each other’s skills and abilities. They each just plainly don’t like the other, and articulate it well, as this movie plays extremely wisely into both Statham’s oft-forgotten comedic ability and Johnson’s near impossible charisma.

Hobbs & Shaw also plays with the main franchise’s theme of family. In this case, it’s in a more literal sense. The Fast & Furious franchise has always been about the family we make for ourselves, and the importance of family generally, blood-related or otherwise. Hobbs & Shaw accomplishes this theming on two fronts, by focusing on broken families; The virus-infected MI6 agent turns out to be Shaw’s estranged sister Hattie, who, as the sole Shaw who remained on the straight and narrow, despite being inseparable from her older brother as a child. This is used to phenomenal effect in humanizing Deckard, which is good because despite all of the heavy lifting Fate Of The Furious did in redeeming the formerly villainous character, the main franchise will never be able to fully reckon with the fact that, due to a retrospectively unnecessary retcon in the mid-credits sequence of Furious 6, Shaw murdered fan-favorite character Han, no matter how much they would like you to forget that (so sticking him in a disparate but linked franchise actually makes a LOT of sense. A shocking number of people seem unaware this is a F&F spinoff). Hobbs, on the other hand, has his daughter, who he’s long-established to be an amazing father with. As a brief aside, it’s actually a refreshing breath of air to see a character portrayed as an unmitigated badass in the mold of an 80s Schwarzenegger-type stop dead in the middle of an intense interrogation to call his daughter and make sure she’s alright and doing her homework. He’s a badass government agent second and a single father first. He’s uncompromising and unapologetic about that. Early on she discovers a picture of a young Luke and his brother and asks about his mysterious past (which he handles with sweetness, and deference instead of the typical anger), providing a little back story on Hobbs, his estrangement from his own family in Samoa and providing some interesting pathos to an already great character.

To be honest, the only thing in the film that really didn’t work for me all of the time is the humor. There are a few notable cameos from comedians, and although my theater was in stitches, they left me personally flat… particularly one on an airplane that I feel dead stops the pace. I’ll tie this into something I really liked soon, so honestly, maybe take that particular criticism as me personally having an off-kilter sense of humor and broad comedy missing me at the best of times anyway. Now, none of that is to say I didn’t laugh, as I did and reasonably often. Director David Leitch definitely cut his teeth on action-comedy with Deadpool 2 and both sensibilities are in full display here, including his tendency to let actors riff. And riff. And riff and riff and riff. Again, depending on your sense of humor, your mileage may vary. On the note of mileage varying, depending on your patience with this particular brand of high-action, high-concept comic book-y melodrama there is quite a bit in this movie that could very easily come off as corny. It worked for me, but I’m deeply invested, having been a die-hard fan since this franchise was basically Point Break with cars instead of surfing.

Things that were executed especially well here are their course the action, some of which is really breathtaking. I especially thought Brixton’s AI motorcycle lead to some really great chases, as it looked like someone who saw The Dark Knight and decided that 5 minutes of Tumbler motorcycle action was not NEARLY enough. As it turns out, I agree, it wasn’t. Also, I mentioned both the writing and circling back to the airplane cameo earlier, the reason being that there is nothing, not one single moment wasted. Even the most random of cameos comes back in a big way, as if the screenwriter took a creative writing class, learned the principle of Chekhov’s gun and really ran with it. In what should be smaller praise, but in today’s cinema landscape comes off as a damned miracle, this movie both sets up a franchise and tells a complete story in and of itself, and it does this by cribbing James Bond’s most classic move… a mysterious villain cabal. Modernizing properly, they’re the previously mentioned shadowy techno-cult, obsessed with forwarding mankind’s evolution, at the expense of the weak, and they tie-in, as every Fast and Furious villain does anymore, to Shaw’s increasingly convoluted past.

I know I’ve just spent about 1200 words making this sound like a smart movie, and it is, but that’s just the nature of the analysis. This movie truly lives to feel as big and dumb as any other tentpole, and that’s part of what makes it so insidiously clever. You truly feel like you know what you’re in for, Fast and Furious 8.5, but it’s actually more like Mission Impossible 2: But Good This Time. Regardless of anything else though, this really is a pitch-perfect summer blockbuster, clever enough that you don’t ever have to turn your brain off, but bodacious enough that you don’t really have to think about it much either. If you’re inclined, you truly should see this on as big a screen as possible, as soon as possible.