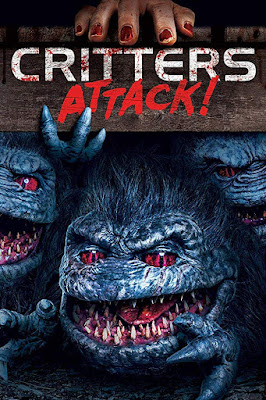 For years, one of the things I clamored for was a revival of the Critters franchise. Growing up with the original two films and being there for the releases of the generally dismissed third and fourth entries, there has been a soft spot in my heart for the series and their strange blend of humor, horror, and science fiction. Imagine my surprise when it was announced that not only were we getting a new limited series called Critters: A New Binge that was going direct to Shudder, but there was also going to be a new film. I was ecstatic. Was this going to be the revival that I had wanted for so long?

I suppose you can call it a revival. There was both a new series and a new film, but, alas, neither are particularly good. For this review though, the focus will be on the new film, Critters Attack!, but make no mistake – both A New Binge and Attack are worse than anything the previous four had to offer. What are the chances that would happen? Pretty fuckin’ good now that both are released.

Initially, the premise of Critters Attack! seems like it will work. The series seems to be going back to basics, portraying a small American town that happens to be the landing site for a rogue set of Crites who proceed to chomp their way through the townsfolk. Although the plotting is certainly predictable to a fault, the basic ingredients of a Critters movie are all present and accounted for. From the kid protagonists to the tonal whiplash, most of the things that fans would be looking will be found in the film. Which, to be honest, is both a blessing and a curse.

Mainly, the issues that arise in Critters Attack! Are related to the execution. The narrative is a slog as it simply meanders through the formulaic blueprint of a Critters film where none of the tonal pieces work. The horror parts aren’t that scary or tense. The humor is mostly off-putting, eye-rolling, or worse - both. Even some of the key pieces of the building blocks feel forced and problematic. The film smartly brings back Dee Wallace, supposedly to reprise the mother from the original Critters, as an Earth-bound bounty hunter of Crites, but she’s essentially a glorified cameo and her character/subplot goes nowhere of any use. The other big choice made by the film is to include a “female” Crite which the main kids find and attempt to save. Don’t try to guess the purpose of it though, it’s as senseless as you would expect. Most of the emotional beats is mishandled, the performances are just as mixed, and the sense of urgency to any part of the plot is non-existent. If there is one thing that the original Critters film were able to produce is charm and that brilliantly carried it through its plot holes or the silliness of its genre blending. Critters Attack! Is absolutely missing all of it. At it’s worst, it feels like a Disney Channel interpretation of a Critters film and there is nothing about that which should excite any fans.

If there is one thing that Critters Attack! has going for it, it’s the practical effects. Say what you will about the rest of the film (or don’t say anything at all if one is to follow Bambi’s mom’s advice) but the choice to use practical effects for the majority of the film is the one great thing about it. Granted, I do think that it must have consumed the majority of the film’s budget, as the rest of the film looks incredibly cheap, but the effects are great and effective. It’s not Chiodo Brothers level of puppetry, but the Crites are fun to watch and the film delivers on what’s expected from them from individual ones with personality to the giant Critter Ball that was made famous in the second film. If memory serves me, I don’t believe they talk in this one which is a bit strange, but overall the effects worked for me.

Although I appreciate that an effort was made to bring the Crites back in 2019, the resulting new film is hardly the reboot the series needed. In fact, it might just be just enough of a misfire to send the franchise underground again for another 20 years. Critters Attack! attempts to find its balance and, in concept, might have pulled it off by its return to the roots mentality and focus on practical effects, but the rest of the execution is completely off the mark. It’s hard to recommend to newbies or old fans. Critters Attack! is worth missing.