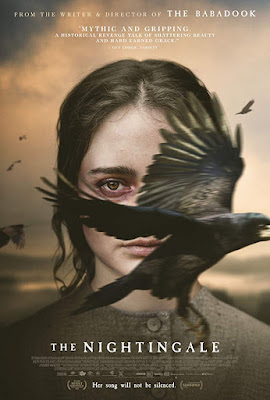 Jennifer Kent set the horror world aflame for a moment in 2014 with The Babadook, a movie that made a children’s book beyond scary and made parenthood seem like the most real horror show in history. In the intervening years, it’s grown into an LGBTQ+ icon movie, and seen a second life in that symbolic way. No matter your take on it, the movie garnered an unusual amount of attention for a small, foreign, indie horror film. In a similar way, I do expect The Nightingale will have an unexpected and far reach, though as the film is less metaphorical and more about our current culture through a mirror darkly, I won’t even guess what that reach will entail. I certainly feel like I know what the intended effect is, and by that measure The Nightingale is an extremely effectively made film. It’s also one that’s impossible to properly talk about without just talking about it, so although I will make every effort to avoid spoiling many specific story beats, it would do the film an equal disservice to completely avoid talking about the themes and message present here.

In The Nightingale, Aisling Franciosi (best known as Lyanna Stark in Game of Thrones) plays Clare, an Irish indentured servant, surviving in Tasmania during the Australian colonization, or more simply, when Australia was a British prison colony. It’s an unfamiliar setting to American audiences but is used to exceptionally clever effect to shine a light on several pressing social issues, none of which are uniquely American, though I am only qualified to present an American view on it. Lieutenant Hawkins (Hunger Games’ Sam Cleflin), the British officer who ostensibly owns Clare, is being evaluated for promotion and a desired post further north. Clare, who we learn has been his servant for over three years, asks him in private to let her go so she can be with her husband and infant child and he responds with violence both in the forms of striking her and sexually assaulting her. Notable here is that the rape scenes in this film are in no way salacious. They’re not revealing, they’re not sexy and they’re not exploitative. They’re just horrible, as it should be if it needs to be at all. This brief interaction does teach us rapidly about Hawkins and what kind of man he is… telling her that she will only be freed when he’s ready. Clare’s husband doesn’t take kindly to the news that she’s been denied her freedom again and vows to speak to Hawkins, sober and calm. When that doesn’t work, he tries drunken and angry, leading him to start a fistfight with the lieutenant. This outburst from one of his charges causes Hawkins to lose his recommendation, leaving him with the only option of riding several days north to put his own name forward before the word of his embarrassment can reach his superiors. The night before he leaves however, he takes his sergeant and ensign to Clare’s shack to express his rage, and things immediately go wrong. Without putting too fine a point on it, she is raped and her husband and infant daughter murdered in front of her. This is handled, cinematically speaking, with as much class and grace as is possible given the scene… and it’s not much. Everything about this movie is bleak and harrowing, but even that description is completely insufficient to express how difficult this scene is to watch, but it’s also vital to the unifying theme of the movie, which I see as a commentary on, frankly, the destructive tendencies of white men and more broadly of colonialism. Colonialism is more specifically explored within the confines of the second main character, the Aboriginal ‘Billy’ played by newcomer Baykali Ganambarr, in an absolute powerhouse debut. Hawkins and his band need a guide to get north fast enough, and although Billy refuses his older Uncle he accepts the job. Clare, full of righteous rage, ends up with Billy, telling him she needs to catch up to the soldiers, and offering all she has as payment.

This sets up an exceptionally interesting character dynamic, because Clare, like all white foreigners in Australia, treats Billy as sub-human. She spends an uncomfortable majority of the film calling him “boy” and much of the film refers to the indigenous people in derogatory ways. Much of the movie is spent on Billy and Clare’s very carefully built relationship with each other. It’s an amazingly well-handled admonishment of colonial race relations.
They end up discovering an amazing number of similarities to each other, and a tenuous friendship is founded in a shared deep hatred of the English, and of Hawkins specifically. An especially heart-wrenching scene in the film comes a little over halfway through when the pair do find a kindly elderly couple willing to offer them a meal. Clare and the older couple are sitting at a table, with fine-looking dishware, while Billy is served in a wooden bowl on the floor, spoon dropped from waist height. The old man breaks taboo and declares that Billy should be allowed to sit at the table as well, and looking downright magnanimous about it. When Billy is seated, however, everyone is stunned to silence when he starts sobbing. And these aren’t the tears of happiness the old man is expecting, and they’re not easy to digest melodramatic tears of self-pity. There is a legitimate, soul-piercing sadness to it. “This was my country. This was MY country,” he wails almost more to himself than anyone.

Another very present theme is one of trauma. Now, as the film’s primary theme is rape and rape culture, trauma seems like an obvious thing, but not in the way this movie uses it. Again, about halfway through the movie, Clare catches up to the first of her three targets, the younger ensign… the one actually guilty of infanticide. Clare isn’t good with her musket and has to slowly, brutally beat the man to death with the stock of the gun, and this isn’t presented with the fun hyper-reality of an average horror. There isn’t even any catharsis to the act, especially as the young man begins to beg for his own mother, and Clare remains haunted by this act for the rest of the movie. Ending another human being’s life, even one that had wronged her, just adds to Clare’s (and by extension, the audiences’) burden. This is not Faster Pussycat Kill, Kill!, and it’s not The Day Of The Woman. There is no satisfaction to be found here, and that is further emphasized by the main theme, as I mentioned before.

Spoilers for the end of the film below.

The aforementioned theme of rape and rape culture is something I’m incredibly unqualified to talk about on almost any level. I can only speak to this film, what I feel its theme is, and what it made me feel. To wit, throughout the film, Clare tries to tell anyone who will listen about what happened to her, in a bid for something akin to justice, and every time she’s soundly ignored. This is an extremely difficult thing to reckon with, almost specifically because is rings so painfully true. This film, frankly, feels less metaphorical, and more allegorical. Holding up a looking glass to you as an audience member, daring you to feel uncomfortable, because all of these three themes are things that directly correlate to modern society. As a matter of fact, if anything, this movie’s cleverest move is being set a little more than a century in the past, because it really shines a light on how very little has changed in any of these regards, and this movie should sicken you because it’s accusing you. Because although Hawkins is an overt villain of the piece, the actual antagonist is the series of societal norms that allow this story to feel so devastatingly plausible, and the film levels it’s accusatory gaze at a society that allows these things to happen, the people whose inaction implicitly condones the behavior, and especially at those who exploit their power to advantage themselves of others’ suffering.

The Nightingale is absolutely an impossible movie to recommend, per se, but technically speaking, the film is beautiful, well shot, with superior performances, writing and direction. It shows the power of an auteur unwilling to comprise about anything, from message to casting, and it’s definitely a powerful and resonating experience, if an exceptionally trying one.