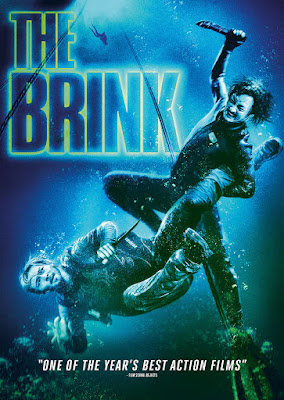 One of the bigger names erupting from Hong Kong in the last handful of years has been Max Zhang. Although he goes by a few iterations of his name, his face and his talent are unmistakable. Earlier this year, his character from Ip Man 3 was spun off in Master Z and before that, smaller roles in films like SPL2 (aka Kill Zone 2), Rise of the Legend, and The Grandmaster solidified him as one of the HK’s next big stars. Fortunately, one of his more recent starring vehicles, the focus of this review, is finally receiving its US debut on Blu Ray and DVD. The Brink is a classic HK story told with modern flair and a choice for drenching its cast and sets in water and balancing brutal action sequences with the tried and true plot of a wild rogue cop on the trail of a gangster. The action is dynamic and entertaining, the performances are delightfully old school, and the choice of setting is inspired. Action fans will not want to miss this martial arts gem.

Part of the appeal of a film like The Brink is the simplicity of the film. Although the plot does occasionally add some layers about gold smuggling via ships off the coast of Hong Kong that can feel a bit loose compared to the crisp action, the overall narrative is relatively simple. A rogue cop is hunting down an outright baddie. There is a bit of a bonus with a kidnapped partner or how our hero is a surrogate father to a young lady in school, but when you boil it down, this is a simple cops vs crooks HK film. It’s when it focuses on these elements that it truly shines.

The Brink’s ability to shine in this manner can be directly related to the cast. As mentioned, Max Zhang has emphatically earned his spot as one of the big-name action stars in HK, even crossing the ocean for a few small roles in American films like Escape Plan 3 or Pacific Rim 2, and it cannot be understated that even as a stoic anti-hero with strong morals that he owns this film. However, director Jonathan Li and the film makers choose very wisely when casting a villain that is meant to be his parallel on the gangster end of the spectrum and Shawn Yue ably brings a horrifying villain to life on screen. For all of the bold choices around their clothing, hairstyles, and dialogue, both of them bring a strangely enigmatic nuance to their performances that opens up the more you watch them. Naturally, they are surrounded by a stellar supporting cast – even Yasuaki Kurata shows up for a glorified cameo, but the two main leads of the film ably deliver layered and highly entertaining performances that lift the basic narrative to that next level.

Of course, with both Max Zhang and Shawn Yue are talented actors in their own right, The Brink also allows them to strut their presence and skills as action stars. The setting of the film is around the docks where a majority of the third act takes place on a couple of boats and it gives the film a unique and waterlogged feel that I’m not sure I’ve really seen in a modern HK actioner. From there, director Jonathan Li loads up the film on some fantastic action set pieces that dig into the streets and waterways of HK. Chases through fish markets, an underwater fight sequence complete with rocketing air tanks, and a finale with a three-way hand to hand fight onboard a ship involved with a gold heist during a hurricane make this film one of the more entertaining releases of the year. Yes. Gold heist fight in a hurricane. That’s a thing. The choreography is well done, it’s shot impressively, and there is a ton of style to boot. For those with a craving for some skull-crushing action, then The Brink will certainly deliver.

When it comes to modern HK action, anything with Max Zhang in it is sure to delight at this point. He has the screen presence, the acting chops, and the action know-how to deliver on all three fronts and all it takes is a film to utilize them. The Brink does so impressively. The plot and narrative might be rather formulaic and easy to consume, but this film does not hesitate to deliver the splashes and flashes of action brilliance that fans will be eager to enjoy. Even if the film was released 2 years ago in China, it’s US release is well worth the wait. Not to mention, there are a few fantastic behind the scenes features on this Blu Ray that dig into why this film works. It comes highly recommended.