The Good, the Bad, the Weird, and the Wild: Dario Argento

To say that Dario Argento is the godfather to much of modern horror cinema is an understatement. Not only does it make an obvious reach for an Italian film joke (see what I did there) but it also limits his influence, as Argento's lush color palette, experimental scores, and surreal scripts laid the groundwork for James Wan's surrealistic grit and Mandy's (Panos Cosmatos) neon-pastel colorscape, along with numerous other modern classics that we don't have time to discuss here. Would this have been better if I had written it at the time of the new Suspiria release? Absolutely. Did I do that? Not at all. You see, I have an embarrassing confession for you, the reader: I only had a cursory understanding of Argento prior to starting this exercise. I considered myself a horror critic but hadn't yet paid homage to the giallo infused blood god that is Argento. When Matt (our EIC) assigned this to me, I had no idea what I was about to get into.

With that said; here are my picks for the directorial review of Dario Argento, master of neon and surrealism. 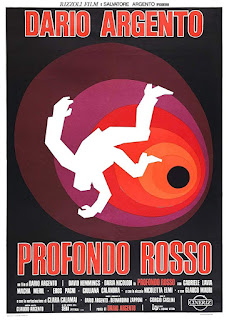 Argento's masterpiece is rightfully listed with the other films on its playbill; but doesn't get the same exposure as it's more popular counterparts. This film deserves a thesis to itself, but I'll highlight a few of the aspects that make this a success, and an Argento style success at that.

Color:
This film is saturated with the aesthetics that defined Argento's work. Color plays an important role in this film (if you couldn't guess by the title) and the palette shifts highlight the tension as Marcus Daly (David Hemmings) follows in the wake of a cold-blooded killer.

Argento uses colors the way that composers use musical themes in films; they can identify characters, motive, and tell the audience how they should feel about what's happening on screen. Paired with a feel that matches the decade, this film is a time capsule-masterpiece that should hold it's place in the horror hall of fame.

Framing and Cinematography:
While brilliant use of color is found in all of Argento's films, none of his other work comes close to the master class in cinematography that's held in Deep Red. The use of spacing, line, and focus create a surrealistic nightmare that is as unsettling as the content itself.
If Argento's color laid the foundation for modern classics such as Mandy and Neon Demon, his use of line and spacing paved the way for Hereditary and Jacob's Ladder. 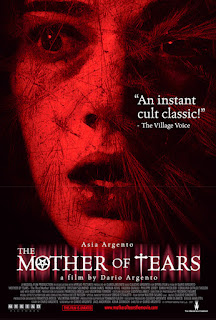 It's painful to see such a wide swing of quality on a directorial review. I know of no other director that has appeared simultaneously in the conversation of best and worst films I've ever seen. Mother of Tears is the finale (suppressed laughter) of the Three Mother's trilogy, finishing what Suspiria and Inferno started 27 years after the last trilogy release. The surrealism that propelled Deep Red to its mastery drowned Mother of Tears, as the slight semblance of a plot is caught in the undertow of purely awful writing.

Mother of Tears is filled with plot holes the size of the abandoned satanic temple it concludes in after wandering aimlessly and violently for just short of two hours. I can't tell if Argento's use of shocking sexual violence and gore is a matter of choice or panic; the only thing that is vaguely alarming without the blood-stained ramblings of the script is the complete lack of continuity.

Mother of Tears is a film so wretchedly awful it will leave any viewer with a modicum of taste crying and doesn't deserve any more discussion than it has already gotten in this review. 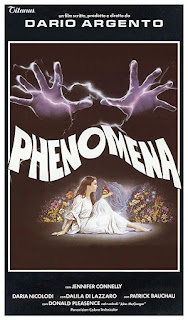 Trying to find one candidate out of all of Argento's films that is the oddest is a challenging feat. From the most bizarre stabbing scene in cinema history from Four Flies on Grey Velvet to the dizzying but enjoyable plot of Tenebrae, there is no shortage of picks for what could classify as "weird." Phenomena focuses on Jennifer Corvino (Jennifer Connelly), a student attending a Swiss boarding school where she realizes her tremendous influence over insects. This plot has non-sequiturs, puzzling characters, and more monkey violence than most films I've seen, but that's not the reason why it's my pick for Argento's weirdest film.
Most supernatural powers are existential in their own right - Magneto can control magnetism because, well he just can. The same goes for Superman being from Krypton. Argento, never one to leave things to the imagination, explicitly states that Jennifer's ability to control the insects comes from their insatiable desire to mate with her. You read that correctly. The bugs only do what she wants them to because they want some Swiss school girl action. Aren't you glad that Spider-Man didn't follow the same route? 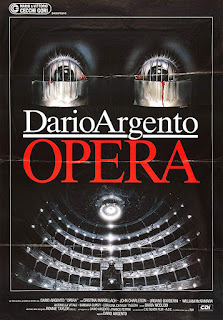 Many of Argento's fans (myself included) like to pretend that Opera was the last film that Argento ever made. It would have been better off this way, as nothing that followed Opera came close to its quality or entertainment value. I know that Deep Red is a better film, but I was tempted to put Opera as his best simply because it is a wonderful departure from his signature style. Robed in black and gothic themes, Opera uses the surrealism, visual disorientation, and heart-stopping homicide to full advantage in this second-place feature. What sets this apart as wild from the admittedly rambunctious titles of his career is the masterful use of perspective and angles, coupled with a surprising number of crows. Watch to find out more.

This has been a cursory overview of Dario Argento's filmography, highlighting the best, worst, weirdest, and wildest selections from a broad and successful, albeit varied, career. I can't endorse his high-quality titles enough, and the poor titles are worth watching for the more serious student of film.

Except for Mother of Tears. Leave that one alone.

Written By Alex Gerrish
Posted by DarkReif
Email ThisBlogThis!Share to TwitterShare to FacebookShare to Pinterest
Labels: Dario Argento, Giallo, Horror, Suspense / Thriller, The Good The Bad The Weird The Wild