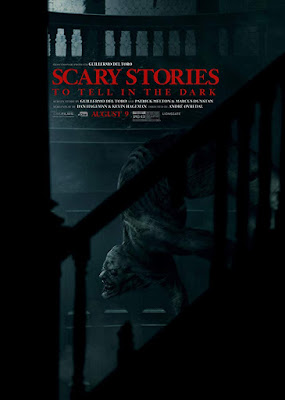 I was quite hyped for this one. The source material for Scary Stories to Tell in the Dark was a cornerstone of my horror media upbringing, del Toro is sitting in the producer's chair, and director André Øvredal has proven to be something of a master in genre cinema with back to back classics in Troll Hunter and The Autopsy of Jane Doe. Naturally, that means it's bound to be generally underwhelming based on expectations versus the actual execution of the film. Even with that, the film ends up being a highly entertaining time for both kids and adults. It never quite finds the right balance, but strong set pieces and efficient pacing make it a solid fall film.

Scary Stories to Tell in the Dark is, however, quite the enjoyable kid's horror film, inspired by the blend of child-friendly basic storytelling and stylish horror set-pieces based on the books with a hint of the iconic artwork that set aside the source material. At times, the film tries too hard to ride the line between a youth and adult film and a few moments in the film had me wondering why they didn't lean further both directions when needed. The overall Halloween and fall atmosphere is solid, as is the use of the 1968 setting to give it a slight fairy tale/fantasy vibe that I was genuinely impressed by. The overall plot feels pretty generic, obviously showing a love for 80s kid genre films like Monster Squad or The Goonies at times and the story that threads the set-pieces together is a tad too hollow - despite a great anchoring performance by Zoe Colletti and a surprisingly bold choice to parallel the events with layers about Vietnam and Richard Nixon.

The reason someone will want to see Scary Stories to Tell in the Dark, particularly in theaters, is for those horror set-pieces which are delightfully stylish, tense, and fun. Øvredal channels a bit of Sam Raimi here with key moments including a stew slurping sequence and the red soaked surrealism of the Pale Faced Woman in a hallway, but each of the "stories" has its own feel that sets them apart from the rest which works. The film never tries to just jump scare its audience, but instead builds some great tension before unleashing its monsters on the kids racing against time to solve the usual ghost story mystery. Øvredal knows how to build a strong horror sequence with atmosphere and set up (if you've seen Jane Doe - you already know this) and he gets to still utilize that even in a kid's film.

Had the basic foundational narrative and plot been stronger and not so heavily reliant on overused tropes, Scary Stories might have lived up to the immense creative forces that were assembling for it. Still, the 10-year-old in me delighted in seeing some of my favorite tales up on the silver screen and when the film needs to succeed - it does so with a sly wink and well-crafted moment.