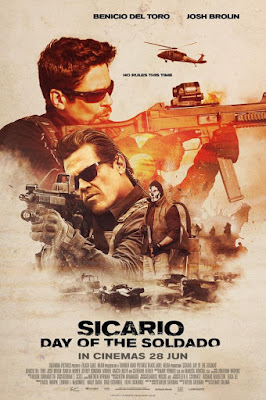 There were a lot of mixed feelings to be had about Sicario: Day of the Soldado even before the film was released. Particularly since the first film was, at least in my opinion, a tour de force as an artistic and nihilistic thriller about the inherent issues with the system in regards to America’s role at the southern border. It was not a film that begged to be franchised, but the fascinating characters it painted certainly did leave plenty of morally gray areas to be explored in further stories. After years of rewrites and announcements (originally both Emily Blunt and director Denis Villeneuve were announced for the film, but would drop off later on) we are left with an ‘interesting’ second entry into this surprise series. An obvious step down in execution – in essentially all areas – from its predecessor, Day of the Soldado still manages to craft an interesting and vicious film that tries desperately to take the series in something of a new direction while maintaining the style that made Sicario such a critical (and surprise box office) success. It’s a flawed film ultimately, but one that will solidify this franchise for further entries.

Narratively speaking, Day of the Soldado does come across as a much more straightforward thriller than its predecessor. Since the roles and goals of both Josh Brolin’s Matt and Benicio del Toro’s Alejandro have been revealed by the ending of the first film, this film must instead try to give them the main character arcs since there is no longer a link to the audience that Blunt’s character portrayed previously. Being thrust into the middle of this world of egos, violence, and political battles that exist between the laws makes the film generally feel a bit darker and heavier, but it does suffer from not having the grounding that Blunt brought around before. Here, we are supposed to instead find some redemption in either of the two leads which can be problematic since their established characters are very hard to necessarily relate with by the time that this film starts. It’s ambitious, to try and give them more humanity (it works better for Alejandro than it does for Matt by the third act), but perhaps too ambitious since it doesn’t give the film quite enough time to develop their chemistry with other characters to allow it to happen. Alejandro gets to connect a bit with a kidnapped young girl, perhaps the best part of the film is their trek to the border through the second act, and Matt gets to do battle with a government that refuses to stand by any of its decisions (some sly political satire seeps through, although not nearly enough considering the plotting), but the film spreads itself too thin to truly be effective with either character in a way that resonates above and beyond the plot.

Fortunately, Day of the Soldado does have some decent execution. Granted, it’s not the all-star crew that delivered the goods with its predecessor. Nonetheless, Italian director Stefano Sollima (mostly known for his work on the phenomenal television series Gomorrah) holds his own in the director’s chair and strong performances from all of the cast help the film overcome its speedbumps in the narrative that tend to occasionally derail the film. Day of the Soldado doesn’t quite have the sense of tension and existential dread of the unknown that the first one accomplished and many of the action set pieces do feel a bit more traditional because of that approach. A sequence in the third act where Alejandro is being interrogated on a bus could have been the white-knuckle moment of the year, but instead it’s just a solid sequence. When one keeps comparing this one to the first one though, it’s hard not to feel a tad disappointed on some level.

Truthfully, there are a lot of times during the film that it felt like perhaps there was a lot more studio interference to create the Sicario sequel THEY wanted then the one that would have been more natural and effective in continuing the story and tone that was developed. The manner how the film neatly ties together in the third act, for example, seemingly feels out of place compared to the rest of the film and how it attempts to undercut itself. It works, but not as well as it might have. That last sentence might be the slogan for the film in general. Every time it finds a moment that stands out, moments that even seemingly come across as Sam Peckinpah inspired in their balance of humanity and violence, the film pulls away from it to return to the more traditional thriller pathway. There is so much potential and Day of the Soldado only capitalizes on it in moments.

Reading back through this review before I do my recap, it really sounds like perhaps Sicario: Day of the Soldado is a failure of the film. Let’s be clear: it’s not a bad film. It’s just very hard not to be disappointed when someone is comparing it to the brilliant original. It’s a decently executed thriller, strengthened by some impressive performances – del Toro feels natural in this role, and it moves at an effective enough pace to be highly entertaining as that ultra-violent and gritty film. In the end though, the film doesn’t have that artistic edge needed to lift up the script above its 70s thriller inspired roots. It never digs into its political or social stances (despite moments in the second act that attempt to rectify some of its buzz word concepts the power the plot) and it feels almost too easy to consume at times as it never goes as dark or thoughtful as it might have – which is odd to think about. Fans of the original may find moments to enjoy and those looking for that film to kick forward the franchise will find an entertaining entry, but  Day of the Soldado seems more like a spin-off than a true sequel.

Written By Matt Reifschneider
Posted by DarkReif at 9:20 PM