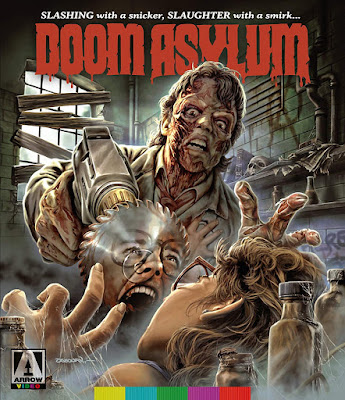 There are some films that take another genre and then embed horror within it. It can be very effective that way and it embraces that wolf in sheep’s clothing kind of cinematic element that can work impressively. Doom Asylum is not like that at all. In fact, it’s probably not too out there to claim it as a sheep in wolf’s clothing. On the outside, Doom Asylum looks like it just might be one of those genuine old school and off beat slasher gems that Arrow Video is known for putting out (see The Mutilator, The Slayer, and Blood Rage all come to mind.) It’s not. On the surface, it’s a slasher and hits all of the elements of the blueprint. In execution though, the film is more akin to a slasher spoof than anything else. It’s meant to be a comedy, naturally, but that doesn’t mean it can even do that well. To its benefit, the film is one that can be seen as a ‘so bad, it’s good’ piece of cult cinema, but even then, Doom Asylum can be a chore to work through.

The film starts off with as ten years ago, a big-time lawyer and his mistress find themselves on the short end of luck and the bad end of a car crash that leaves them both dead as doornails. Just as the coroners are intending to do an autopsy on the lawyer – gasp! – our villain of the film comes alive! Skip to ten years in the future and a group of young people (Teens? 20-somethings?) and an electronica female punk band end up at the titular abandoned asylum/hospital and our decaying slasher killer shows up to drop one liners, kill some people, and pine for his lost girl.

Doom Asylum feels like the filmmakers read a Madlibs version of the most generic slasher film and just jammed in whatever came to mind to make a horror film as a joke. The problem is that, just like Madlibs, most of the choices don’t really make sense to create any kind of theme or threaded sense of direction. It really does feel random. It feels random and without purpose. Even when it comes to the low brow end of slashers, this is very problematic. Characters are caricatures of “funny” stereotypes (read: not funny) and the film has no over-arching reason to exist narratively. No reasons for the villain to do his murderous thing, no reason for the kids to be where they are, and certainly no reason for the audience to really care about anything in the film in terms of story. Even comedic films need to have some sort of foundation to build the humor on and this weak kneed version of a slasher is not the kind of basis to execute that idea.

Beyond its hollow story and generic going-through-the-motions approach to narrative, Doom Asylum struggles to execute anything even when it’s obviously meant to be tongue-in-cheek and bad. Strangely enough, it’s not even fun in that Troma-esque manner of nonsense for the sake of nonsense kind of bad horror comedy. This film just struggles to find any kind of cohesion at all. The performances range from strangely fun to boring, the kill sequences occasionally spark an enjoyable slasher moment only to be ruined by a one-liner that is delivered with little pizzazz, and the use of the abandoned asylum seems like there was once the fun idea of it being a confusing maze, but it’s never utilized in that manner. Granted, it’s obvious that this film is meant to be humorous, thanks to some awkward moments, strange jump cuts, and the overall brightly lit and wink-wink attitude of the whole thing, but even then, the jokes generally fall flat, the key comedic moments are uninspired, and the whole experience is stagnant.

Doom Asylum is a film that desperately tries very, very hard to be funny with its slasher tropes, but ultimately feels uninspired and tests an audience’s patience. Arrow Video has once again gone well above and beyond what this film deserves with brand new commentaries and interviews to go along with its new 2K restoration from the original film negative (list of special features included below) so for those who already declare themselves fans or perhaps those who do like really, really bad movies, the release is worthy of a purchase thanks to work of this iconic label. In all honesty, I found the interviews and commentaries to be far more entertaining than the film itself, which is a credit to the release. Doom Asylum, as a film, is a love it or hate it kind of affair and as much as I love a great Z-grade horror slasher to burn an hour and a half of my night, even this one tends to grind my gears.

If you’re a fan of Troma films or those insanely tongue-in-cheek horror comedies like Microwave Massacre, then I suggest giving it a go. 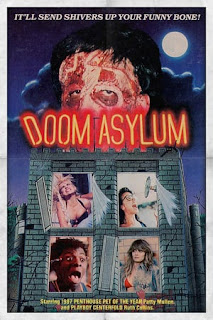