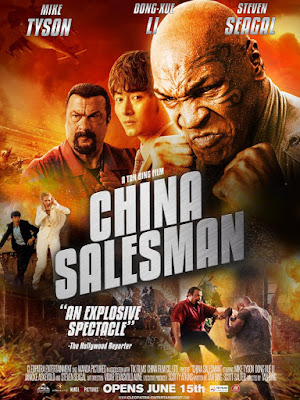 When China Salesman was first announced there was a lot of hype around the film. It was a Chinese film, but it would feature both Mike Tyson and Steven Seagal. They were also going to have a fight. Cause, why the hell not? As a person who grew up watching Tyson fight in the ring and Seagal flip people haphazardly on the silver screen, I was immediately intrigued. There was almost no chance that this film would be good, particularly when the synopsis was revealed and the big appeal to western audiences would be this battle of larger than life personalities. When the opportunity came to review this film, I leapt at it knowing full well that China Salesman would not be a great film. Nay, it wasn’t even going to be a good film. If it was a film at all, I was going to be pleasantly surprised.

Surprise, surprise, China Salesman is a film, but it is very terrible.

Don’t let that deter you though, dear readers of this site, for calling a film terrible doesn’t mean all things are dire straits. For everything that this film completely misses the mark on, it does succeed in spades at being that terrible film. The unintentional humor that arises from its failures at trying to be some kind of worldly thriller, mixed with poorly developed messages, and a streak of jingoistic tendencies that makes Wolf Warrior 2 pale in comparison, allow China Salesman to be massively entertaining. It’s bad, but it is hilariously bad.

The film centers around the titular character, Yan Jian, as he attempts to take his business skills to the table and win a bid for a telecommunications contract in an African country all the while battling against racism, corrupt businesses, and other partners who have no belief in him. Did I mention this was an action movie? One where Mike Tyson drives a tank around and Seagal owns a bar with belly dancers? As you can imagine, China Salesman struggles to find any kind of balance to what it is trying to convey in terms of tone. One second it’s a business thriller, the next our protagonist is climbing radio towers and using the Chinese flag to signal safe passage during a full out warzone gun battle. The use of jingoist tendencies runs rampant in the film and it does deter from the narrative flow as it quite obviously bashes its audience over the head with it in some of the cheesiest ways possible. This makes some of the 80s action films of Hollywood look like child’s play with its aggressive nationalism.

The big appeal to most western audiences, the previously mentioned on screen fight between Tyson and Seagal happens in the opening sequence. Not to spoil too many things, but it’s in the first 15 minutes of the runtime. This did not spell good things for the rest of the film as it doesn’t take any time to build to it and it uses it more as a character build, mostly for Tyson’s villain role for the film, instead of a culmination of their roles. It inherently feels tacked on and, despite being gloriously over the top and ending a spectacularly bad one-liner, doesn’t really add much to the film narrative.

Still, despite the massive flaws to its narrative, the awkward use of English as the primary language, and Mike Tyson dubbing himself for most of his lines (?), I will admit that I was having fun with the film. It’s just so oblivious in how hammy and awkward everything is and presents it in such a way that every five seconds the film is generating laughter with the lengths it goes to in trying NOT to be bad. The results are highly entertaining.

The score crafted below reflects how the film should be seen on a critical level, but for those with the right mindset, China Salesman might be worth the purchase simply for how outlandish it is as a film. True, the Tyson and Seagal slant helps, but it’s a minor portion of the film and the rest is a mashed potato salad of awkward. Keep the right mindset, you might find some unintentional enjoyment out of it. For the rest, you might want to give it a skip.

Written By Matt Reifschneider
Posted by DarkReif at 7:46 PM