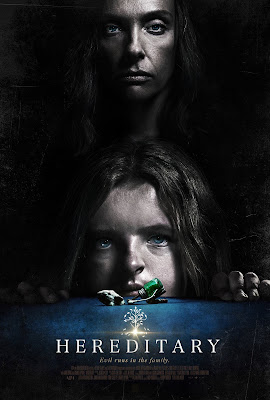 The A24 phenomenon is something truly interesting to behold as a horror fan. The most recent wave of success in the genre is certainly not limited to the surprise success of A24 in generating arthouse horror films, but it is definitely a part of it. After The Witch came out to critical (and box office) success, the studio decided to roll with the punches and embrace their new found fame as an arthouse horror company - even if they release more films than just genre work. Fast forward to 2018 and A24 is releasing one of the most hyped horror films of the year, Hereditary. Fascinatingly so, this film is one that was garnering a lot of mainstream talk and not just from the usual horror outlets. This was a film that generated quite the buzz on the film festival circuit and everyone was talking about it. This is potentially disastrous though. A film like Hereditary, with its more meticulous approach to the genre, tends to create an intense divide in its viewers. It’s either the best film of the year (critics are raving) or it’s the worst film of the year (currently sitting at a D+ on CinemaScore) and there is very little in between. For this horror aficionado, Hereditary rests on the former end as one of the best of the year that’s brimming with some of the most intense performances and unnerving sequences that horror is likely to produce by the end of the calendar year. It’s truly effective and horrific cinema, boiling with dramatic heft. It’s a film that is not to be missed.

One of the better aspects of Hereditary is that, outside of a handful of moments - including a key one that arrives around the 30-minute mark that will forever be known as that scene, is that the film is not intent on simply scaring its audience. Scares are easy. Loud noise, sudden visuals, and a decent build will make a film scary. What Hereditary does is it makes the film unnerving and emotionally heavy. It’s a double combination that really makes an impact on its audience (good or bad, you be the judge) and only attempts to throw in a few jump scares towards the finale - which does go off the rails in comparison to the rest in terms of traditional fearful frights and supernatural moments.

The reason that Hereditary is able to craft a film that’s emotionally effective and generally unnerving is that it retains a more dramatic core that’s, for the most part, relatable to the audience. As much as one wants Hereditary to be solely about the more horrific or supernatural elements of the genre, which it does utilize more and more as the narrative unravels, the film is about the broken dynamic of a family that is dissolving in the wake of a tragedy, in this case the death of a grandparent. As it goes, it does reveal that there are flaws to the family dynamic that come boiling to the surface under this tension and emotional strain that this event has placed on them. This focus on the human condition, their sometimes illogical reactions to things, overcorrecting in the face of a derailing dissolution of communication, is the heart of why the narrative in Hereditary works and is the reason this film lifts itself up above and beyond.

From there, it’s the brilliant execution of the film that finishes off the smart approach to the rather generic horror elements that arise within the narrative. Director Ari Aster brings a strong sense of visual flair to the floor and gives a fantastic foundation for the impressive cast to embed their own emotional style into the characters. It cannot be said enough that Toni Collette delivers a ballsy and sky shattering performance. Sure, she is borderline manic for a majority of the film, but the shades of humanity that she layers into what could have been a one note performance is impressive. The same goes for the entirety of the cast and the subtle characterizations and chemistry that they share and displays of tension that Aster allows to be shown on screen further emphasizes that the human tragedy on display is just as terrifying as the eventual arrival of the supernatural horror that begins to root itself in the film.

Hereditary is not a film for everyone, particularly since the film does do some unique things with its narrative pacing that can leave those with the wrong expectations either bored at the slow burn process of the first act or baffled by the broad and bold horror choices of the third act. For those that go in expecting a horror film that actually develops layers, characters that are more human than slaughter fodder, and takes chances with its story, then this is definitely one of the best of the year. Hereditary is not just a film about a family surviving a supernatural horror, but it’s one about a family surviving itself as a supernatural horror pushes them further. Here’s to hoping that A24 continues to craft and release such strong films for the genre in the future. Until then, Hereditary remains one of their best.