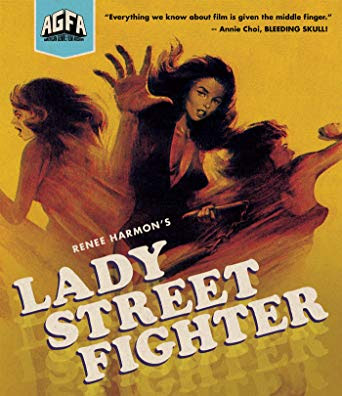 When one things back to the 1970s, in the realm of low budget flicks, there are a variety of exploitation genres that come to mind and there are quite a few instant classics that rise above the midline to be classics in their own right. Then there is Lady Street Fighter. Yes, Lady Street Fighter. If there were ever a more obvious film that uses exploitation to appease fans, then I’m not sure what that film would be. Lady Street Fighter uses the subtlety of a 2 x 4 beating its audience in the face. It is truly the kind of film that only a very special kind of cinema fan would enjoy – probably the kind that reads our material, truthfully. Lady Street Fighter is silly, poorly crafted, cliché, spends way too much time on sequences that really don’t matter, and in the end feels more like a comedy than an actual action film. Oh, and did I mention, even though the film feels like a 70s exploitations film, it was actually released in 1981. It very much missed out on being part of that boom and was more of a reaction to it.

Let’s be honest, if you’re looking to purchase the new 2K remastered Blu Ray from AGFA, then you already know that this film is for you and will definitely be worth the purchase. If you have qualms with a film that’s so ridiculously awful that it’s hilarious, then you may want to skip out on this one.

In terms of low budget action, Lady Street Fighter is scraping by on the bottom of the barrel, which to be fair, does add a lot to the senile enjoyment of the film. There’s a lot of ambitiousness to be had in the set pieces, including a couple of car chases, a rooftop scamper, and some seriously larger explosions. When it comes to action, the film attempts to keep up with the other exploitation films and the thin plot gives the characters plenty of reasons to battle it out – including introducing a hired killer organization called Assassins Inc (oh yes, that’s the name). The film attempts to make them exciting and keep up the momentum with some edits to cover up the budgetary constraints, but often it feels just like what it is, covering up their inability to showcase the real action. It does make it more entertaining in a Z-grade film manner, so there’s that.

Even beyond that, this film is just bad. The acting is terrible, half of the time it feels unnecessarily dubbed, and the script – or whatever concoction they slapped together – is hilariously choppy and thinly guised as something more than just a series of plot progressions strapped into a haphazard narrative. There are moments where the film takes entire detours from the main plot for the sake of ‘character building’ that’s little more than just getting our heroine into suggestive clothing and having male characters make some of the worst pick up lines at her. There is a murder mystery party that spends far too much time showing the audience the crowd and there are multiple sequences added into the film just for the sake of getting a woman topless on screen. None of which is all that relevant, but certainly exploitative. Again, hilarious in a Z-grade film manner. Keep that in mind.

Despite the fact that Lady Street Fighter is a terribly made film, AGFA is dedicated to preserving just these kinds of films and it has received a home release that is one hundred times better than the film itself. The new 2K restoration looks impressive, considering the source material’s original condition (compare stills to previous releases, for example) and the film comes with a commentary track. As if not to outdo themselves, the film also comes with an entire second film, Revenge of Lady Street Fighter (which is teased at the end credits) which was never released, to my knowledge, and that is also a new 2K scan. Fans of this film will definitely want this release. I mean, two movies for the price of one? Why the hell not?

Lady Street Fighter is hardly a good film, in fact, it’s barely a film as much as a series of outlandish sequences meant to bank on exploitation trends. Still, the film has a dedicated fan base and for those willing to overlook it’s many, many flaws, and Lady Street Fighter can be quite enjoyable in that ‘so bad, it’s bad, but maybe good too since I’m laughing so much’ kind of way. I certainly laughed my way through most of the film. Go in with tempered expectations, prepare to accept it for whatever the hell it is, and enjoy Lady Street Fighter by picking up this great release.

Written By Matt Reifschneider
Posted by DarkReif at 11:34 AM