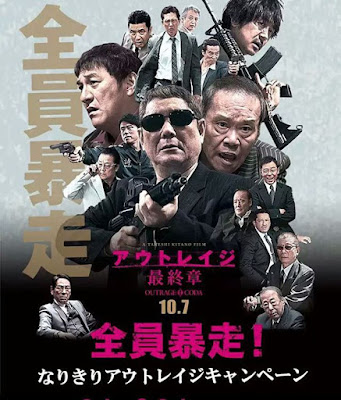 While it would seem that Takeshi Kitano’s return to the yakuza genre with his Outrage films has met mixed reaction from fans, since the release of Outrage in 2010, I have been quite the fan. Each of the previous two films, the second one being Outrage Beyond, has seen Kitano blend a fantastic homage to 70s exploitative yakuza films with that of a modern sense of uplifted artistry. He does it with a refined sense of drama and pitch-black humor. When it was finally announced that a third entry would seal off his trilogy of films, I couldn’t have been happier. To make matters even better, Outrage Coda is another impressive addition to the series that sees its protagonist Otomo, played once again by director Kitano, who is again pulled back into the sleazy world of the businessmen yakuza. This third entry retains the same qualities as the first two and finishes off the trilogy in the only way that it could possibly end with strong execution and a sense of self awareness.

What I have always found fascinating about these films, and Outrage Coda hammers it down once again with a concussive gun shot, is how these films feel like the perfect modernization of the classic Kinji Fukasaku yakuza films from the 1970s, particularly those from the Battles Without Honor and Humanity series. The core foundational elements remain the same as the audience finds themselves thrust into the middle of building tensions between rival yakuza groups where our non-hero Otomo once again acts as a catalyst to a narrative that eventually erupts into plenty of shocking twists and violent turns. Like the previous two entries, Coda is a film that is built with dynamic ensemble work, perfectly cast to make characters immediately recognizable by their small traits since they all essentially exist as older Japanese men in muted shades of grey or black suits. For action fans, Coda may come off as a tad boring since most of the film is spent in rooms with characters plotting against one another or changing the narrative to try and best fit their needs. The film builds and builds within that narrative to get all of the characters at their breaking point and Kitano does an admirable job at keeping the pacing while doing so. The intensity of the film that’s punctuated by the sequences of insanely violent action is the key to understanding some of the main themes of the characters. Don’t let the elongated character and plot building of the first and second acts trick you, they are just part of how the film ignites the fuse.

This is where Kitano allows his directorial style to elevate the material. Seeing a bunch of yakuza gangsters plot and execute is hardly anything new, but his sense of minimalism in style in the film actually helps the audience along. The score is this kind of low-key percussive underlining to Coda, the performances are nuanced and subtle for most of the film, and his ability to keep the momentum of the film while it seemingly sets up all of the pieces is impressive. It can take a bit too long in certain scenes and there is a slew of secondary characters that pop in with little back story or pop out with little to tie off that can be frustrating at times, but it ultimately works. The film could have easily been a snore-fest, but Kitano handles the material with an intentioned finesse that works for it and handles the material with a strange honesty and effective nod to the horrific humor of the characters and events. In this regard, the film accomplishes its task.

Perhaps the largest issues that Coda has to deal with is that the film doesn’t quite feel like the finale to a trilogy that goes with making that claim. It certainly ties up some loose ends of various characters and organizations that have come to the table over the last two films, but Coda feels less like a finale and more like one more chapter in the series. Coda does have a few surprises up its sleeves for the third act (those I will not spoil, although it does take some intriguing spins) and yet as the credits rolled the tone of the film was not that the story was done, but that it was simply one more piece of the puzzle. Granted, there’s a large part of how Kitano makes films that would indicate that this was the intent, particularly in how he likes to pull expectations and defy them, but for expectations for some kind of grand gesture or finale, this film does not adhere to that and for me it left a tone that was a little flat.

In the end though, Outrage Coda is another very entertaining and solidly built entry into Kitano’s throwback yakuza series. The film is built on effective dramatic weight, the build and release of the narrative works to maximum impact, and it features some impressive execution of its minimalist style that benefits the material and slew of disgusting characters. Fans of the previous two will definitely want to finish off the trilogy (hopefully it gets a full US release sooner rather than later) even if it leaves a few too many threads and aspects open to truly close it out.