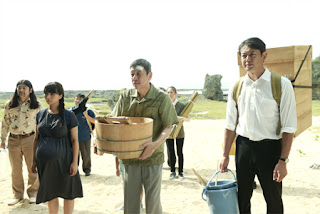 “Is this really Japan?”
“On paper at least.”

A strong majority of films deal with death in some regards. Whether it’s the absurd body count of action and horror films or how death represents such a strong dramatic shift for other genres, it’s a topic that often comes up in one way or another. Perhaps it’s not so unusual that the first two films I would see for Japan Cuts 2018 start off with a funeral sequence. However, Born Bone Born is not nearly as heavy of a cinematic experience as Blank 13 and instead opts for a more comedic slant to the familial drama that populates the dramatic cinema landscape. To its benefit, Born Bone Born features some solid performances, an intriguing balance between tone, and a fantastic sense of purpose and drive that keeps the audience hooked.

Initially, the premise of Born Bone Born seems to be a bit too by the numbers as it introduces the family in the wake of mourning the mother who has passed away. It introduces us to a variety of family members and after an initially humorous opening (odd as it is that it takes place at a funeral on a small island in Japan) it proceeds to jump forward four years as the family comes back together to perform a secondary ritual to complete the closure for her death. It’s at this point that the film starts to add in some interesting elements to the usual dramatic fair.

Naturally, each member of the family has some problems that they bring to the table, including alcoholism, a surprise pregnancy, and the usual family disfunctions that tend to be the crux of these kinds of films. The manner that the film builds to the second ritual in the third act is what does carry a lot of the film’s momentum. The audience is never really sure what that ritual is or what it will look like as hints are given through some of the small banter and character interactions. It helps immensely as a new character is added in the second act to be a liaison for the audience to learn about this small rural island, the family dynamics, and the idiosyncrasies of their lives. Even then, the film occasionally falls into the trappings of being a predictable story that hammers down on the usual dramatic beats in terms of dramedy.


Fortunately, even when Born Bone Born is running too predictable, the execution is well done. Director Toshiyuki Teruya knows how to really make the heart and humor fluctuate in balance with one another and the one-liners that might pop up in a heavily dramatic moment or the thoughtfulness to the character chemistry in the silly banter that arises feels natural in most sequences. The greatest sin that a film can ever commit is to be boring and that is something that the nuanced performances and strong sense of timing from the director never allows. The film might have trimmed a few moments here and there to cut down its almost 2-hour runtime and there are moments where the thematic message hammers down onto the audience (including the voice over at the very end that blatantly spells everything out), but ultimately the film has a strong sense of what it wants to be and delivers on that premise.

For those looking for a film that delivers on some great jokes and has a lot of heart behind the usual dramatic familial interactions, you can’t go wrong with Born Bone Born. The film has some great chemistry and balance of tone is impeccable. Even when the film meanders down roads of being predicable or a little too long for its material, it sells it with a heart of gold.