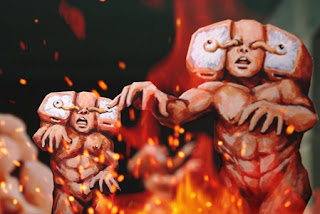 Exploding with destructive force alongside the ecstatic birth of visual kei, Psychedelic Violence Crime of Visual Shock quickly became a slogan associated with the extravagant and wild aesthetic of pioneers X Japan (named X until ’93). Their frenzied speed metal antics and legendary live performances would radically alter the Japanese independent music scene for decades to come. Hurtling out of nowhere like the band’s debut album Vanishing Vision, artist Ujicha’s grappling Geki-mation took the festival circuit by storm with his brutal and bizarre The Burning Buddha Man in 2013. Brandishing his paper cut-out trademark once again, and erupting in grizzly and mind-bending fashion, Uchija’s triumphant long-awaited return is heralded with the eye-popping Violence Voyager; the reins on his inventive style are off and reduced to rubble, committing all new crimes of visual shock.

School’s out and friends Bobby and Akkun make plans to build a summer hideout deep in the mountains whilst also seeking to reconnect with their friend Takaaki. Their journey takes a sudden turn when they stumble upon a seemingly abandoned theme park named Violence Voyager run by Koike, where humans are tasked with fending off an alien invasion. Quickly into their run of the park they uncover they are being watched and discover the sinister undertones lurking within the shadows of The Haunted Zone. Gripped by fear they realise there is more to the alien robots behind the park’s premise. Are they human, or are they something more monstrous? And how does Koike fit in with all this? As the two boys plunge into these secrets behind Violence Voyager, they become embroiled in an ultimate fight to the death against The White Robot.

To give away any more of the story would be to deal a life-ending blow to the twists and turns Ujicha’s sophomore effort is riddled with, of which there are plenty. But straddling the very fine lines of sci-fi, body horror, and teen flick it is a story that successfully disintegrates genre formalities into a molten pool of slurry, fed into a maniacal cult machine, and drained into a radioactive mould reanimating it to wreak havoc on the masses. Rooted in the more fantastical realm of pulp sci-fi, Violence Voyager’s bombastic technological pursuit verges on the insane with an unrelenting disregard for the human form; with disturbing consequences the Men Behind the Sun-esque experiments on the park’s unsuspecting guests contort and mutilate their humanity beyond comprehension. It’s a gothic posthuman story told throughout the ages, that of crazed science losing its grip on sanity, yet is not obliged to ask the big questions previous films of this ilk have posed, effectively stripped back to the genre’s more enjoyable and outlandish qualities.

There is a domineering ‘80s vibe submerged deep within the film’s vivid exterior. Respectful nods to the likes of Tetsuo: The Iron Man, Akira, and Cronenbergian body horror pulse from its paper heart while the plot devices, narrative structure and even its occasional 8-bit soundtrack would feel at home in the cinema of that particular decade. These throwbacks are subtly reinforced along the eighty-five minute runtime but their clever integration into the story does not render the film simply as a nostalgia trip into cult B-movie terrain, refusing to assault its audience with the blunt force trauma used by other film and television projects as of late. It retains its vigorously fresh appeal whilst never caving in to kitsch or novelty territory.

Violence Voyager is far more stylistic than substantial, and without its hypnotic and nightmarish geki-mation it would just be another throwback flick. Its freakishly delightful visuals play out like some Ludovico test: no matter the story deployed by Ujicha it renders the viewer helpless to resist taking their eyes of it for a split second. It pulls, dragging you down into its otherworldly domain and leaves you there to fend for yourself. Its sets are meticulously crafted and its effects gleefully violent and puerile (watching paper children vomit and melt is a spectacle nobody would believe they needed until now) but the show is stolen by the grotesque mutations birthed by the debauched experiments tastily throwing back to the days of Frankenstein; their design is one which lingers on in the mind long after the credits roll. Comfortably interwoven in the visual eccentricities is a dark yet amusing sense of humour that ordinarily wouldn’t work in context – this, thankfully, is no ordinary film.

Bathing in a tantalising dish of human soup this is a visual feast for the senses, a gruesome display of art pummelling every other cinematic function into submission. Its familiarity is as boundless as its cosmic imagination, plunging into the depths of some unspeakable evil and emerging as the demented spawn of science and technology. Though its voice-acting did not receive the attention it so demanded, Violence Voyager remains a charismatic adventure overflowing with youthful exuberance. Not as pioneering as those who coined the phrase, the crimes of visual shock run rampant and leave us craving for more.