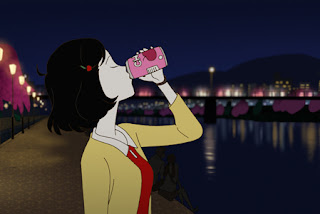 One of the great things about a film festival is that a person is able to see a lot of films that they may not have been intent on seeing previously. For me, this is the case for the animated and fantasy focused romantic comedy, Night Is Short, Walk on Girl. As someone who is only just starting to get into the realms of anime and one that is not all that keen on romantic comedies, this was a film that I was hesitant to simply leap into without much warning. However, a brief search of the film online sold me that it was worth the chance. The film had already opened in Japan to success, received some accolades like the Animation of the Year at the Japan Academy Prize, and it is already slated for a select US theatrical release. Naturally, this perks my interest. Even then, Walk Is Short, Walk on Girl was not quite the film I expected. Instead of a straight forward take on any of its genres, it exists as a strange vortex of exaggeration of the elements, tonally, visually, and in narrative. It’s quirky as hell and is often as perplexing as it is engaging with its story, but Walk Is Short, Walk on Girl is also impressively confident with the material which makes it one of the most intriguing and dynamic cinematic experiences this year.

The core narrative of Night Is Short, Walk on Girl is that of the usual romantic comedy. In this case, two nameless characters – both University students with a young man referred to as senpai and the young woman referred to as the ‘girl with black hair,’ are caught in a seemingly endless evening of strange and eclectic adventures. The young woman is truly the main protagonist, as the film follows her through the evening as she continually gets caught up in various plots for a variety of secondary characters, and the young man is desperate to finally reveal his true feelings for her. The core emotional elements of the film are the usual romantic comedy pieces, a tried and true path for the film that most audiences will immediately recognize and more than likely connect to on a level beyond just the surface.

This is not why Night Is Short, Walk on Girl works so impressively though. The basis is trope filled and cliché. However, this anime uses those pieces as seeds to grow something much more interesting and grand in scale using its quirky animation and a very creative sense of narrative. This film, even when the animation seems sloppy or perhaps the story seems far too sporadic for its own good, is so confident with the material and its creative choices that everything seems intentional. Right down to just how strange it is as a film. Night Is Short, Walk on Girl is essentially split into a variety of different themed sections as the girl with black hair goes about her night experiencing a variety of odd plot lines. Whether it’s a night of drinking, challenging a notorious drinker with his own specialty alcohol, or battling awkwardness during a used book fair or even a surrealistic and drug induced dream like finale where our Senpai battles a cold, this film does not hold back. In its outlandish approach to its segmented madhouse appeal of a narrative, the film comes out as an impressive piece of exaggerated fantasy. It uses its overzealous animation, punchy dialogue, and exotic concepts to feed off of the seeds of the casual romantic comedy and rises above the usual so that even the most mundane of key moments is seen as unpredictable and splashy.

There are moments when Night Is Short, Walk on Girl does struggle in keeping some kind of threaded cohesion for its audience to follow and in its ambitious fantasy driven slathering of the usual plot and characters it can get lost in its own rabbit holes. The execution of the film is strong, from the charming voice performances to the strangely enigmatic animation, but it can be a bit much for an audience not expecting it.

In the end though, Night Is Short, Walk on Girl might be one of the more memorable films from Japan Cuts 2018 even if the film will occasionally give the audience fits if they try to consume it as the surface level romantic comedy that it uses as its foundation. It’s not a film that would normally stand out for me, but it’s a welcome change of pace and it maximizes its charm and fun with the narrative it uses. It comes highly recommended.