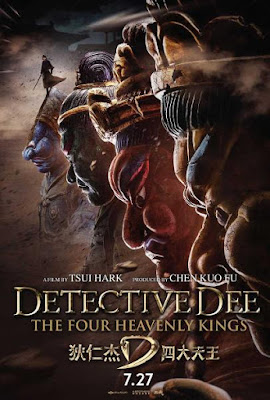 Tsui Hark has been hit or miss for me when it comes to the quality of his films as of late. However, I will admit that the ridiculous fun that he has with the Detective Dee films is infectious. The previous two installments, the first featuring Andy Lau and the second featuring a young Dee portrayed by Mark Chao, are problematic when it comes to cohesive narratives and truly satisfying character development, but the strange things that one will see in the films partnered with charismatic performances make them effective popcorn entertainment. For this reason, it was still easy to be excited for the announcement of the third film in the series, a sequel to Young Detective Dee featuring Mark Chao reprising the role of famous detective, called Detective Dee: The Four Heavenly Kings. Fortunately, this third film does not disappoint. Detective Dee: The Four Heavenly Kings is pure cinematic energy, balancing the sheer charm of its wink-wink attitude with lofty and outlandish gimmicks. The film, like its predecessors, is infectiously fun. Taking a note from the last film, it starts at an ambitiously high level of silliness and entertainment so that by time it hits the finale it has blown the roof out to deliver some of the strangest and most delightfully batshit insane material that this series may ever see. Like the previous two, The Four Heavenly Kings is a film that is going to have a lot of hate thrown its way for its popcorn approach to fantasy wuxia, but with the right mindset then it’s hard not to fall for the charms of this latest Detective Dee film.

Acting as a direct sequel to Young Detective Dee, The Four Heavenly Kings sees our charming and eclectic hero receiving the iconic Dragon Taming Mace for his efforts. This, of course, sets off a series of events that draws him and his cohorts into a possible political upheaval as a mysterious group shows up in town that will have Dee at his wit’s end and relying on his cohorts and some new frenemies to defeat the looming menace.

Narratively speaking, The Four Heavenly Kings is the kind of film that embraces its popcorn and mass audience appeal pretty vigorously. Intriguingly enough, where both of the first films focus on the titular character having some sort of character arc of realization that parallels the mystery on hand (loosely, I suppose) what I found most refreshing in this film is that Dee is more of a catalyst for other character arcs than his own. Between his assistant who is tasked with following a spy/assassin, his friend who is the head of the royal guard and must learn to defy to be able to get to the truth, or even the fantastical monk who doesn’t show up until the third act, this film uses these characters to add the emotional character depth to the film that Dee doesn’t necessarily provide, even if he still remains the protagonist that incites the events. In a way, the film still suffers from some of the same lacking depth that hindered the first two, but its fun approach to the character development along with the continued charismatic performances (that fringe on cartoonish at times) does make this one feel like the strongest of the three in those regards.

This approach to character development adds a lot of fun to what might have been just another fantasy driven mystery that has been popular in big spectacle driven Chinese films as of late. The actual mystery itself is fairly formulaic, where the twists are obviously blue printed out only to be shown as either true or false by some kind of ridiculous reveal. In other words, it’s the same old, same old in terms of Detective Dee films. Still, the film is so outlandish in its characters and gimmicks, between the magician assassins or the mysterious clan of villains, that it remains a lot of fun to consume. Just watch as Tsui Hark tries to justify the insanity with some kind of script that even remotely resembles logic. The film starts off reflecting a bit of wuxia elements, particularly with the assassins, but by the time the third act falls into place, the film does abandon logic and wuxia for the sake of spectacle. Tsui Hark’s strong ability to balance narrative momentum with slick visuals (and some halfway decent CGI that embraces the cartoonish nature of the concept to boot - which always plagued previous films) makes it a riot to watch though and if you think you know how the film is going to end, then let me tell you that you have no idea of what heights the film is going to hit.

The first two Detective Dee films certainly entertain and they create a fun universe that was prime real estate for a mega-franchise. While Detective Dee: The Four Heavenly Kings will not play for everyone, particularly with its popcorn approach to the mystery and just how astoundingly outrageous it gets, this entry is handedly the best of the series. It has a fun and dynamic approach to building up the characters of the Detective Dee universe, the blend of wuxia elements with fantasy mayhem is brain shatteringly awesome, and the film moves at such a brisk pace (even when it pumps the breaks to dig into the various elements of the mystery on hand) that an audience doesn’t have a lot of time to nitpick the narrative or visual elements.

Detective Dee: The Four Heavenly Kings is insane, but I will be damned if it isn’t one of the most entertaining pieces of insane cinema released this year.

Written By Matt Reifschneider
Posted by DarkReif at 10:37 PM