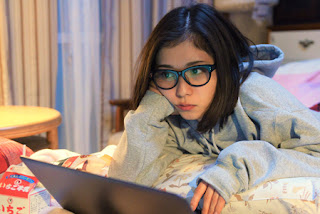 First love is a fickle concept – to an extent we have all experienced this at varying degrees of success. Romanticised over the years in many art forms, this intrinsic rite of passage is rooted in fantasy, usually with one party falling head-over-heels for the other without truly knowing them, rendering the former useless at expressing their desires as realizing their dreams runs the life-ruining risk of shattering the illusion into a thousand pieces and leaving all hopes tarnished and scattered. But you know this, we all do. Telling you this has been a pointless endeavor as it reinforces what we already accept. In much the same way, Akiko Ohku’s frustratingly bland endurance test that is Tremble All You Want covers the same ground as the words above whilst projecting itself as a quirky rom-com socially awkward millennials will find relatable.


Based on Risa Wataya’s acclaimed 2010 novel of the same name the film follows Yoshika Eto, a twenty-four-year-old accountant as she obsesses over her first love Ichi whom she fantasized as Natural Born Prince back in middle school; it is an obsession she relentlessly informs the cast of characters whom she frequently comes into contact. Simultaneously she is thwarting off the advances of her colleague Ni, whom he has made the subject of his affections for some time now, even concocting an elaborate office party just to get close to her. After a bemusing and uncomfortable first date with Ni, Yoshika uses his initial idea to stage a reunion in an attempt to materialize her love with Ichi. As she realizes her place with her first love, we begin to see Yoshika for who she really is: a wallflower who lives almost purely within the realm of fantasy.

In her first leading role, Mayu Matsuoka manages to project this level of social awkwardness with strong determination, but Yoshika is ultimately, tragically, yet another example of one-dimensional character building. During the opening ten minutes the sole focus of her multiple conversations revolves around guys particularly Ichi, played by Dish leader Takumi Kitamura; this monotonous focal point is dragged out for the whole two hours. We also learn of her fascination with extinct animals, especially ammonites, through her nightly Wikipedia reading. Although she expresses remorse over the vast number of extinctions mankind is responsible for, this interest fails to develop Yoshika as an interesting person as it is seldom referenced later – only in an admittedly sweet first conversation with Ichi and as a focal point for her song; one cannot help but also question how much of an interest this truly is (are we supposed to believe interests are fueled by Wikipedia in this day and age?).


Her frequent lack of original thought brings Yoshika’s believability further into question: in an attempt to reunite herself with Ichi, she takes a page from Ni’s (real name Kirishima) book, reducing herself to his level of desperation although we might be led to think of this as ingenuity. Arguably, Matsuoka’s character is as convincing as her relationship with the half-creepy half-forcibly loving Kirishima (Kuroneko Chelsea’s Daichi Watanabe), an arc which resembles that of Stockholm syndrome. In the film’s second act, upon learning how invisible she is to her first love and thereby tentatively abandoning this pursuit, Yoshika’s wellbeing becomes solely reliant on the attention she receives from her colleague; realizing how invisible she really is she unfairly predictably gives in to his ‘affection’. Despite the treatment’s female leadership, one cannot help but feel cheated by the overall message the film relays.

Writhing in a clichéd trope-checklist of a plot with unlikable, self-obsessed, and single-minded characters in unremarkable relationships, there is some light to be shed in Tremble All You Want. The genuinely tender moment between Yoshika and Ichi in their first and final conversation unravels the fragility the pair are enveloped in and guides them beyond their awkwardness. There is a crazy-yet-brief energy bursting with laughter in the zoo date between Yoshika and Kirishima serving as the only high-point in a second act severely lacking in drive and enthusiasm whilst demonstrating the cartoonish sound effects running across the film. All this aside, it is Matsuoka’s performance which shines through, embodying her character’s imperfections – her only redeeming quality – and poignantly straddling the fine line between the real and imaginary worlds she inhabits; it is just a shame her character has been so poorly written/adapted.

None of this is enough to save Ohku’s film from becoming a pointless exercise in generic rehashing. Tremble’s straightforward predictability undercuts any outstanding elements, particularly that of the lead’s decent execution; it’s inevitable conclusion is painfully dragged out by the change in attitude and pace no matter how reflective of Yoshika’s alarmingly deteriorating mental state it is (though perhaps this identifies the loneliness suffered by Japan’s youth). Yet despite the film adding nothing new to the first-love-is-a-dream and the-unlikely-guy-is-who-you’ll-fall-in-love-with tropes it cannot be ignored how it handles the sweetest moment of all: that of a simple embrace. Sadly, the one-dimensionality of all those inhabiting this film’s space is unforgiving and singlehandedly leaves this a largely forgettable rom-com, only without the comedy…or the romance.

Written By Jamie Cansdale
Posted by DarkReif at 10:52 PM