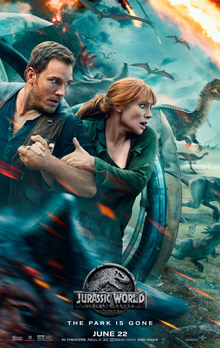 What Fallen Kingdom does well is that is actually attempts to push the franchise into some new territory with some off-kilter elements. All of the volcano jim-jam and rescuing the dinosaurs? That’s the opening act. It’s a clever way for the film to kick things off and get the audience to follow it into the strange territory that it pushes into for its latter acts. We get our dinosaurs running amok on the island, plenty of carnage ensures, villains arise, and Bryce Dallas Howard actually brings boots this time (with a distinct shot of her stepping out in boots to assure the fickle audiences that they heard you loud and clear.) This is Jurassic Park 101 again and it delivers on those thrills that we come to expect. In fact, it’s almost hilarious at how hard they try to all of the formulaic elements into one act, from dinosaur escape scenarios, dinosaur-on-dinosaur throw downs, and even some generic computer hacking plot progressions added for the sake of convenience. The film somewhat forgets to give our protagonists much depth, relying on most of the thin work done in Jurassic World to carry over instead, and even then, the film is so intent on getting in all of the expected moments in this first third that it feels as rushed as all of the dinosaurs and people running down the hillside to the cliff in sheer terror from lava that was so heavily used in the marketing.

Remember though, this is the opening act. The rest of Fallen Kingdom does play out in some weird scenarios, at worst feelingly like the script was a B-grade piece of fan fiction, and I would be lying to not admit that I rolled my eyes at least a dozen times at the strange plot holes and vague plot devices used to keep up the momentum for the audience as it essentially strips everything back for the rest of the film. Instead of just “another” Jurassic Park film for this portion of the run time, Fallen Kingdom then decidedly goes into ‘survival horror’ mode. For those video gamers out there, the idea of a survival horror story with dinosaurs may sound surprisingly similar to the vastly underrated Dino Crisis games developed by the makers of Resident Evil, and that’s exactly how I felt about Fallen Kingdom. Director J.A. Bayona slathers the film in this portion like a gothic horror fairy tale (unsurprisingly there is a thank you credit to Guillermo del Toro at the end of the film) from the use of the mansion setting, familial drama, and the brutal viciousness of the film’s main monster, the Indoraptor. Quite frankly, Bayona directs the living shit out of this portion of the film, stamping his own abilities onto the franchise with distinction. He shoots the Indoraptor like it’s a supernatural slasher killer, coating the setting in the stark use of light and shadows, and proceeds to unleash the power of horror tension that this series hasn’t seen since the original. Even when the film gets more spectacle driven in the third act, it never goes out like previous entries – for better or worse – and keeps it more intimate and intense through the use of its setting and set up.

Unfortunately, Fallen Kingdom does have some major flaws that it just simply struggles to overcome. The previously mentioned plot holes and conveniences can only be carried so far by the direction and entertainment provided. Also, as was previously mentioned, the film jumps over too much of the character development. Sure, both Howard and Pratt come back and can handle the roles through their own screen presence, but their chemistry is thin at best and they are given very little to work with. Most of the secondary characters face the same fate too, including villains and heroes. If anything, some of the dinosaurs have better character arcs than the people, but really Blue the Raptor is the kind of hero we need, but don’t deserve. So there is that.

As the reviews and reactions roll in for Jurassic World: Fallen Kingdom, it’s easy to see that this will be one of the more divisive films of the franchise. Like the rest though, it’s flawed even when it’s being entertaining. The patchy script and poor character development do make it a step down from Jurassic World in most ways. The choice to change out the setting for the last two-thirds can definitely throw off some viewers, but for me it was a bold choice that deserves a lot more praise than it has received. Bayona adds a lot of visual strength to the film and can knock the atmosphere ‘out of the park’ (hell yes) when he wants to even with the very problematic script. Go into Fallen Kingdom with an open mind, enjoy it for the chances it does take (good or bad), and appreciate the fact that it actually pushes the franchise into some new territory.

Written By Matt Reifschneider
Posted by DarkReif at 9:42 PM