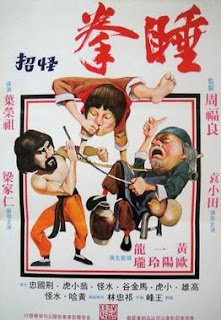 The success of Yuen Woo Ping’s collaborations with Jackie Chan in the last 70s set off a wave of changes in the martial arts cinema world at the time. Not only did it solidify both the actor and the director/choreographer as recognizable names worldwide, but it also shifted the focus that studios and other film makers would use for a rather sizable period of time. Of course, it was the film Drunken Master that really set the stage for most of this and with any kind of surprise success it’s not unrealistic to see a slew of knock offs and replications to arise. This is where Sleeping Fist exists as a film. Yet, despite it’s obvious Drunken Master knock off sequences – going as far as to include Yuen Siu-tien as the quirky old kung fu master – the film is shockingly fun and solid. It’s not nearly as fluid in its story and/or characters as something like Drunken Master, but it certainly has its own charms and uses those to craft a decently fun and humorous kung fu flick…one that is certainly overlooked far too much by the martial arts cinema community.

Policeman Kam Tai-fat (Bryan Leung) has information on a series of crimes committed by an evil kung fu master Cho (Eddy Ko), but before he can submit the information he is forced into hiding and injured badly. Fortunately, he runs into a young orphan called Kid (Wong Yat-lung) who helps him out. Together they have to team with a quirky old kung fu master (Yuen Siu-tien) to be able to defeat Cho and come out of hiding.

Sleeping Fist is the kind of film that may not be all that creative, but it certainly makes it by on charm. It hits many of the regular kung fu movie tropes on its way to telling its story, including finding an old master and learning a new style to defeat a superior villain, but instead of coming off as a bland or unfulfilling regurgitation of the same old story and characters, Sleeping Fist curbs the craving with just enough fun and just enough martial arts excitement to earn itself the title of “underrated gem.” The story is not very well built with a backstory about a policeman with criminal information as a launch pad to get him on the run from a terrible villain (and it’s not wrapped up…at all by the time credits roll) and the ensuing subplots about a rival school and blooming romance feel a bit too underdeveloped to truly add to the overall narrative. However, the plot about the young orphan and his unlikely friendship with this injured policeman and a lonely kung fu master Old Fox work much better than I expected. Beardy does as Beardy always does as a tough and slightly charismatic lead. The Kid can be annoying occasionally, but becomes a welcome balance to Beardy's seriousness. Old Fox is Yuen Siu-tien doing what Yuen Siu-tien does as a quirky tough but lovable teacher. Their interactions, however, is much more heartwarming and fun than I expected and when two or three of them are on screen together the chemistry is very entertaining. In particular, there is a scene where Old Fox uses Kid like a puppet to fight off some hooligans in a restaurant and it’s that kind of fun kung fu that makes Sleeping Fist work – even if the basics and structure are cliché.

Which does lead this review into the action of Sleeping Fist. While it’s not quite as creative or technically slick as that of Yuen Woo Ping pictures from the era, it is replication of the same blend of fast choreography and humor that still hits all the right notes. The combination of Beardy’s strong and technical kung fu with the acrobatics and humor of Wong Yat-lung’s Kid makes for a lot of dynamic sequences (including the previously mentioned puppet fight and many of the training montages). When the film adds in the Sleeping Fist technique in the final act, which is unabashedly a drunken fist knock off, it adds a lot of new levels to the choreography. Balance that with some fun settings including a vineyard/garden for the finale that adds a lot of boundaries and levels to the visuals and the results are a fun and action packed kung fu movie that martial arts fans should check out.

It should be noted that the version I watched for this review is only dubbed and the dubbing can be a bit outrageous at times. It’s not terrible, by any means, but it does have a lot more unintentional hilarity than even I’m used to seeing. The strange echo effect layered scream that comes with Beardy when he yawns while using the Sleeping Fist might be one of the best and/or worst dubbing moments I have ever heard…and it’s kind of awesome in a B-movie sort of way. Keep that in mind when digging into this film.

Still, despite its generic plotting and predictable narrative that pulls heavily from the Drunken Master playbook, Sleeping Fist shares enough chemistry, fun fight sequences, and charm in its performances to easily carry the film. It’s not going to be making many lists for best martial arts films from most anyone, but it’s definitely an overlooked gem that’s worthy of checking out if you like the style of this off beat kung fu flicks. Martial arts fans will definitely want to see it at least once. It’s entertaining enough to recommend that much.